For this week's lab(3), I practiced merging with conflict. I chose to add two features on my goURL program. Then, I filed two issues on Github.

Before this lab, all the coding happens on the master branch. So I made two more branches. These two branches all based on the current state of master.

Then I started work on issue-5 branch git checkout issue-5. After I finished all the coding git commit -m "issue-5 finished". Then, I merged this branch to master

This is a Fast-forward merge. Because the commit pointed to by the branch issue-5 was directly ahead of the commit on the master branch.

Git adds standard conflict-resolution markers to the files that have conflicts.

After you’ve resolved each of these sections in each conflicted file, run git add on each file to mark it as resolved. Staging the file marks it as resolved in Git.

In my situation, too many markers on my main.go. So I found another way to solve the conflict. I am a vim user, and git can specify the mergetool. 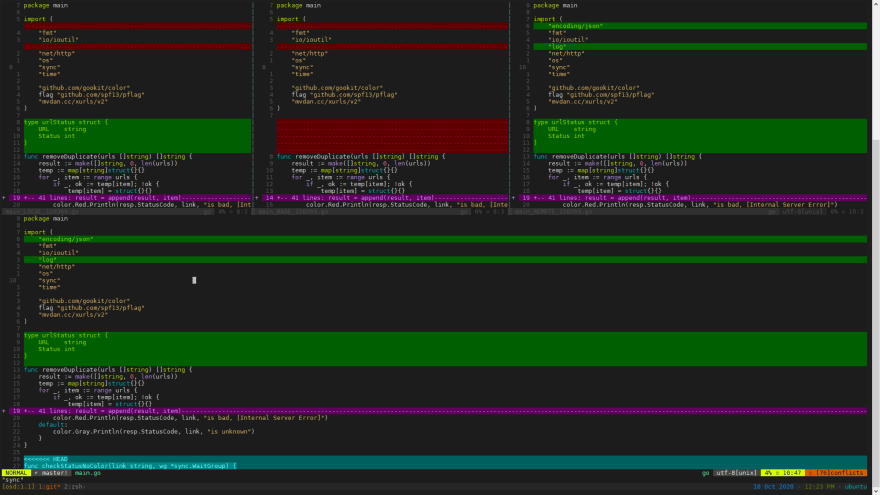 Local changes (master branch in this case) are in the upper-left window, followed by a closest common ancestor and the issue-6 branch in the upper-right corner. The result of the merge is in the bottom window.

Inside vim, :diffget REMOTE or :diffg R to get the REMOTE version. Same as :diffget BASE :diffget LOCAL. ]c [c move by changes. Repeat for every conflict and then run :wqa

It's a long and fun journey to create and deal with the conflict. It simulates the methods when we all work parallel in the opensource world.

Which GitHub repo has the most commits?