When setting up a new project, especially the one that will be worked on by many people (team), code quality is an important aspect to put into consideration to make your codebase cleaner and standardized. That's why we need to use different tools that ensure our code quality. in this tutorial I will walk you step by step into setting up Eslint, Prettier and Husky and getting them ready to work in your next project

For this example, we will be setting up these tools in React Project and we will be using Eslint with Airbnb configurations

that's all you need let's get started...

1. Create a node project
As mentioned I will be starting with code from the first article about creating react app from scratch without create-react-app. currently my folder structure looks like this 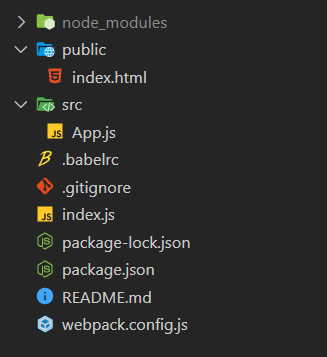 if you are not following the first article you can just create a new folder, open it in VSCode and run npm init -y this will initialize a new node project and add the package.json file.

2. Installing Eslint dependencies
Eslint is a lint for identifying and reporting on patterns found in ECMAScript/JavaScript code. lints or linters are tools that are used to flag programming errors, bugs, stylistic errors, and suspicious constructs to reduce errors and improve the overall quality of your code in some cases they can spot those errors and auto-fix them for you.
Eslint specifically is a popular open-source lint that works best with JavaScript and TypeScript, it allows us to configure and customize it to our needs by specifying your own rules or extending standardized rules from companies like Google, Airbnb...

Run the following command to install ESLint (as a dev dependency)

(note that I chose react as the library, Airbnb as the style guide, and JSON as the file format. You can change these configurations according to your project)

after following the above steps a file named eslintrc.json should be created with the following code (will be auto-generated according to the configuration made above) 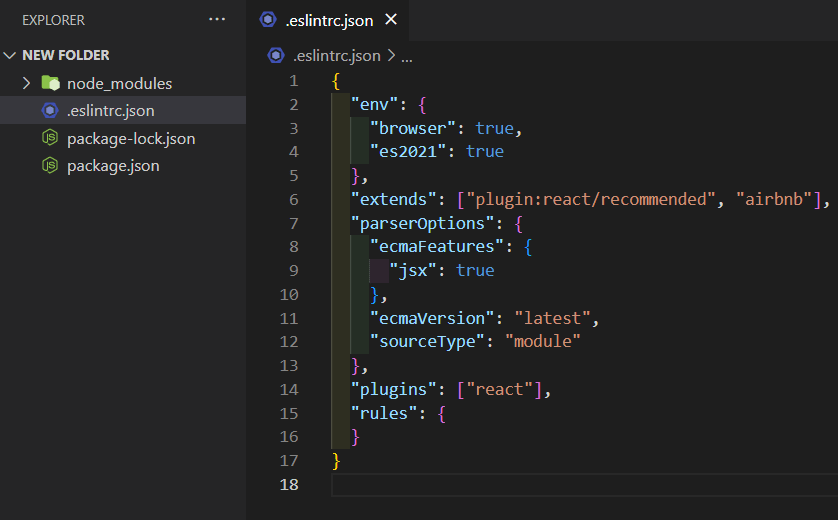 that object of rules:{} is where you can put your own rules if you want to but for now, we are using Airbnb rules as mentioned in "extends": ["plugin:react/recommended", "airbnb"]
For more on eslint rules you can check their official site here

4. Installing Prettier dependencies
prettier is an opinionated code formatter that styles code consistently and is easier to use. it supports HTML, CSS, Javascript, and most of their libraries

you can learn more about these prettier rules and more here

6. Integrating Prettier with ESLint
As mentioned above we will be using Eslint as our linter and prettier as our code formatter. Linters usually contain not only code quality rules, but also stylistic rules. Most stylistic rules are unnecessary when using Prettier, but worse – they might conflict with Prettier! so to use them both safely we had to install eslint-config-prettier dependency

7. Configure scripts
to be able to run ESLint and Prettier we need to add scripts in our package.json as the following

8. Installing Husky
Husky is a tool that allows us to work with Git hooks. Git hooks are scripts that you can set up to run at certain events in the Git lifecycle. like before every commit or push. In our case, we will be using Husky to run ESlint and Prettier as our pre-commit hook so that no one will be able to commit when their code doesn't follow our rules.

Make sure your folder is a git directory

by calling npx lint-staged these commands in this lint-staged object will be triggered and for all .js we would run eslint and on all .js,.css,.md (you can even add html, json if you have any) we would run prettier

9. Try committing
After setting up eslint prettier and husky on every commit we will run lint script to check errors and format script to format our code if any error is found the commit process will be aborted
currently with code from article one if try to commit with git commit I get the following lint errors

The Airbnb style we are using require that you write React code in files with .jsx extensions not .js that's why Eslint is crying. you can either fix these errors or disable the rules
you can learn more about disabling eslint rules HERE

To fix the particular errors in the image above we can rename all files that have jsx to have .jsx extension and make sure we update everywhere those files are referenced from .js to .jsx
run npm run start to make sure everything still works as expected

10. Bonus
for better experience, if you are using VSCode you can install ESLint and Prettier extension that will work better with the above configuration

There you have it! you just configured Eslint prettier and Husky in a node project next time you have a team or an open-source project your code quality will be ensured. I will see you in a next one

Thanks for keeping DEV Community safe. Here is what you can do to flag yvad60:

Unflagging yvad60 will restore default visibility to their posts.