Tailwind CSS is a utility first CSS framework that allows developers to design custom web components without switching to a CSS file. In this guide I will walk you step-by-step through the process of setting up Tailwind CSS in a React project configured from scratch (without using create-react-app). We will install and configure Tailwind CSS and PostCSS, integrate them with CSS and Webpack and finally add Tailwind Styles in our React codebase. (much fun)

Attention!
This article is a fourth part in the series of setting up a React environment from scratch. Throughout this series we already set a React project from scratch, installed ESLint, Prettier and husky, configured the testing environment with Jest and React Testing Library and In this part we will base on that progress and add Tailwind CSS for styling.

You can find the starting code from this GitHub repo

let's have an overview of the tools we will be using.

Why Tailwind CSS?
Tailwind CSS is self-described as a utility first CSS framework. Rather than focusing on the functionality of the item being styled, Tailwind is centered around how it should be displayed. With

Rapidly build modern websites without ever leaving your HTML.

With Tailwind you can style directly from your html or jsx using Tailwind CSS predefined classes to enable you write CSS in a more elegant and faster way. This doesn't mean you should always use Tailwind as it can be an overkill for small projects and requires a decent understanding of CSS. Learn more about Tailwind CSS HERE.

PostCSS
PostCSS is a tool for transforming styles with JavaScript plugins. and these plugins can improve your styles in many different ways. for instance the way we have ESLint for JavaScript PostCSS allows you to use plugins that can detect errors in your CSS code, or use next generation CSS syntax (kinda like Babel for CSS) and much more. Tailwind CSS is one of these plugins therefore to use Tailwind we need PostCSS installed.
Learn more about PostCSS HERE

We will come back to these tools in more details later, for now let's get started.

2. Configuring Tailwind CSS
in the root folder create a file named tailwind.config.cjs which will hold your configurations and customizations for Tailwind,
we named it with a .cjs extension because we we will be using therequire syntax in ES module

in the tailwind.config.cjsadd the following code

4. Configuring PostCSS
in the root folder create a file named postcss.config.cjs which will hold your configurations for PostCSS, and add the following code

5. Inject Tailwind in the CSS file
We Installed and configured Tailwind CSS and PostCSS in our codebase but how do we add Tailwind CSS in our React components. as mentioned above, Tailwind CSS uses predefined classes that corresponds to actual CSS properties. technically we still need to have css files even if we are not directly writing CSS.

6. Support CSS with Webpack
In the first article configured our react project with Webpack for bundling all files into a single javascript file that is served with our index.html.
The thing with Webpack is that it doesn't support files out of the box every time we add new types of files, we need to make Webpack recognize them using it's loaders and we did the same thing for .js and jsx files in the first article.

in this article we just added a .css file in our codebase therefore we need to install loaders for CSS so that Webpack can recognize it

Run the following command to Install Webpack CSS loaders (as a dev dependencies).

After installing these loader we need to add them in our webpack.config.js by adding a new rule in the modules object

finally your full webpack.config.js should look like the following

we just added tailwind class to change our text the primary color we configured in tailwind.config.cjs, increase font size made text bold 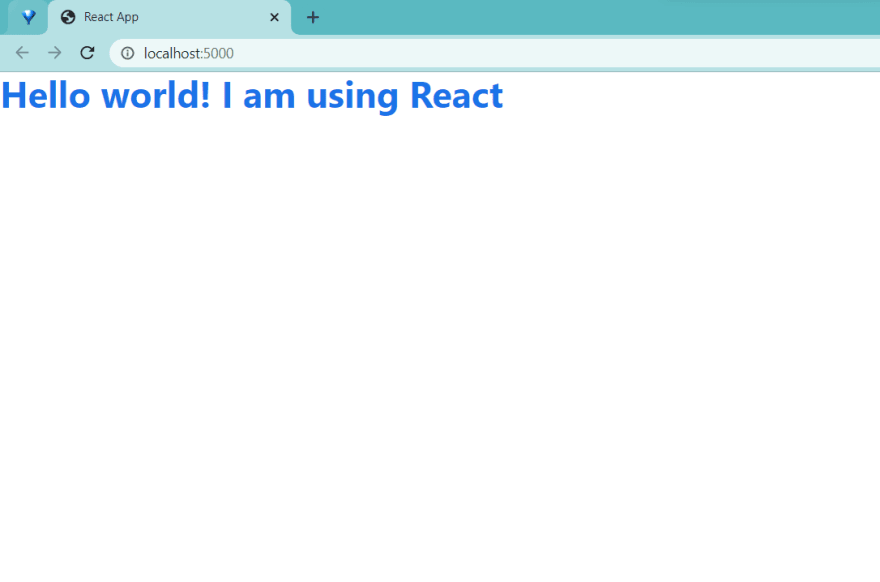 There you have it! that's how you configure Tailwind CSS in a react project configured from scratch with Webpack. you can find code for this article on this GitHub Repo

What about tests?
Currently if you try to run tests (npm test) they will fail as imported a CSS file and by default Jest doesn't understand CSS files therefore we will need to mock them and this will be the topic for the next article...