In the previous chapter we have discussed a breif outline, the platforms, hardware and software, and perfromance hints The Complete Performance Story.

In this chapter we are going to discuss some intersting performance entries. We will understand the difference between:

An Approach to Performance Testing

The first principle is that testing should occur on the actual product in the way the product will be used. There are, roughly speaking, three categories of code that can be used for performance testing, each with its own advantages and disadvantages. The category that includes the actual application will provide the best results.

The first of these categories is the microbenchmark. A microbenchmark is a test designed to measure a very small unit of performance, exmples:

Points to take care of
Consider the following code that measures the performance of different implementations of a method to compute the 50th Fibonacci number:

The previous code has the following issues:
1- Microbenchmarks must use their results: The biggest problem with this code is that it never actually changes any program state. Because the result of the Fibonacci calculation is never used, the compiler is free to discard that calculation. A smart compiler will end using the following code:

Why?: because you have never used the l variable in your code, so the compiler will assume that this is a redundant code, removing it before executing.
Solution try to consume the l variable with any method you like.

2- Microbenchmarks must not include extraneous operations: This code performs only one operation: calculating the 50th Fibonacci number. A very smart compiler can figure that out and execute the loop only once—or at least discard some of the iterations of the loop since those oper‐ ations are redundant.
Additionally, the performance of fibImpl(1000) is likely to be very different than the performance of fibImpl(1); if the goal is to compare the performance of different im‐ plementations, then a range of input values must be considered.
The easy way to code the use of the random number generator is to process the loop as follows:

3- Microbenchmarks must measure the correct input: The third pitfall here is the input range of the test: selecting arbitrary random values isn’t necessarily representative of how the code will be used. In this case, an exception will be immediately thrown on half of the calls to the method under test (anything with a negative value). An exception will also be thrown anytime the input parameter is greater than 1476, since that is the largest Fibonacci number that can be represented in a double.
Consider this alternate implementation:

If that this implementation is very slow "solwer that the first one in point #2", It will give better perforamnce results because the input range checks in it lines 1, and 2.

4- No warmup period: The previous implementation doesn't offer a warm-up peroid which is important because that One of the performance characteristics of Java is that code performs better the more it is executed, a topic that is covered in Chapter 4, something realted to the JIT compilers in java.
So the final version of the performance test should be as the following:

The best thing to use to measure performance of an application is the application itself, in conjunction with any external resources it uses. Testing the whole application with all the external resources is called Macrobenchmark.
Complex systems are more than the sum of their parts; they will behave quite differently when those parts are assembled. Mocking out database calls, for example, may mean that you no longer have to worry about the database perfor‐ mance—and hey, you’re a Java person; why should you have to deal with someone else’s performance problem?
The other reason to test the full application is one of resource allocation. In a perfect world, there would be enough time to optimize every line of code in the application. In the real world, deadlines loom, and optimizing only one part of a complex environment may not yield immediate benefits.

Java EE engineers tend to use that term to apply to something else: bench‐ marks that measure one aspect of performance, but that still execute a lot of code.
An example of a Java EE might be something that measures how quickly the response from a simple JSP can be returned from an application server. The code involved in such a request is substantial compared to a traditional microbenchmark: there is a lot of socket-management code, code to read the request, code to find (and possibly compile) the JSP, code to write the answer, and so on. From a traditional standpoint, this is not microbenchmarking.
This kind of test is not a macrobenchmark either: there is no security (e.g., the user does not log in to the application), no session management, and no use of a host of other Java EE features.
So this is called a Mesobenchmark

Many of the examples throughout the book are based on a sample application that calculates the “historical” high and low price of a stock over a range of dates, as well as the standard deviation during that time. Historical is in quotes here because in the application, all the data is fictional; the prices and the stock symbols are randomly generated.

The sample applications typically deal with a collection of these prices, representing the history of the stock over a period of time (e.g., 1 year or 25 years, depending on the example):

The basic implementation of this class loads a set of prices from the database:

The architecture of the samples is designed to be loaded from a database, and that functionality will be used in the examples in Chapter 11. However, to facilitate running the examples, most of the time they will use a mock entity manager that generates random data for the series.

The second principle in performance testing involves various ways to look at the ap‐ plication’s performance. Which one to measure depends on which factors are most important to your application.

The simplest way of measuring performance is to see how long it takes to accomplish a certain task, example:

In the non-Java world, this testing is straightforward: the application is written, and the time of its execution is measured. In the Java world, there is one wrinkle to this: just-in-time compilation which means that the program needs some time to be fully optimized [that's why we needed the warmup in the previous section code].

A throughput measurement is based on the amount of work that can be accomplished in a certain period of time.
Notes:

The last common test is one that measures response time: the amount of time that elapses between the sending of a request from a client and the receipt of the response.
Difference between response time and throughput is that the client threads in a response time test sleep for some period of time between operations. This is referred to as think time.
When think time is introduced into a test, throughput becomes fixed: a given number of clients executing requests with a given think time will always yield the same TPS.
example:
The simplest way is for clients to sleep for a period of time between requests:

In this case, the throughput is somewhat dependent on the response time.
There is another alternative is known as cycle time (rather than think time). Cycle time sets the total time between requests to 30 seconds, so that the time the client sleeps depends on the response time:

This alternative yields a fixed throughput of 0.033 OPS per client regardless of the re‐ sponse time (assuming the response time is always less than 30 seconds in this example).

There are two ways of measuring response time. Response time can be reported as: 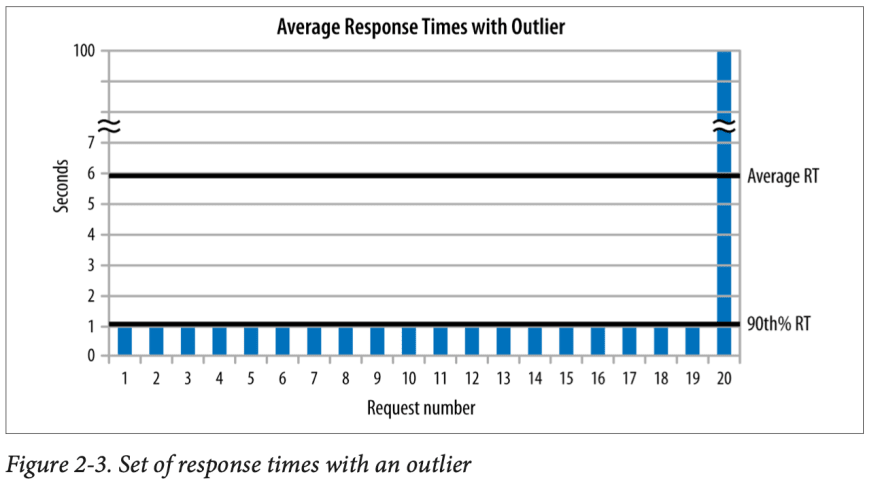 The third principle involves understanding how test results vary over time. Programs that process exactly the same set of data will produce a different answer each time they are run. Why? because of the following:

You must consider statstics while measuring performance of an application, run the test many times to be more confident of your results.

Fourth and finally, performance geeks like to recommend that perfor‐ mance testing be an integral part of the development cycle.

The typical development cycle does not make things any easier. A project schedule often establishes a feature-freeze date: all feature changes to code must be checked into the repository at some early point in the release cycle, and the remainder of the cycle is devoted to shaking out any bugs (including performance issues) in the new release. This causes two problems for early testing:

Early, frequent testing is most useful if the following guidelines are followed:

C- Run on the target system

A test that is run on a single-core laptop will behave very differently than a test run on a machine with a 256-thread SPARC CPU. That should be clear in terms of threading effects: the larger machine is going to run more threads at the same time, reducing contention among application threads for access to the CPU. At the same time, the large system will show synchronization bottlenecks that would be unno‐ ticed on the small laptop.
Hence, the performance of a particular production environment can never be fully known without testing the expected load on the expected hardware. Approxima‐ tions and extrapolations can be made from running smaller tests on smaller hard‐ ware, and in the real world, duplicating a production environment for testing can be quite difficult or expensive.

Play a sport to work your brain effectively, Exercise your body. 🏊

Getting started with .NET MAUI (iOS) on an M1 Mac