Recently I started a small activity in Twitter called #monadicmonday – each Monday I post a thread about some FP stuff which is useful and is easy to start using right away. Each month I will be doing a compilation of 4 weeks for those who prefer to read long articles.

These is a monad which expresses "inclusive-OR" relation:

It may be present in FP libraries under it's literal name "These" (Haskell, TypeScript), or under "Ior" name (like in Scala's cats package).

Take a look at the following function in TypeScript using These monad from fp-ts package by @GiulioCanti:

Now let's look at the examples. Note that we need to provide all possible "handlers" to fold function, so the monad could be reduced to a single value.

Now let's transform this code to a full example:

Welcome to the second episode of #monadicmonday! Today we'll talk about algebraic data types, and more specifically – about semirings and rings.

First of all, let's recap what a semiring is. Semiring is a set equipped with two binary operations, called "addition" and "multiplication". The intuition that works here is such of natural numbers – you can define a semiring for Nat with addition as "+" and multiplication as "*"

A ring extends a semiring with an additional "inverse" operation (or, strictly speaking, ring implies that for each 'a' there exists '-a'). Rings and semirings must also have "zero" and "one" elements, and multiplication should distribute over addition.

The other important characteristic is that rings and semirings form a monoid under multiplication.
Recap: monoid is defined using two operations:

Let's define a ring instance for Option (Maybe) data type. We can define it in several possible ways, and it depends on how we treat "None" value. I've called those instances "safe ring" and "strict ring".

Given a few different Option instances, we can observe different behavior of our rings:

Or we can mix&match a bit:

If you can identify a structure as a (semi)ring, you can use its properties with confidence. For example:

Semiring is sometimes defined as a monoid on + and a semigroup on *, i.e. 0 is mandatory but 1 is not. Then, Rig adds 1 only, Rng adds negation only, and Ring has both.

I would like to give credit to @LukaJacobowitz for his awesome article "A Tale on Semirings", which I recommend for reading: https://lukajcb.github.io/blog/functional/2018/11/02/a-tale-of-semirings.html

In this episode we'll talk about quite complicated topic – recursion schemes. Hold tight, as the ride won't be easy.

First of all, I would like to stress that I'm still grokking this topic, so if you spot a mistake, please ping me back!

Recursion schemes are powerful way to generalize various recursion algorithms and make them composable and easy to reason about. Importance of recursion schemes for FP is of the same scale as importance of design patterns for OOP. I would like to give credit to @importantshock for his magnificent work on blog "Adventures in Uncertainty", which is the most thorough and detailed intro to recursion schemes I know: https://blog.sumtypeofway.com

There is a plethora of recursion schemes, to name a few:

As usual, I will illustrate my examples in Haskell-esque type definitions and TypeScript with fp-ts library for the solution itself.
Let's solve a problem: given a desired amount N, and an infinite supply S = { S1, S2, .. , Sm} of coins, how many ways can we make the change?
BTW, this problem is described in great details in various tutorial blogs (like (link: https://www.geeksforgeeks.org/coin-change-dp-7/) geeksforgeeks.org/coin-change-dp…), so I won't be describing the solution approach here. Instead I will show you how to implement it using a histomorphism.

Well, I guess these parts require some additional explanation.
Course-of-value algebra allows us to access the additional payload (attribute) of current recursive term, as well as fall deeper into it's hole.

Cofree comonad is a good topic for another Monadic Monday, so today I will just say that it's a way to "mark" a recursive term with an additional marker of type a.

A Fix is an Y-combinator (fixpoint combinator) on the type-level, so it just represents an infinite sequence of type application:

You can think about list as a math isomorphism https://twitter.com/xgrommx/status/880560506385252353
1) Understanding via abstraction (build a new abstraction)
2) Math isomorphisms
3) Category theory (Category of F-algebras)

To begin solving our coin change problem, let's define our auxillary types in TypeScript. We will need:

The implementation of histo itself is identical to it's Haskell original from https://blog.sumtypeofway.com/recursion-schemes-part-iv-time-is-of-the-essence/:

To begin with the solution, we'll need to define two helper which convert a common JavaScript number into Nat and vice versa:

Finally, let's define change function, which differs from the one @importantshock described in his article. My implementation stores not just a number of ways given amount can be exchanged – this information is insufficient for the correct solution. Instead, I store the exact solutions for each amount. This gives me an additional bonus: I can print not only a number of ways, but the ways themselves! That's why my NatC instance for Cofree was holding not just a number, but an array of number arrays.

And here's the result of running change for amounts of 15, 20 and 42 cents. We get not only valid sum, but all possible ways of change, too: 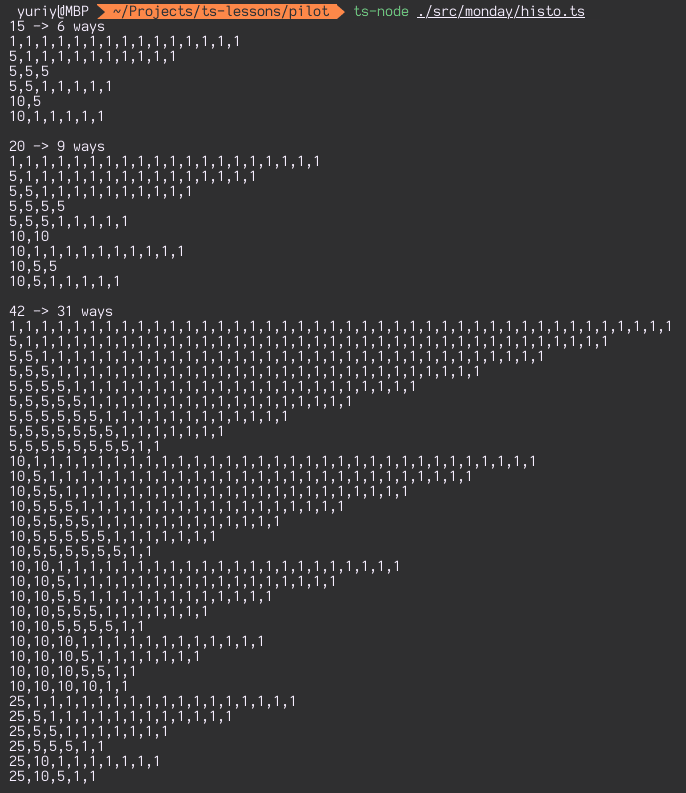 Episode 4: Either and co.

In this episode we'll talk about specialized variants of Either monad.

The first one I'd like to show is awesome RemoteData from @devexperts : https://github.com/devex-web-frontend/remote-data-ts

This allows a developer to always handle erroneous and pending states of a network request – which, obviously, is a common thing among web devs.

Using RemoteData, I usually build my Redux store in the following way:

One positive consequence of RemoteData lies outside of code. My co-developers are "forced" to think about pendings (=loading) and failures (=errors), so they ask designers to provide explanation of system's behavior in all situation, so system can never be in inconsistent state.

The other useful ADT I would like to expose is Validation. It looks and behaves similar to Either, with one defference: it's not a monad, but an applicative functor. I recommend reading great article by @GiulioCanti: https://dev.to/gcanti/getting-started-with-fp-ts-either-vs-validation-5eja

Another useful monad, These, was described in the first episode: https://twitter.com/YuriyBogomolov/status/1112712151062458370. It's not an extension of Either like RemoteData, but carries similar to Either business semantics.

These were the topics covered during April's Monadic Mondays. Please let me know what do you think of it! I would be happy to get your feedback, so please ping me back at @ybogomolov in Telegram, @YuriyBogomolov in Twitter or via yuriy.bogomolov@gmail.com.