The distribution of a statistical dataset is the spread of the data which shows all possible values or intervals of the data and how they occur.

A distribution is simply a collection of data or scores on a variable. Usually, these scores are arranged in order from ascending to descending and then they can be presented graphically.

The distribution provides a parameterized mathematical function which will calculate the probability of any individual observation from the sample space.

Data is a collection of information (numbers, words, measurements, observations) about facts, figures and statistics collected together for analysis.

Common Data Types
Before we jump on to the explanation of distributions, let’s see what kind of data can we encounter. The data can be discrete or continuous.

Continuous Data can take any value within a given range. The range may be finite or infinite. For example, A girl’s weight or height, the length of the road. The weight of a girl can be any value from 54 kgs, or 54.5 kgs, or 54.5436kgs.

Example: Distribution of Categorical Data (True/False, Yes/No): It shows the number (or) percentage of individuals in each group.

Distribution of Numerical Data (Height, Weight and Salary): Firstly, it is sorted from ascending to descending order and grouped based on similarity. It is represented in graphs and charts to examine the amount of variance in the data.

For example, The most common measures of how sample differs from each other is the standard deviation and standard error of the mean.

Difference between Frequency and Probability Distribution

Probability Distribution
-List of Probabilities associated with each of its possible numerical values.
-It records the likelihood that an event is to occur. It is based on theoretical assumption of what should happen

A special case of binomial distribution. It is the discrete probability distribution and has exactly only two possible outcomes – 1(Success) and 0(Failure) and a single trial.

A famous example is the coin flip, in which we could call either side a success. The probability of success is 0.5. This would lead to the following graph: 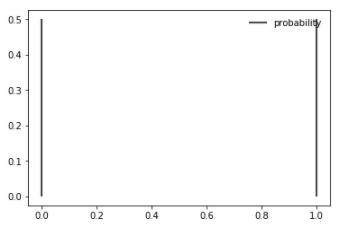 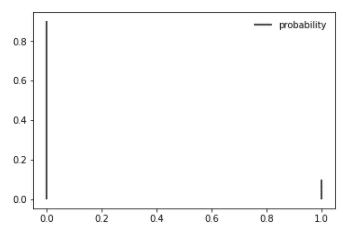 The probabilities of success and failure need not be equally likely, like the result of a fight between me and Undertaker. He is pretty much certain to win. So in this case probability of my success is 0.15 while my failure is 0.85 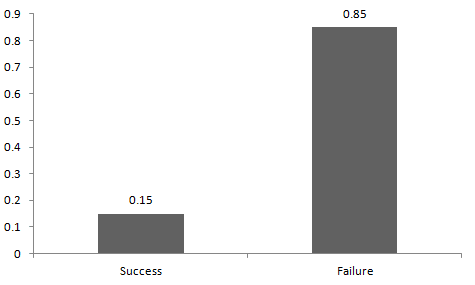 The variance of a random variable from a bernoulli distribution is:

There are many examples of Bernoulli distribution such as whether it’s going to rain tomorrow or not where rain denotes success and no rain denotes failure and Winning (success) or losing (failure) the game.

It is otherwise known as Gaussian Distribution and Symmetric Distribution. It is a type of continuous probability distribution which is symmetric to the mean. The majority of the observations cluster around the central peak point.

It is a bell-shaped curve. 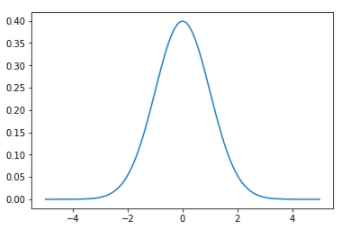 Human IQ is also a very famous example of the normal distribution, where the average is 100 and the standard deviation is 15. Most people are average intelligent, some are a bit smarter or a bit less smart, and few are very intelligent or very unintelligent.

The PDF of a random variable X following a normal distribution is given by:

The mean and variance of a random variable X which is said to be normally distributed is given by:

Here, µ (mean) and σ (standard deviation) are the parameters.
The graph of a random variable X ~ N (µ, σ) is shown below. 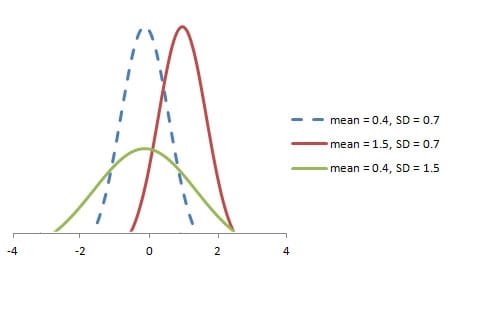 A standard normal distribution is defined as the distribution with mean 0 and standard deviation 1. For such a case, the PDF becomes:

The most widely known discrete probability distribution. It has been used hundreds of years. 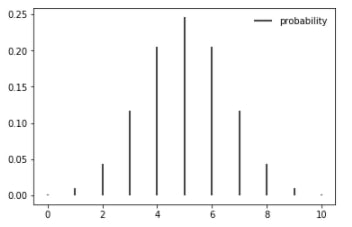 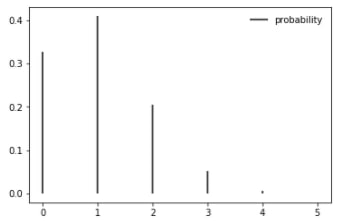 The mathematical representation of binomial distribution is given by:

The mean and variance of a binomial distribution are given by:

It is the discrete probability distribution of the number of times an event is likely to occur within a specified period of time. It is used for independent events which occur at a constant rate within a given interval of time.

The occurrences in each interval can range from zero to infinity (0 to α). 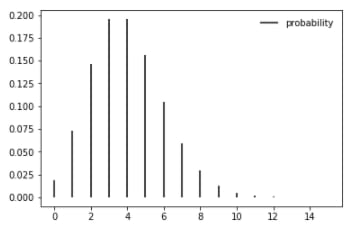 Other examples of Poisson events could be the number of cars passing at a certain location. Also, almost anything that has a count per unit time could be considered for a Poisson distribution.

Let µ denote the mean number of events in an interval of length t. Then, µ = λ*t.

The PMF of X following a Poisson distribution is given by:

The mean µ is the parameter of this distribution. µ is also defined as the λ times length of that interval. The graph of a Poisson distribution is shown below:

The graph shown below illustrates the shift in the curve due to increase in mean.

It is perceptible that as the mean increases, the curve shifts to the right.

The mean and variance of X following a Poisson distribution:

It is a continuous or rectangular distribution. It describes an experiment where an outcome lies between certain boundaries.

A variable X is said to be uniformly distributed if the density function is:

The graph of a uniform distribution curve looks like

For a Uniform Distribution, a and b are the parameters.

The number of bouquets sold daily at a flower shop is uniformly distributed with a maximum of 40 and a minimum of 10.

Let’s try calculating the probability that the daily sales will fall between 15 and 30.

Similarly, the probability that daily sales are greater than 20 is = 0.667

The mean and variance of X following a uniform distribution is:

It deals with continuous variables which take on a wide range of values such as individual call times. Based on which we can model probabilities across any range of possible values using a gamma distribution function. First one is shape parameter (α) and the second one is scale parameter (β).

It takes two parameters: the lambda parameter of the exponential distribution, plus a k parameter for the number of events to wait for.

As an example, you can think of an attraction park that can only launch an attraction when it is full, let’s say, 10 people. If they have an event rate of 4 customers coming in every 2 minutes on average, they could describe the waiting time for launching the attraction using a Gamma distribution.

The amount of rainfall accumulated in a reservoir.
The size of loan defaulters and aggregation of insurance claims 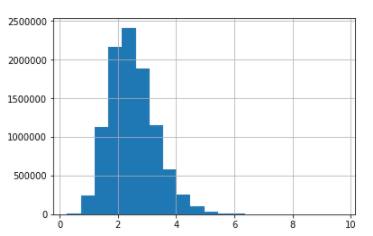 It is concerned with the amount of time until some specific event occurs.

It takes the same parameter as the Poisson distribution: the event rate. In some cases, however, (amongst others in Python’s Scipy) people prefer to use the parameter 1 / event rate.

Note: Reliability deals with the amount of time a product lasts. 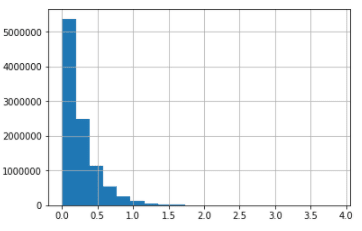 How to create High Availability Architecture using S3 and CloudFront?

Once unpublished, this post will become invisible to the public and only accessible to yaswanthteja.

Thanks for keeping DEV Community 👩‍💻👨‍💻 safe. Here is what you can do to flag yaswanthteja:

Unflagging yaswanthteja will restore default visibility to their posts.