Kubernetes has been used heavily on production for the past few years. It offers a plethora of solutions for orchestrating your containers using its declarative API. One of the prominent feature of Kubernetes is its resilience with the ability to perform Rolling and Rollback Deployments.

Deployment is one of the mechanisms for handling workloads (applications) in Kubernetes. It is managed by Kubernetes Deployment Controller.

In Kubernetes, controllers are control loops that watch the state of your cluster, then make or request changes where needed. Each controller tries to move the current cluster state closer to the desired state.

If any of our pod instances should fail or update(a status change), the Kubernetes system responds to the difference between manifest spec and status by making a correction, i.e. matching the state of Deployment as defined on the spec.

Deployment under the hood

Deployment is an abstraction over ReplicaSet. Under the hood, Deployment creates a ReplicaSet which in turn creates pods on our cluster. As per the name, ReplicaSet is used for managing the replicas of our pods.

In summary, Controller reads the Deployment spec, forwards the pod configuration to ReplicaSet and then it creates the pods with proper replicas.

Rollback Deployment means, going back to the previous instance of the deployment if there is some issue with the current deployment.

Let’s get our hands-on with Kubernetes and see how these deployment strategies are carried out.

We will setup a single node Kubernetes cluster on our local machine using KinD (Kubernetes in Docker). Make sure you have Docker running.

We will create a K8s cluster using:

With our cluster ready we are ready for Deployments.

For the purpose of this tutorial, we won’t be touching any YAML files and will be fully utilizing the power of kubectl CLI tool.

Like mentioned earlier, a Deployment creates a ReplicaSet followed by Pods. You can check these newly created resources using:

You can check to make sure the Replicaset was created by our Deployment using: 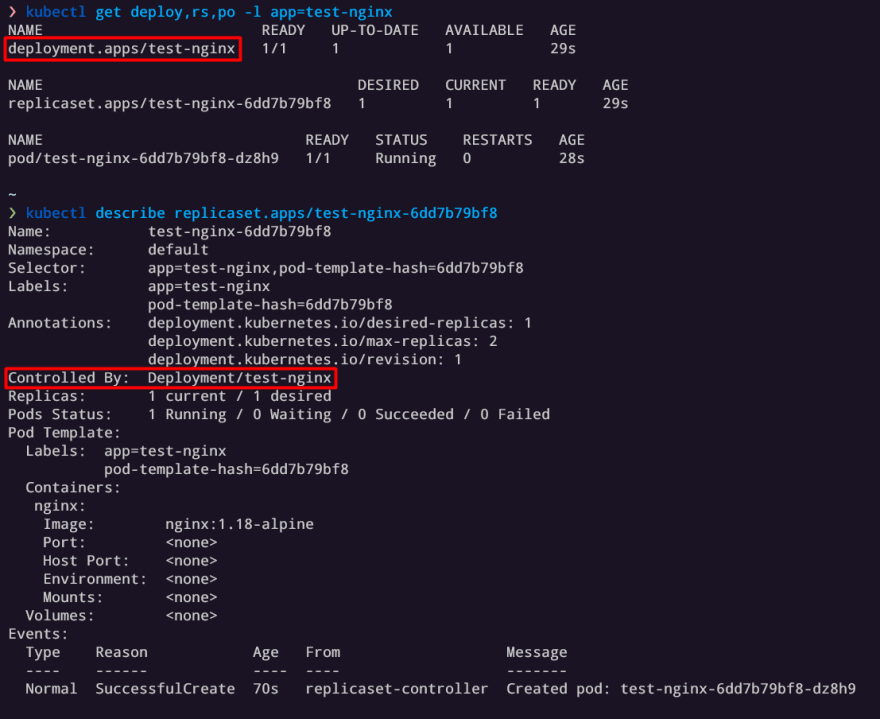 You can do the same with Pods:

Let’s scale the deployment to have 3 instances of nginx pods.

Now that we have significant number of pods on our cluster. Let’s try out the Deployment strategies.

Let’s say you were having some issues with v18 of nginx and the v19 fixes it for you. You need to rollout a new update of nginx image to your pod.

By updating the image of the current pods (state change), Kubernetes will rollout a new Deployment. 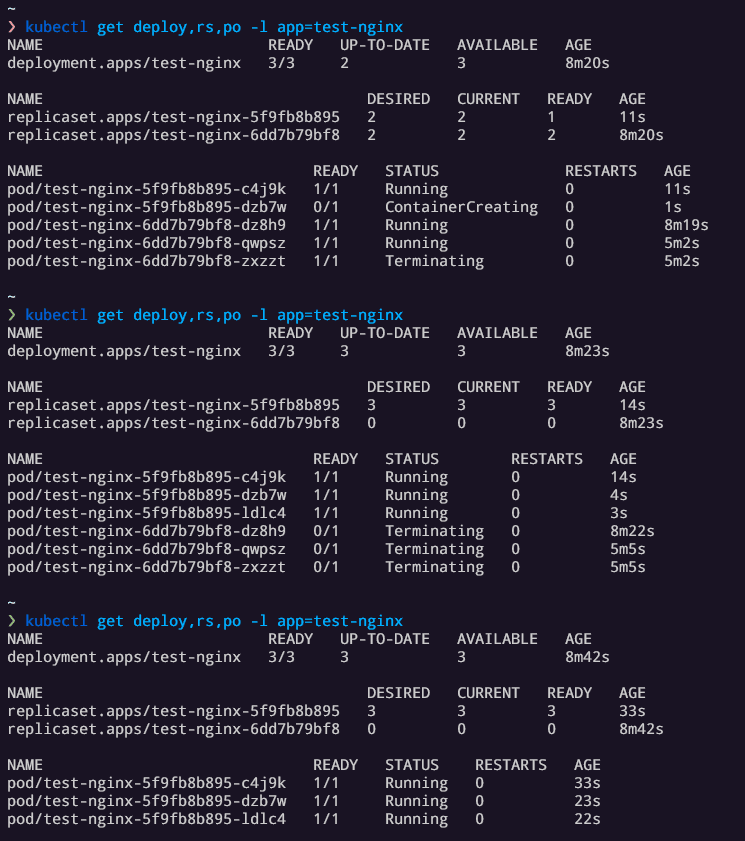 We can see Kubernetes at work, making sure the pods are maintained properly. The last of the old pod doesn’t get terminated until the complete replicas for the new pods are created. The old pods also have a grace period which makes sure the traffic it is serving isn’t disconnected for certain time until the requests can be safely routed to the newly created pods.

We successfully updated all our pods to use nginx v19. 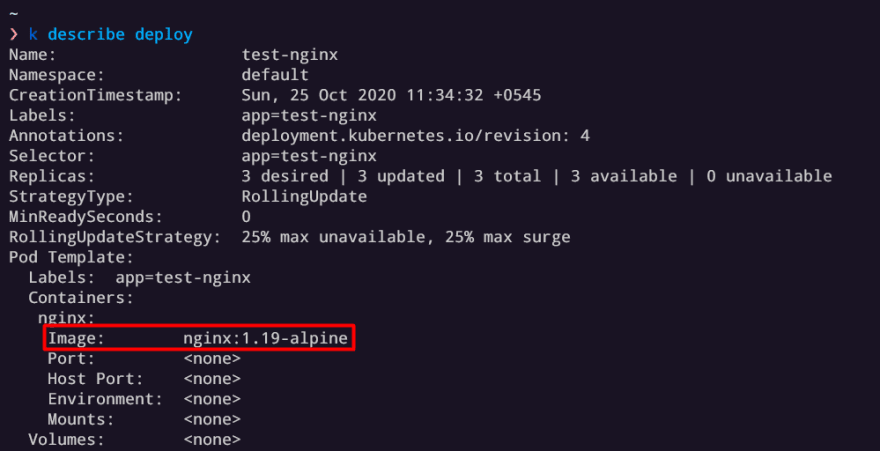 Let’s assume the new nginx update has even more problems than the last one and now you realized how blissful life was with the old version. Time for a rollback to the previous version of nginx.

But how do we do that? You might have noticed that there are now two ReplicaSets. It’s due to the same Deployment pattern we discussed earlier, we update our Deployment, it creates a new ReplicaSet which creates new Pods. Kubernetes holds history of up to 10 ReplicaSet by default, we can update that figure by using revisionHistoryLimit on our Deployment spec.

These history are tracked as rollouts. Only the latest rollout is active.

By now, we have made two changes to our Deployment test-nginx so the rollout history should be two. 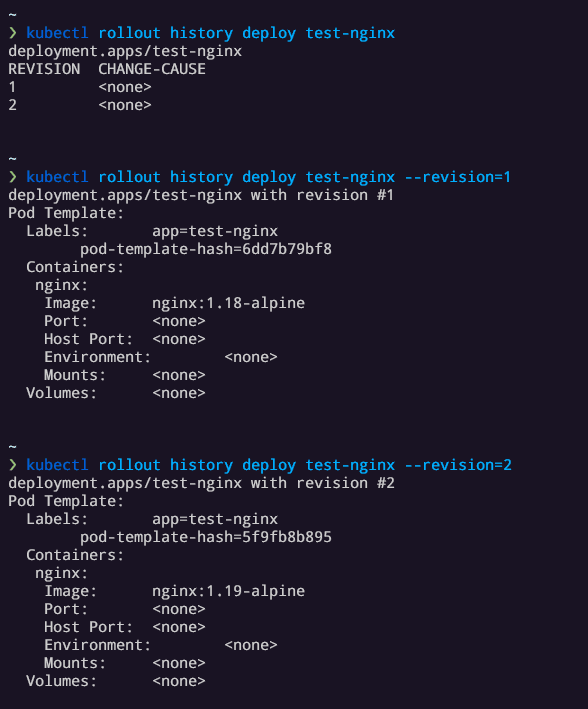 Alright let’s get to rolling back our update to the previous rollout. We want to rollback to the stage where we were using nginx v18 which is rollout Revision 1. 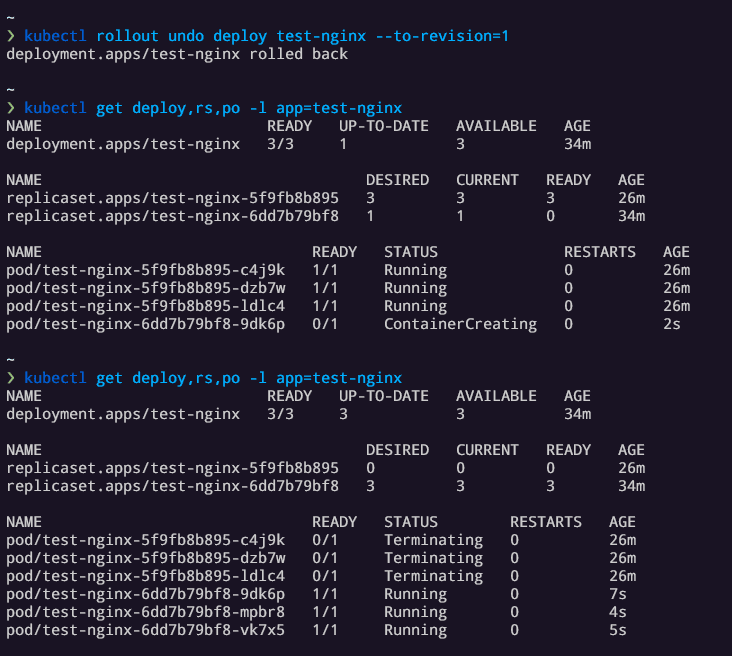 Like the Rolling Update Deployment, the Rollback Deployment terminates the current pods and replaces them with the pods containing the spec from Revision 1. 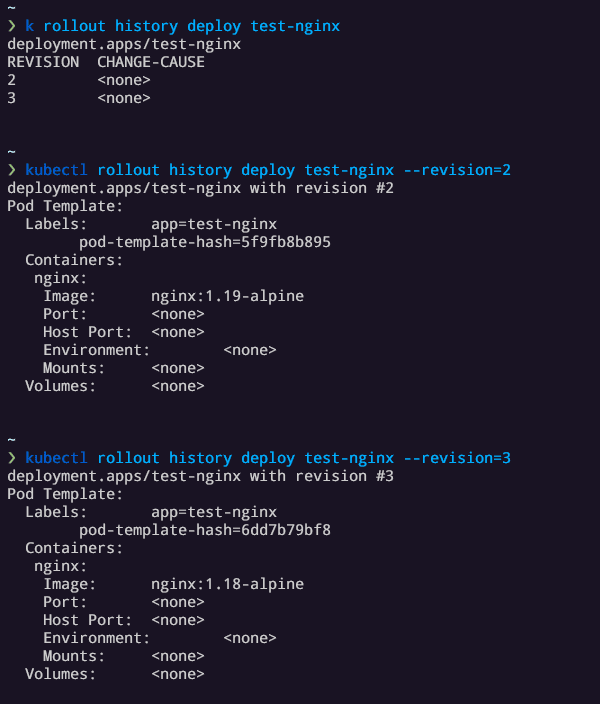 Now we are back on the nginx v18. with the Rollback Deployment. You can check that out by: 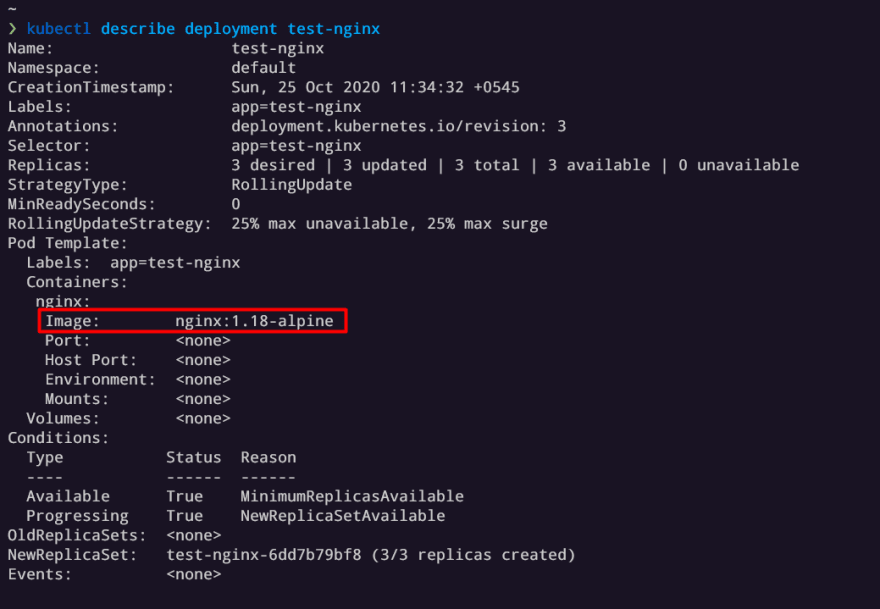 Kubernetes makes it easy to control the Deployment of our applications with these strategies. This was just a rundown of how Rolling and Rollback Update Deployments work from a ground level. In real-life, we rarely do all these steps manually, since we hand it down to our CI/CD pipeline like ArgoCD.

Thank you for reading. Hope this guide has been helpful for you to understand how Rolling and Rollback Deployments work in Kubernetes. If you have any corrections, suggestions, or feedback feel free to DM me on Twitter or comment down below.

How to Make an Awesome Horizontal Parallax Animation