Let’s start with a story about where I’m coming from. When I was 12, I was going on 10-20 mile rides and dreaming of someday biking the STP.

When I was 14, I went on a bike camp tour of the northwest and got in a crash doing 30mph. When I was 16, my regular loop was 15 miles and included over a thousand feet of climb. My beautiful bike got stolen in college, and it took me a long time to get back to riding, but I did. When I was 40, I came the closest I’ve ever managed to riding a century – 100 miles. I had to stop at mile 76, and I’m not ashamed to admit I cried.

Since I was 14, I’ve been fighting “tender hands”. That’s the bike-nerd term for numbness, pain, and tingling from resting weight on your palms. Today I “graduated” from physical therapy, for the umpteenth time. I have tendinitis in my elbow because, it turns out, my wrists are part of Team Hypermobile, and my forearm was trying to keep shit together, and that was straining the elbow. I have weird-ass bike handlebars that let me put my hands a lot of different ways. I’ve raised the handlebar, all sorts of things. When I stopped at mile 76 of that century? It’s because I was literally pissing blood. It turns out my hands aren’t the only tender parts of me. I’ve spent so much time and effort on saddles, fitting, and trying to increase endurance or cushion shock. Many things have made it better, nothing has solved the problem.

I just bought a recumbent trike. 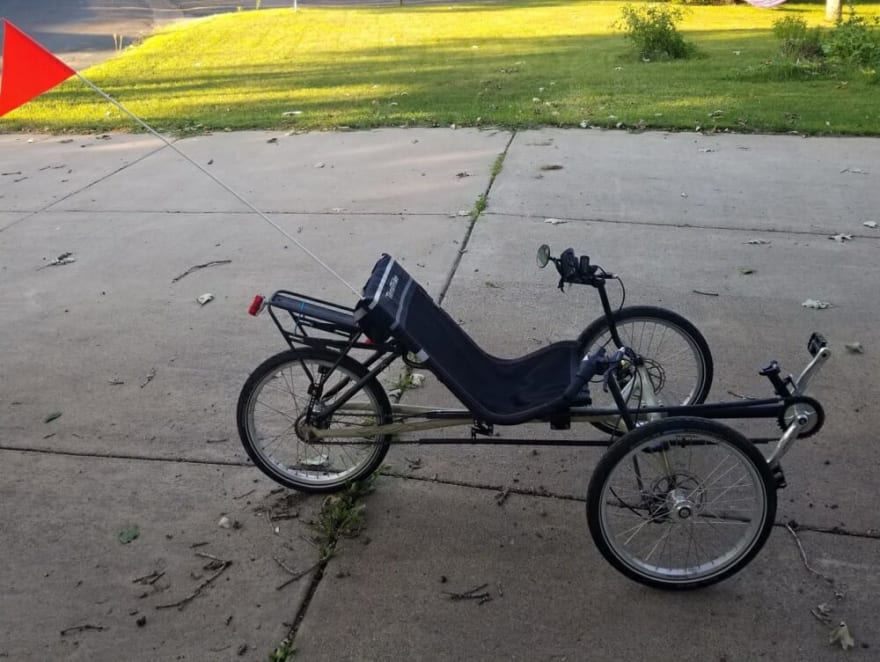 I’ve been toying with the idea of a recumbent for a while now, and wavering between two and three wheels, but the trike seemed like it would be more fun. The problem is my brain, and the stories it tells.

All of those can be interrogated or debunked, but it got me thinking. What if… WHAT IF it doesn’t matter if I’m disabled enough. The body I have does not work well with a conventional bike to achieve my goals. So change the tool. It is probably still a satisfying accomplishment to propel yourself 100 miles, even if it doesn’t hurt as much.

And then you have to start wondering… why do I assume that exercise should be hard? That something “counts more” if I do it the hard or painful way? Physical therapy is all about restoring my function for whatever it is I want to do, but not always the way I used to do it, because sometimes the way I used to do things was hurting me.

AND THEN I thought about all the ways I subtly punish myself for not being neurotypical, or for being big, or somehow imperfect. Like if I feel like a typo was stupid, I will make myself backspace all the way back to it and fix it and retype all the intervening stuff, instead of just accepting the spellchecker suggestion. WHAT? What is the point of that? Do I somehow believe that punishment will make me type better? Or do I just have old, old scripts in my head about it?

I’m friends with someone deeply into positive dog training, and it’s influenced my thinking about corporate life so much that I gave a conference talk on it. It’s life-changing to think about encouraging desirable behaviors instead of punishing bad ones. Why don’t I feel that way about my own behaviors? Guilt and shame are the sticks I beat myself with all the time.

So this is a small start to working on what I tell myself. Maybe I don’t need to get to an impossible place before I change something, maybe I just need to love “the soft animal of my body”.

By the way, the trike previously belonged to an 80+ year old Lutheran pastor who died this spring. His daughter, who sold it to me, says that if I have any extra-amazing riding on it, I should thank Dave.

I had also written all this stuff about why you should believe that I am a responsible person who takes care of their body, and sure I’m fat, but I’m hella strong, and all that.

You know what? That stuff is not the point. You don’t have to respect my fitness at all. I have to get along with my body the best way I can, the way that works for me. That’s all I owe.

Plus this thing is just hella fun to ride. Remember go-karts? It feels like that.

5 Practical Activities for Exercising Your Patience

Challenger Approaching: I am joining the DEV team!

Heidi Waterhouse
Heidi is a developer advocate at LaunchDarkly. She is passionate about clear communication, humane workplaces, and conference speaking. In her spare time, she sews dresses with pockets.
When you stare into the blank page, it stares back at you
#docsfordevs #personal #writing #book
In which I am cranky about the urban/rural divide
#bestpractices #industry #life #personal
Lady Conference Speaker: Home Studio Edition
#devadvocacy #ladyconferencespeake #personal #speakerresource

Thanks for keeping DEV Community safe. Here is what you can do to flag wiredferret: