It has taken me a long time to write this. Partially because I kept iterating on it, and partially because sometimes thinking about delivering conference talks from home makes me cry. Change is hard. In the Before-Times, I had a talk I gave about my backpack, and all the things I carried, and which cables were in my go-bag (3 meter, lightning, USB-micro, USB-C). And all of that expertise and all of my hard-won apparent poise on the stage are beside the point.

I was watching my devrel buddies level up (shoutout to Jérôme Petazzoni and Jason Yee especially), and then I looked at what I had scheduled to do in May. DevOps Enterprise Summit. Microsoft Build. In1ghts. Gartner. A webinar series. Internal training. External chalk talks. Nature, or at least the conference circuit, is healing.

So I asked for budget, and got it. And although it feels like a lot of money in real people money, in corporate money, it is still a percentage of what we would have spent to go to even one conference. And I’m excited about it! It‘s pretty cool to get to hack together new toys! And I have some v. 3 ideas that I’m all :philosoraptor: about.

I’m including links to the things that I am actually using, not because you should buy that exact thing, but because when I was researching, I was frustrated by not having that information.

There are so many things that I learned that it’s obvious I should have been writing these posts all along, but here we go. 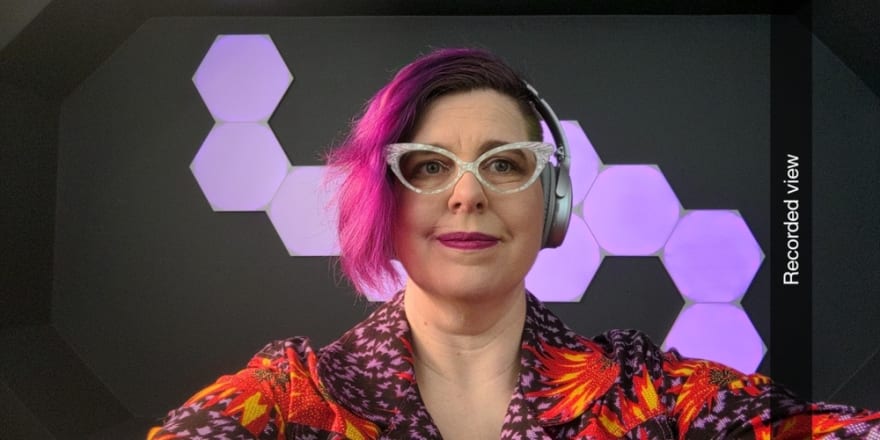 This is the setup for when you don’t have the company credit card or permission to use it, but still want to look and sound good on your meetings.

The whys and wherefores

Wifi is just more flaky and lossy than wired. This doesn’t matter much on your internal zoom meetings, but does end up mattering a lot for real-time talks, recordings, and especially the scenario where you are streaming-to-remote-recording (avoid this, seriously). However, if you are like me, and have a MacBook, there isn’t an ethernet jack. You can get a hub. I’ve been using this Anker hubfor a couple years. (non-affiliate links, don’t get me started on that).

You’re going to need those extra ports, because I want you to plug two peripherals in. Get an external webcam. I use a Logitech c920, which is fine, especially if you also actually have driver software. It’s not bad on a PC, but on a Mac, it’s like a potato of stupidity without the Webcam Settings app to adjust the white balance, gain, etc (none of which you need to understand, just fiddle with the sliders until you look ok). I have mine mounted on what I can only describe as a selfie clamp, which means it’s not resting directly on my monitor and also that I get a little ring light, which helps worlds to make you look better. Yes, it is annoying to look into a light all the time. It’s for people to see me, so I deal.

The other one is a lav(olier) mic. Is is ASMR-level sound? No. Is it like a million times better than your laptop’s mic? Yes. (Unless you’re on a Microsoft Surface — those are freakishly good). You don’t have to spend a lot to get a significant sound improvement. I use this set. You’ll also need an adapter, probably.

Almost done! This last part is fun. Those background-blurring and fake-greenscreen (and real greenscreen) settings on your conference software are cool, but a) they don’t always work when you’re doing recording b) They do not understand interesting hair, or hand gestures. Thus they are dead to me. But I still don’t want to clean or repaint, so what to do? Buy a physical backdrop! I have one that is branded with my company name, but also a couple that I just enjoy. My “internal meetings” backdrop is this colorful brick background. Cheap and easy! If you don’t have a wall to thumbtack it to, you can get a curtain rod and some safety pins, or, you know, get elaborate with backdrop stands. But you don’t have to!

With a little can-do, you can manage all this for a couple hundred dollars. It’s not cheap, exactly, but it really elevates what you present.

Stand back, I’m a professional!

The whys and wherefores of all of that

I keep getting stalled on writing out allll of the reasons and making all the links, and I want to get this posted, so let me abbreviate.

Sound – The Shure mic is a radio standard (and was evidently used to record the vocals for Thriller. Ok.) The Cloudlifter makes it so that you don’t need to turn the gain (think volume, but as input) up so high on the pre-amp, which is the Scarlett. The pre-amp makes the sound into magical digital pellets your laptop can figure out. I think. Honestly, I just bought what industry pros recommended, and I think it sounds pretty awesome — which is to say, I never think about how weird it sounds.

Video – I’m comfortable with Canon – I’ve been shooting it since high school, so it was a natural pick for me to go with this one. It is a DSLR in picture mode, and mirrorless in video mode. This does not actually matter. What does matter is that it’s a camcorder with the ability to change lenses. I have it hooked to an Elgato Cam Card, which lets it act like a very big, smart webcam and stream directly to my computer. The dummy battery powers it so I don’t have to stop and change batteries all the time. Fiddling with the settings wasn’t too hard, and YouTube is a big help. It’s mounted on a teleprompter rig on a tripod. This is an angled mirror, a platform, a blackout bag, and some other stuff that one could DIY, but I chose not to. Setting up the teleprompter with the camera part was easy, getting the stuff I wanted to show was not. My ipad worked, but even with Sidecar and Aircast, it was a pain to set up the mirror flip every time, and I couldn’t easily control what was happening on the screen I was looking at. I ordered a monitor. It was too big for the tripod and also didn’t want to mirror flip. I ordered a different monitor and found some mirror-flipping software that worked, but it only works on non-M1 MacBooks.

Lights – I was able to get rid of several of the lights I had at one point, but you still need to put more light in your face than we normally find comfortable. Remember, when you are setting up, that distance is a square, so if you can get it closer, it will be brighter. Some people have fancy controls for their lights, but this is the part I was cheap about. I have a powerstrip on the floor, and once I flip that switch, it’s just the way I set it up last time.

Software – Descript is my most favorite-est software since Airtable. It is very lightweight input and editing, and it has a really reasonably smart (for north american accents) automated voice transcription. Once you’ve fed it audio, you can edit the recording by clicking in the transcription to jump to a place. You can also add additional tracks. Webcam Settings serves to make the webcam configurable, as if it had Mac drivers. I don’t need it with the CamLink, though.

Like all good user stories, it turns out that what I thought I wanted and what I actually want are not quite aligned, and furthermore, there are use cases I hadn’t considered. For example, I originally optimized for seeing my slides in the teleprompter and advancing using my usual Bluetooth slide clicker, but it turns out that it uses the same frequency as my nifty lights, so that needed some refinement.

Also, although the teleprompter-and-remote setup works well for giving a standard talk, it’s terrible for doing an interview or a Q&A, where I want to both look at the person I’m talking to and a screen full of questions or audience comments, and I don’t have a way to toggle between those. I ended up building a lectern-type thing that lets me set my laptop in front of me.

I also want to set up a second filming area so that I can do asides, which sounds easy, but is actually kind of complicated.

This is, at least partially, the writeup I wished for when I started recording, but it’s also a work in progress. I am pretty happy with it for now, but I also think that for professional conference speakers, it’s going to become more standard to have some kind of “studio” setup, the way we got used to having a speaking go-bag.

How to Terraform multiple security group with varying configuration

Today I intentionally copied a bug

Heidi Waterhouse
Heidi is a developer advocate at LaunchDarkly. She is passionate about clear communication, humane workplaces, and conference speaking. In her spare time, she sews dresses with pockets.
When you stare into the blank page, it stares back at you
#docsfordevs #personal #writing #book
In which I am cranky about the urban/rural divide
#bestpractices #industry #life #personal
Semantic meaning is everywhere
#devadvocacy #ladyconferencespeake #speakerresource #speaking

Thanks for keeping DEV Community 👩‍💻👨‍💻 safe. Here is what you can do to flag wiredferret: