Why I Chose Rust

Rust is a popular topic of discussion when it comes to performance and modular design, but that is not why I chose this language. I chose Rust because I wanted a cross-platform system programming language.

After digging through Rust for a few weeks, I discovered some of most dreaded features turned out enjoyable. Albeit there is a learning curve, but in hindsight, I really appreciate the following features of Rust.

My Goals for Exploring Rust

My goal is to find a language which allows me to write cross platform code without needing to jump through a bunch of hoops. As a hobbyist, I don't have a lot of time to pick up new languages or dig through the framework of the week.

To deem my exploration a success, I will continue Rust development until I publish an app on the App Store. Why? Because Swift/Obj-C are my most dreaded languages, but I can tolerate Java. So if Rust allows me to at least cut out Swift/Obj-C then I will be happy.

Going into this project, I know that I will frequently modify environment variables and build scripts. So before I even start with Rust, I will add a script to my .bashrc which makes it easy to swap out large changes to my dev environment.

The following script allows me to extend my .bashrc from any project directory in my ~/code folder by traversing upward until it finds a folder called .devenv. From there I can source a per-project bash script.

Here is the part where I use the method to source the local .bashrc. I have to re-source my environment every time I switch projects, but that is not a concern.

Now that my machine can handle per-project bash environments, I setup a few commands so I could quickly jump around my code.

When I first started exploring weeks ago, I wanted to start at the lowest level possible. I wanted to write my own graphics render, and game engine. However, after about 3 days of zero progress, I gave up that dream and looked for a Rust game engine.

Of course, I downloaded the first game engine I could find. Which turned out to be a pretty nice framework. Bevy is a game engine which is designed around apps which should be highly modular. I have used the library for a few weeks, I love it still!

Notice how I am not directly calling println. This is because Bevy provides a framework which is very similar to the routing system in ExpressJS. On bigger projects you can extract capabilities in modules/plugins and each plugin has access to the context for registering more systems.

Where is the GUI?

Bevy isolated all of its components into plugins so if you want to ditch the whole "game engine" thing you are free to do so! You can also run Bevy in headless mode! Although for the sake of this tutorial, you'll want to enable the default plugins.

I want to immediately try to compile hello world for iOS. This saves me a lot of time upfront because if I can't get iOS to work with Rust then the project is a failure. Plus nothing is more difficult than writing a project then trying to port it to another system after the fact.

It took me much longer than I care to admit to successfully compile. Originally, I thought I needed to create a header bridge using extern "C", but that is not the case. In fact you do not even need to touch XCode!

There is a build tool for cargo which let's you compile and bundle for iOS without jumping through any hoops. First install the build tool:

Then you need to list out all the possible build targets that Rust supports. Since I am targeting iOS, I ran the following command:

If you are missing iOS as a target, then you need to add them based on your environment.

Once you have the compilation targets available on your System and you are on a Mac, you can use the script I wrote or copy and paste the following commands to inject your app into the simulator. Most of the commands come with XCode.

The script below uses dasel so it can query the name and bundle identifier from the projects Cargo.toml file.

Then I use a series of commands provided by XCode to work with the iPhone simulator. More information about how the commands in this script work can be found using this cheat sheet.

If everything worked correctly, you should be left with an iOS App which spams "Hello Rust" to your terminal and meets the following criteria: 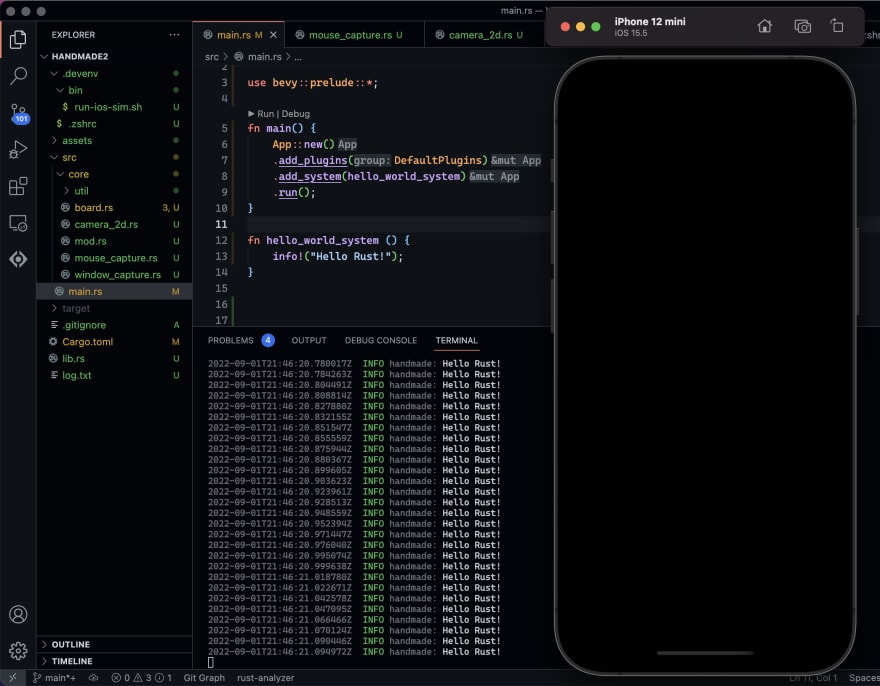 If you would like to document the rest of the project as a series or share the source code please leave a like, comment, or other type of reaction! It helps me stay motivated

It is possible to write a game entirely in Rust and compile to iOS natively without XCode.

Once suspended, wadecodez will not be able to comment or publish posts until their suspension is removed.

Once unsuspended, wadecodez will be able to comment and publish posts again.

Once unpublished, all posts by wadecodez will become hidden and only accessible to themselves.

If wadecodez is not suspended, they can still re-publish their posts from their dashboard.

Once unpublished, this post will become invisible to the public and only accessible to Wade Zimmerman.

Thanks for keeping DEV Community 👩‍💻👨‍💻 safe. Here is what you can do to flag wadecodez:

Unflagging wadecodez will restore default visibility to their posts.