To comply with the software life cycle, some methodologies that guarantee success have been studied and implemented. These methodologies can be classified into traditionals (seen in the previous post: https://bit.ly/2Vfutgb ) and agile.

As we could see, in the traditional ones, it is not possible to go from one stage of the life cycle before completing the previous one.

In the agile methodology, rapid and effective development is required, where the requirements and stages of implementation can be done simultaneously.

They are those that allow adapting the way of working to the conditions of the project, achieving flexibility and immediacy in the response to mold the project and its development to the specific circumstances of the environment.

Within these methodologies we find: 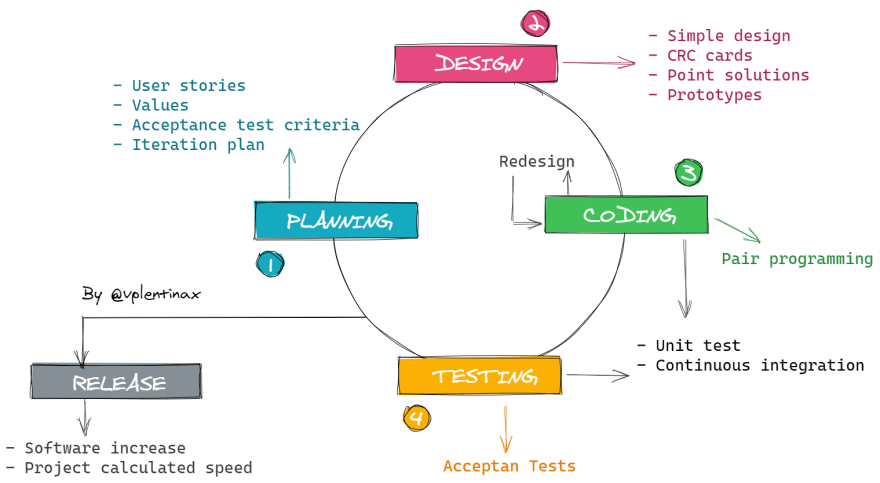 Let's see the advantages and disadvantages:

It is an incremental and iterative methodology. A cross-functional team is intended participate to carry out the project in such a way that the different activities to be carried out overlap much. Accepting that the problem cannot be understood completely from the beginning, the team tries
be able to deliver a functional version of the software at the end of each sprint and go thus responding to the changes that occur.

The main roles in Scrum are:

Work planning is done on what is known like Sprint, whose duration is recommended to be always the same. We can set sprints of one week, fifteen days or, at most, one month.

The goal of daily meetings is for the team to present the progress made and the results obtained, as well as to justify why certain tasks have not been completed. Plan the next day's development process and come up with ideas.

Let's see the advantages and disadvantages:

In these two publications, I have reviewed both traditional and modern teamwork methodologies. Knowing how to choose the right one for our team will be much easier now. I hope you can take advantage of this knowledge.

A Guide to writing to better comments

How I Use Obsidian As A Creative - Part 4