Mike: I made some changes in my source code and my application broke. Now, I can’t undo the changes that I made earlier.

VT: You should have used git.

Mike: Git? What is that?

VT: Git is a version control system, which tracks the history of changes. As you make changes to the project, any earlier version of the project can be recovered at any time.

Mike: This sounds great! But, how can I use it?

VT: First, download git from http://git-scm.com and install it on your computer.

VT: Configure user information for git. This helps to set your details to all your commits.

Open a terminal (or command prompt) and run the following commands:

Make sure to replace [name] and [email address] with your real name and email address respectively.

Mike: But what is a git repository?

VT: A Git repository is the .git/ folder inside a project. This repository tracks all changes made to files in your project and builds a history over time.

VT: First, you have to initialize a git repository.

Open a terminal (or command prompt) in an empty folder (or in your project folder) and run this command:

If you are not seeing the .git/ folder, turn on the Show Hidden Files option. Usually, it is turned on with Ctrl+H.

VT: That's it. Now you have a git repository where all the changes that you make will be tracked by git.

VT: Make a new file (or change the existing one, if any) in the folder where you initialized the git repository. 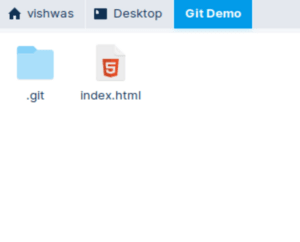 VT: Now, you can run this command to see your changes tracked by git.

Mike: Done! But what are branch master and commits mentioned in the output?

VT: Hold on! We will talk about branches in a moment. Let's first talk about commits.

Let's see how we can commit our changes to the git repository.

VT: First, we have to add our change to the "staging area".

Mike: What is the "staging area"?

VT: The staging area is like a rough draft space, it's where we can add a version of a file (or files) that we want to save in our next commit.

VT: Let's add our index.html file to the "staging area".

OR, we can add all the changes to the staging area at once by running this command:

VT: Now, if we run the command git status, we will get an output something like this:

VT: We can commit our stagged changes by running the command:

We can add a message to describe our changes by replacing [descriptive message] in the above command.

VT: We have successfully committed our change. We can see all our commits by running the command:

Mike: That's great! But what if I made a commit by mistake? How would I undo any commit?

VT: We can undo any commit at any time by running the git reset command.

VT: Let's see it in action.

Make a change to the index.html file to make another commit.

Add the following line to the index.html file:

Now, on running the git status command we will get the following output:

VT: Now as we have committed all our changes.

Suppose we made the last commit by mistake and we want to undo that commit.

First, we have to find the hash id of the commit to which we want to go back.

Run the following command to undo the last commit:

Replace [commit_hash_id] with the hash id of the commit to which you want to go back.

VT: We have undone the commit and all the changes are sent back to the unstaged area.

VT: If you want to discard those changes, you can run the following command:

Mike: Great! I got my index.html file restored to the initial state.

Mike: But what are the "branches" that you mentioned earlier?

VT: I think, it's the right time to talk about "branches."

VT: In Git, a branch is a new/separate version of the main repository.

Let's say we have a large project, and we need to work on a new feature.

We can create a new branch (let's say feature) and then we can work on that feature without affecting the main branch.

If we are satisfied with our work, we can merge our branch with the main branch.

If not, then we can return to the main branch and discard the changes we made on the feature branch.

Mike: I am getting it, but I want to see it in action.

Suppose we want to add an image to our index.html.

Create a new branch with the name image by running the following command:

We can list all the branches by running the following command:

It lists all the branches in the current git repository.

Here, the master is the default main branch.

The asterisk * shows which branch we are currently working on.

VT: Now, we can make changes and they will affect only the current branch (image). They will not affect the main branch (master).

Add the following line to index.html:

VT: Our change is committed but it is only in the image branch. It will not affect the master branch.

We can see this by switching the branch to master.

This is because the image was added in the image branch.

Mike: How would I merge both the branches?

VT: If we are satisfied with the changes we made in the separate branch, we can merge that branch with the master branch by running git merge [branch_name].

Then run the following command to merge the branch image to the branch master:

VT: If we no longer want a branch and we want to delete it, we can simply run the git branch -d [branch-name] command.

To delete the branch image in our project:

Mike: Oh, that's a lot for me, but by practicing it a few times, I can make it through.

Git is a free and open source distributed version control system designed to handle everything from small to very large projects with speed and efficiency.

In this article, you learned about git repository, git commits, git branches, and how the whole process of version control works.

I hope you enjoyed the article and learned something new. If you want, you can also follow me on LinkedIn or Twitter.

Cheers and see you in the next one! ✌️

Once suspended, vishwastyagi will not be able to comment or publish posts until their suspension is removed.

Once unsuspended, vishwastyagi will be able to comment and publish posts again.

Once unpublished, all posts by vishwastyagi will become hidden and only accessible to themselves.

If vishwastyagi is not suspended, they can still re-publish their posts from their dashboard.

Once unpublished, this post will become invisible to the public and only accessible to Vishwas Tyagi.

Thanks for keeping DEV Community 👩‍💻👨‍💻 safe. Here is what you can do to flag vishwastyagi:

Unflagging vishwastyagi will restore default visibility to their posts.