The best part about being a developer to me is the ability to create something from nothing (and share it with the world).
Mobile development has been (and still is?) one of the most interesting roads you can take having this thought in mind, which is why I've been working as an Android mobile developer for the past 7 years. In that time, like everything in nature, a lot of things have changed, evolved for the better or dead-ended somewhere on the mount improbable.

One thing that also evolved trough time, understandably so, are the Google Play Console Policies. Sarting off as very inviting and accommodating to becoming very strict, and yet in other parts very vague and open to interpretation.
With the app quantity growth, stricter rules are somewhat a guarantee for app quality a perspective I fully comprehend. Google has decided to enforce this by, in worst case scenario, terminating your developer account (and you as a developer) for good from their app publishing platform. Fair enough.

I may be naive, but I think the vast majority of the developers would rather respect the rules than try to hack em if they know that the punishment for that behaviour is a career change. To top that, from a devs perspective, the main problem regarding publishing apps to Google Play Console is the automated system deciding on your app/account termination (as I said, worst case scenario) and the low probability of being able to contact human being with clarification on why's there a problem with your app submission (and be given a chance to correct it).

It seems that in this system the collateral damage are the developers that unintentionally have broken some of the rules.
This setting makes it especially hard for novice developers to publish "show off"/"practice" apps - not having enough experience (even though you can get banned for totally development unrelated reasons), chances are that you might miss something.
Seasoned Android dev enthusiasts may also be holding off app publishing, regardless if they do this as "side gig" or as a main source of income, a mistake that can result with account termination looks too costly.
Lastly, if there's no balance, this will put (puts?) strain on start ups to pursuit and channelize creative new ideas as an Android app, where this being an end product of the goal to tighten the leash on deceptive agents trying to exploit the users.

r/androiddev on reddit with 143K subscribers is the main go-to place for the global Android community- covering all topics of the android dev lifecycle - from libraries, code, snippets, discussions and self-promotions to Google Play app/account problems (suspension/termination) related posts. I've been active member ever since I've started developing Android and just by daily scrolling through it seems that lately, especially in the last year[*] the amount of these Google Play related ("termination/suspension") posts have risen in numbers.

I want to analyze the relationship between the Google Play Console policies and its changes and the Android developer community. Do that in straightforward fashion: gather the data, put hypothesis in mind to the test, explore the data and see where it'll take me.

The first place I went and the first question I wanted to answer is- are the Google Play Related ("termination/suspension") posts on the rise?
The answer: yes. 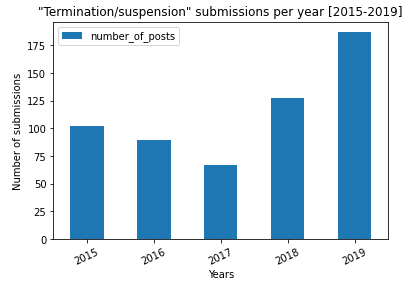 The data shows a decline in these kind of submissions on r/androiddev with the lowest point being 2017 with around 60 and then it start rising to 175 in 2019. With the basic premise proven right, just in terms of quantity I wanted to explore the relationship between Google Play Developer Policy Center updates and r/androiddev submission number fluctuations.

Here is the total amount of updates per year: 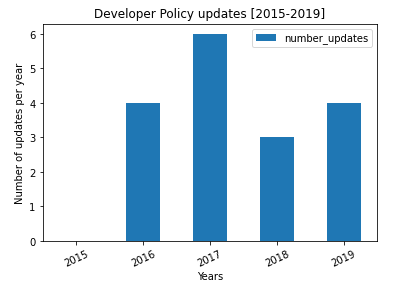 As it can be easily concluded there's no clear link between the number of updates with the spike or number of Google Play "termination/suspension" submissions on r/androiddev - 2017 had 6 changes but least number of subbmisions to the subreddit. What can be further explored is to cross-reference the months when the updates have happened and the number of posts. Here's that dispersion, in which should be noted - the months on x-axis marked in red rectangle have Google Play Developer Policy Center updates (source). 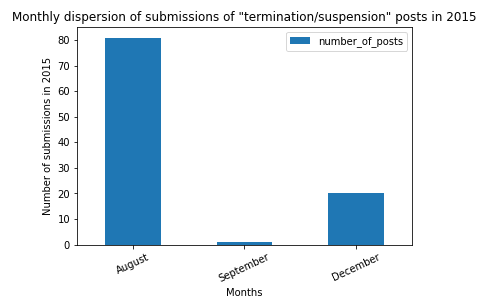 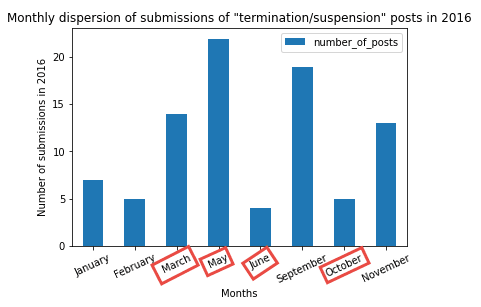 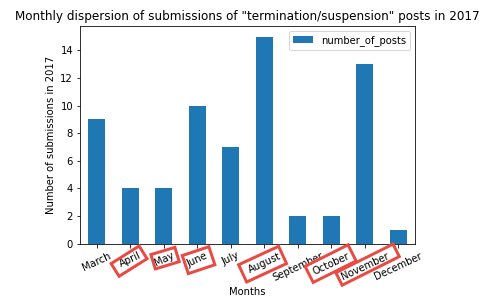 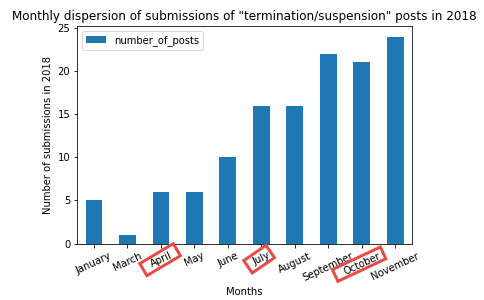 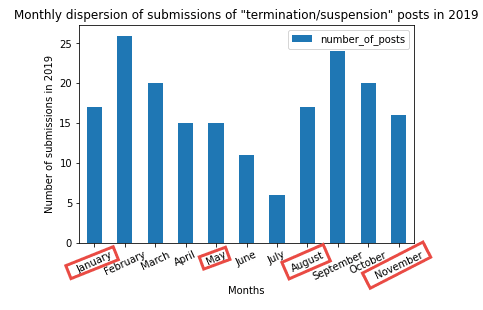 It's noticeable that more posts happen in a month with a policy change or the following period. To determine this further, the nature of the update must be inspected - which changes, theoretically yield more termination/suspension submissions and are they related. For example, in 2017 it can be observed that the biggest spike in submissions is in August. One possible route to pursue is to determine if the submissions are, let's say related to gambling apps, given the policy changes:

However, this will not be point of interest in this research as it requires more resources and time, but is not excluded as a possibility for part 2?

Another engaging matter of the research is to see how the community reacts to these submissions and how it values them - that can be seen trough karma (difference between upvotes and downvotes). Firstly, we get ambiguous results when the total karma is weighted against the karma that Google Play Related ("termination/suspension") posts got: 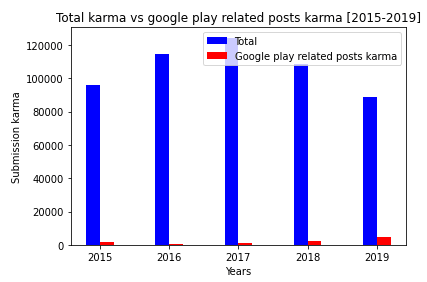 The picture is very different when top 10 submissions sorted by karma are matched against top 10 Google Play Related submissions: 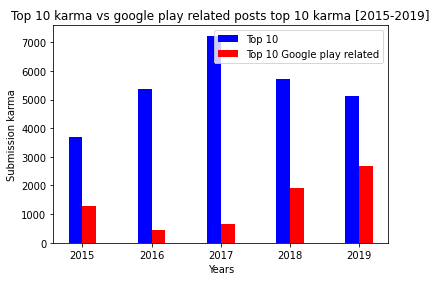 And finally, the percentage of Google Play related submissions in top 10 posts for the given year: 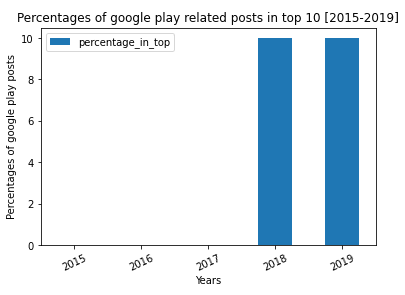 To put it simply, one out of the top 10 submissions on r/androiddev in 2018 and 2019 has some relation to app termination or suspension.

The goal of this article is not to justify breaking of the polices or point fingers, rather than determine the status of the relationship between developers and their app publishing platform. The research is more centered on numbers rather than letters, meaning, the context of the submissions is not part of this research, something that can steer the conclusion in different direction.

What numbers show is that this is valid point for discussion and apparently is something developers experience and want to talk about. Further research should have a goal of determining the rightfulness of these submissions, as well as their resolution - something that looks like it might be hard to measure in automated fashion.

P.S. Let's finish off on a bright note:

Top 5 posts of r/androiddev per year

Once suspended, viksaaskool will not be able to comment or publish posts until their suspension is removed.

Once unsuspended, viksaaskool will be able to comment and publish posts again.

Once unpublished, all posts by viksaaskool will become hidden and only accessible to themselves.

If viksaaskool is not suspended, they can still re-publish their posts from their dashboard.

Once unpublished, this post will become invisible to the public and only accessible to ViksaaSkool .

Thanks for keeping DEV Community safe. Here is what you can do to flag viksaaskool:

Unflagging viksaaskool will restore default visibility to their posts.