When dealing with conccurency problem, it is harder to reason about when moving down the stack of abstraction (machine, process, thread, hardware components, etc). Most programming languages use thread as its highest level of abstraction. Fortunately, Go build on top of that & introduce Goroutine.

“Share memory by communicating, don’t communicate by sharing memory.” - One of Go’s mottos

Although Golang provides traditional locking mechanism in sync package, its philosophy prefers “share memory by communicating”. Therefore, Golang introduces channel as the medium for Goroutines to communicate with each other. 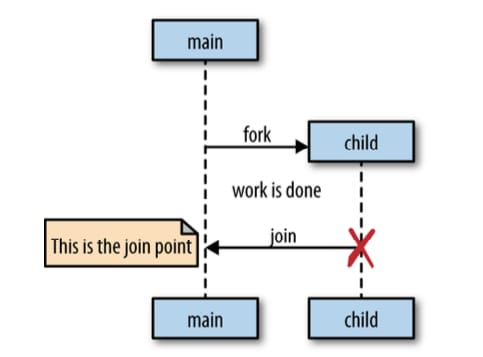 This concurrency model is used in Golang. At anytime; a child Goroutine can be fork to do concurrent work with its parent & then will join back **at some point.

Every Go program has a main Goroutine. The main one can be exit earlier than its children; as a result, a join point is needed to make sure children Goroutine has chance to finish.

Default capacity of a channel is 0 (unbuffered channel). Reading from empty or writing to full channel is blocking.

if a buffered channel is empty and has a receiver, the buffer will be bypassed and the value will be passed directly from the sender to the receiver.

When a Goroutine read from or write to a channel, various of behaviours might happen depending on channel state.

Below table summarizes all the behaviour:

As the behaviour is clomplex, we should have a way to make a robust and scalable program.

Concurrency in Go: Tools and Techniques for Developers - Book by Katherine Cox-Buday

Once suspended, vietmle_ will not be able to comment or publish posts until their suspension is removed.

Once unsuspended, vietmle_ will be able to comment and publish posts again.

Once unpublished, all posts by vietmle_ will become hidden and only accessible to themselves.

If vietmle_ is not suspended, they can still re-publish their posts from their dashboard.

Once unpublished, this post will become invisible to the public and only accessible to Viet Le.

Thanks for keeping DEV Community safe. Here is what you can do to flag vietmle_:

Unflagging vietmle_ will restore default visibility to their posts.