Imagine being in a manor where no one tells the truth unless you are in the dead center of it. Here in Hollow, you must play as different characters to unlock what’s actually going on rather than what you’re told is going on. Starting as a child in the manor, you have a strict curfew to avoid the lurking shadowy monsters — do these monsters even exist? While investigating different rooms your character may die, however, this will bring you one step closer to the truth as you revive as a different character from the manor. This being said, you will no longer be a tiptoeing child restricted in your own room but rather you may have some authority in the house…die and you shall see!

As players go through different characters in the game, they will discover that with every new character, there is a new room. Since this is a point-and-click game, to navigate around rooms and hallways, you must use your mouse and only your mouse. You may also reveal pop-ups by clicking on items, this helps players understand their environment, character, and relationship with other characters in the manor. 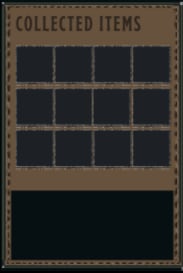 Some interactable components of the game will give players an item that can be examined in the inventory on the top right. These items may be used to unlock hidden doors, create distractions, or kept as contextual clues.

Here I will show you the initial mock-ups and profiles of the characters in Hollow. Think of it as a short gallery! 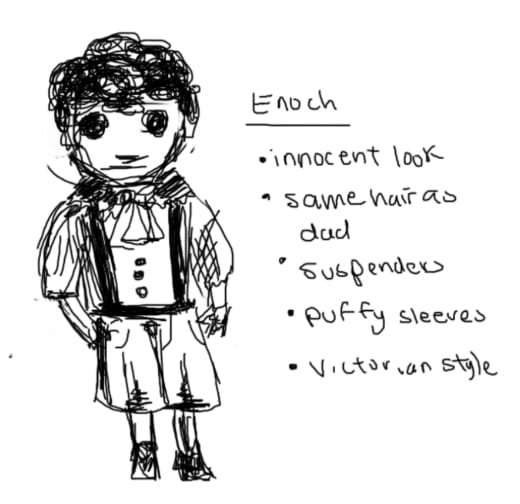 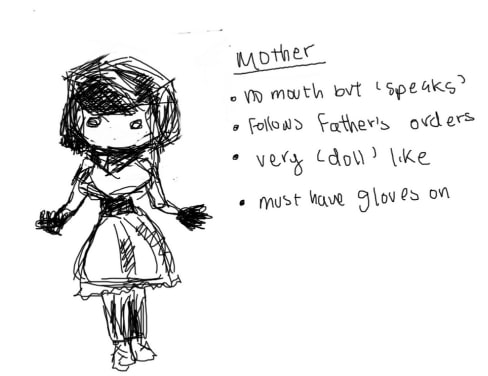 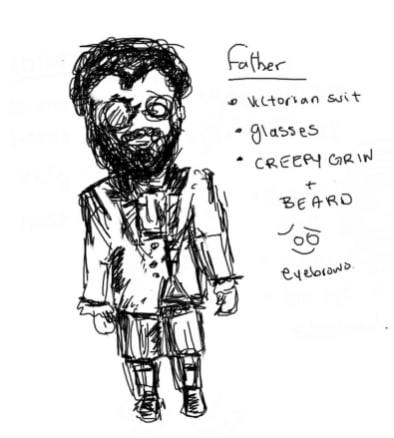 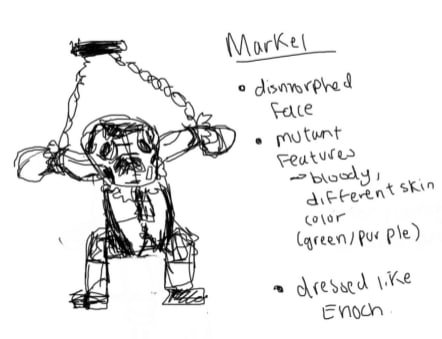 A major job I had other than the narrative design would be modeling the rooms of each character so that it would fit the aesthetic, support the mechanics and ultimately tell you a bit about each character.

The game engine we used was Godot and I would say it was pretty friendly for someone who has never used it before. It may also be a bit bias because I had an awesome teammate give me a little “live tutorial.”

NOTE: these pictures are from behind the scenes so not in-game photos

Here we will look at my two favorite rooms.

A Deeper Look At The Narrative:

Now that you got to know about the players and the setting, I think it’s the perfect time to talk more about the story.

When the player experiences the game through the lens of Enoch, Mother, and Father, the picture-perfect family starts to fade away. Playing as Enoch, the player will see that Father is loving, Mother is sweet, and the reason why he has to go to bed at 10 PM is because of monsters.

However, as the story progresses and the player realizes that the family of three was actually a family of four, questions start to erupt and doubts start to form. Luckily, in the role of Father, everything will start to piece together…the player will have to pick up chunks of flesh in the hallway and discover a hidden basement. Then, what was once perceived as a monster is soon revealed to be the brother of Enoch.

The player will learn all about the death and resurrection of Enoch’s brother Markel and they will see how Markel is now a **mutated being **who resembles a monster more than a human. At the end of the game, the prompt, “DAY IS ENDING, would you like to give Markel his needle to keep him alive?” will appear. If the player chooses ‘no,’ the screen will turn black with a pop-up saying: “Markel: FATHER I THOUGHT YOU LOVED ME… WHY DID YOU KILL ME?” This is the moment when the player realizes why Father was so crazy. Markel’s spirit still wanted to stay alive even as a monster and Father was trying to satisfy his son’s wishes — even at the expense of others. Contrary, if the player chooses ‘yes’ and gives Markel the needle, the pop-up will say, “Markel: I love you Father, thank you.” This is so that the player could reach the same conclusion with either choice.

This game was made in a team of seven and the time spent working on the game was a whopping ten days! For a majority of our team, it was our first time using Godot so we didn’t quite finish the game but we completed one room and a hallway transition.

I would also like to give credit to my amazing team members:

**Note: you can play the prototype here: https://vsmiles.itch.io/hollow

This game will be completed, but until then I’ll be signing off!