And that reason is the growing needs for the advanced infrastructure. Earlier, the servers of applications used to be less efficient when compared to today's. That is because the infrastructure today is distributed and processors are multi-core and multi-threaded. We need to take full advantage of these advanced features to make our applications more efficient.

What does distributed system and multi-core architecture do?

This is how the modern applications can leverage the present infrastructure and architecture for high performance.

But there is one problem that can be faced using distributed architecture. Consider this situation. You shared a file in our application to another user with write permissions. It can be a problem if that user tries to delete a file when you are trying to edit that file. It can be an ambiguous situation. An ideal situation should be that application should only let one user either to delete or edit the file at a time.

This can be achieved through concurrency. Not all programming languages support concurrency by default. But, Go supports concurrency out of the box.

Ok, that's it for the basic stuff. Let's dive into the interesting stuff. For that we need two things. A code editor and Go language in our machine.

Link to install VScode - Go to this link and you will see something like this. 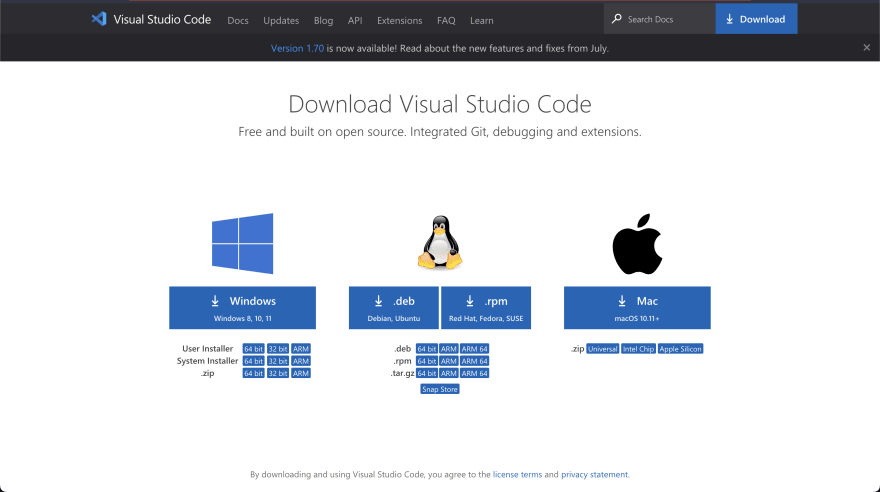 Choose according to your operating system and install. Installation should be straight forward.

Link to install Go - Go to this link and select your operating system to install. 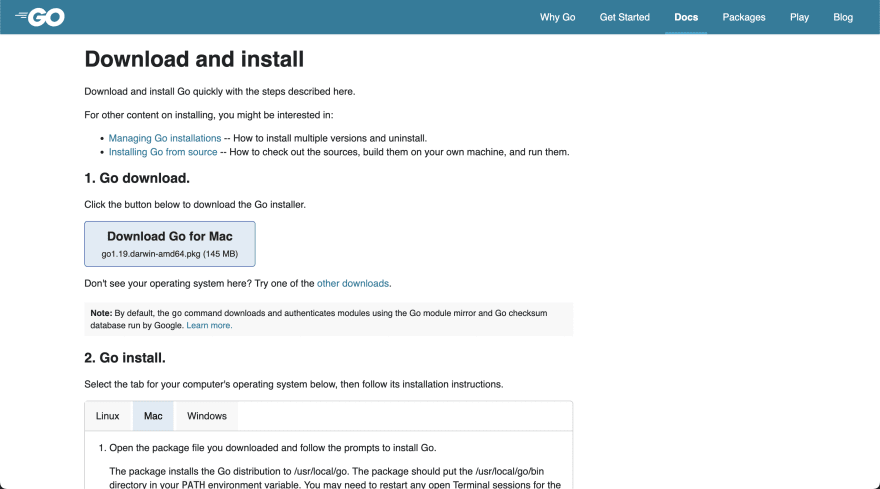 To check successful installation, open terminal / command prompt and type go and press Enter. If you can see something like this, it means Go installed successfully. 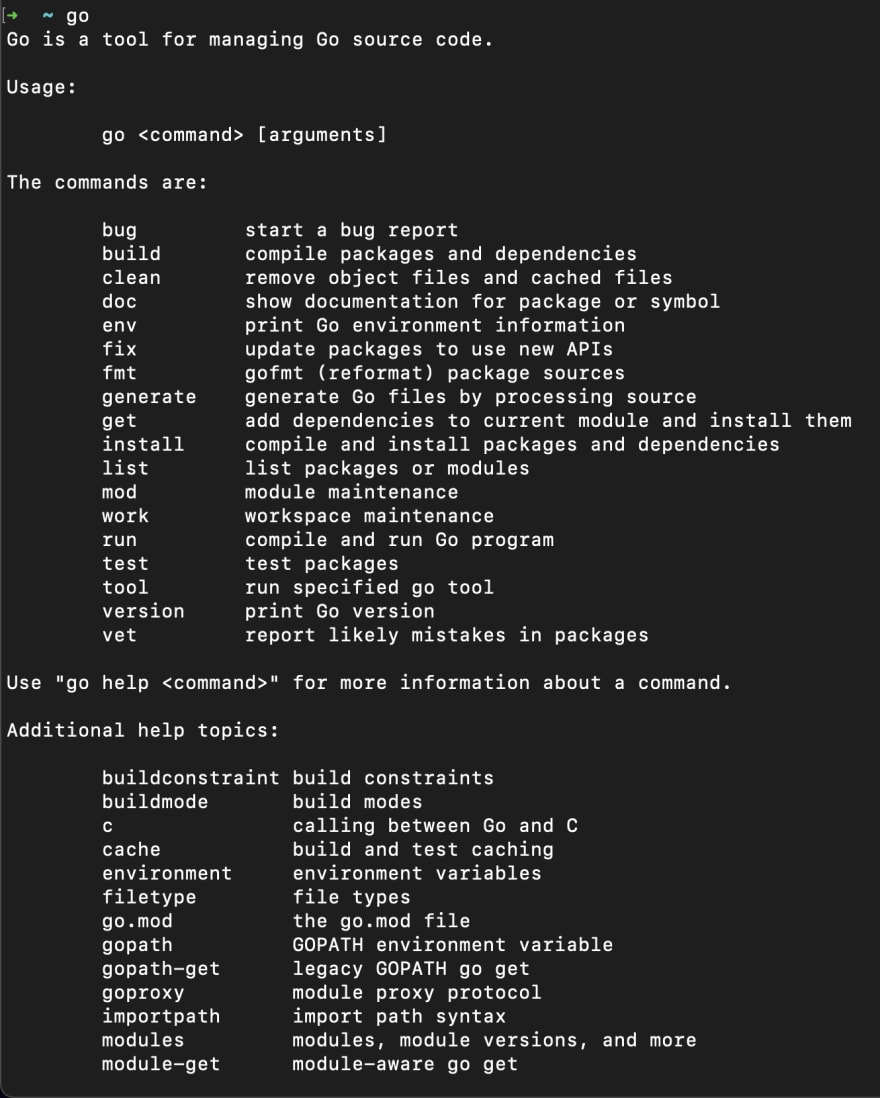 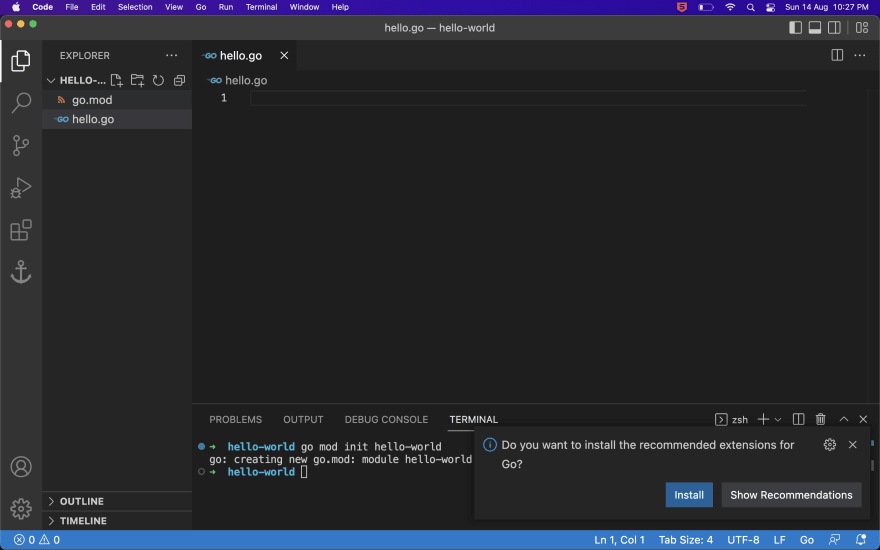 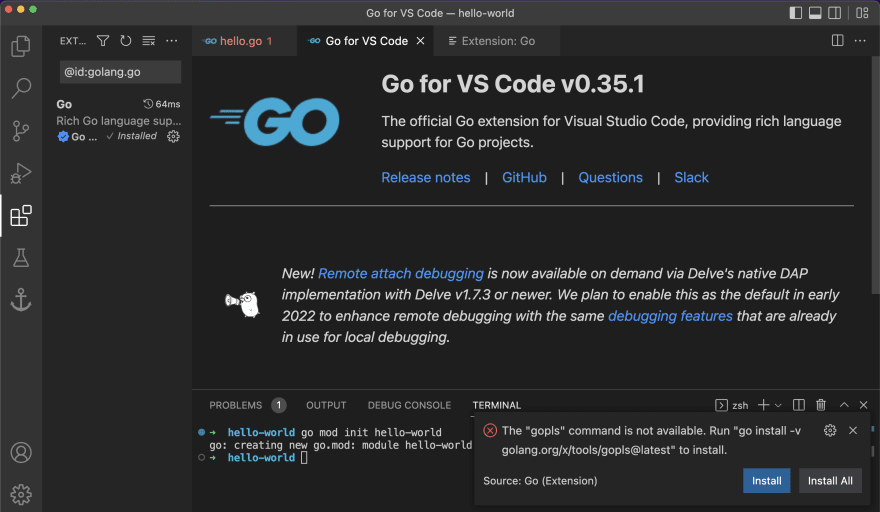 Coming to the code

To simply put, a function is an isolated block of code which performs a certain task. A function doesn't interact with other parts of program unless we specify it to.

There are 3 parts of a function. They are:

It starts with a keyword func in go. And a keyword is a specific word which is reserved for a specific purpose and we can't use them for any other purposes. Function header also contains the name of the function with which we want to uniquely identify and call it. The syntax will be like func <function name>

Function arguments are wrapped inside a pair of parenthesis (). We use arguments to pass data to a function. Remember from the upper part where we discussed that a function is isolated from other parts of program. So, we use these function arguments as a medium to pass data in order to perform required task. There can be any number of arguments for a single function depending upon the task and requirements of that task. Let's say we have a function which performs addition of two numbers which a user gives in run time. Since they come in run time, we can't hardcode them inside function. The only way is to take input from user while running application and pass those inputs to a function which performs addition. And we pass those inputs to that function using its arguments. So, in this case, our addition function requires two arguments. The arguments syntax look like (<arg 1>, <arg 2>, ...)

This is the place where we write actual logic to the task it is specified to do. In above addition example, we want our function to add two given numbers. Hence, the core logic of the function goes inside the body. The body of a function is wrapped inside curly braces { }.

Let's combine everything and write the syntax of entire function.

So, the main function in hello world program is going to look like:

Hey, here are two lines those we haven't discussed about.

The line 1 - This is a mandatory line for every program which depicts the package to which the current program belongs to. The name can be anything. I just gave main. You can give whatever you want. Any package name doesn't make any difference here but when we work on huge projects, the package names do matter. Just keep that in mind.

So, just give whatever you want to print inside that Print function wrapped in " ".

After writing program, save it.

As we talked before, Go is a compiled language, which means that we have to compile which gives an executable file and then run it. We can do that.

But we can also just directly run it and see the output using the command go run <file name>. In our case, it is go run main.go.

If you ran same code as above, you should be getting output like this in your terminal.

That's it for this one. More on Go lang will be coming soon and do follow me to see them. Make sure you like and share if you felt this good.

Here to learn, Network and become a better Developer/DevOps Engineer!!!

Once suspended, vchiranjeeviak will not be able to comment or publish posts until their suspension is removed.

Once unsuspended, vchiranjeeviak will be able to comment and publish posts again.

Once unpublished, all posts by vchiranjeeviak will become hidden and only accessible to themselves.

If vchiranjeeviak is not suspended, they can still re-publish their posts from their dashboard.

Once unpublished, this post will become invisible to the public and only accessible to Chiranjeevi Tirunagari.

Thanks for keeping DEV Community 👩‍💻👨‍💻 safe. Here is what you can do to flag vchiranjeeviak:

Unflagging vchiranjeeviak will restore default visibility to their posts.