This article was originally posted in my website. If you like it, you may find interesting previous articles in my blog

After doing a lot of APIs and microservices lately, I've been trying to find new ideas for quick demos to improve my skills. In one of the projects I'm working on, I'm planning to include a feed that is refreshed with the activity of the users in real time. I wasn's sure about how to do it and, at first I thought about using RabbitMQ, but after a quick search I found WebSockets and Socket.io. If you want to learnt what WebSockets are, watch this super quick video to understand the basic concepts.

Instead of builing directly the user's feed for my project, I decided to build a quick chat demo first. There are multiple articles and videos that explain how to create a chat with socket.io but most of them don't explain exactly how all involved parts work together or are just a small demo to run locally but is not "deployable" to production. So I took all those examples as references to build my chat, took notes of everything that wasnt clear for me and built it in a way so it can be deployed to a server (even created a Docker image!). Here are all my notes.

Our chat app server will have following responsabilities:

When a user connects to our server from his browser, he'll receive the HTML/CSS/JS client files which will:

First thing is to start our Node.js project with "npm init" as we'd have to install dependencies later. We can use Node's http module to create a static server that sends our client any type of files, in our case it would be html, css and js. I found this example in the Mozilla docs which was exactly what I was looking for. No framework, just an http server able to send html, css, js, images and more. They also explain how it works line by line so I'll not go into that. I put the server code in a file named server.js. The only things I changed from the Mozilla example are the port number and the path were it reads the files from, as I'll use a folder named "client":


Next step was to install the socket.io dependency with "npm i socket.io" include it in our server.js file and log something when we detect a connection:

I've also included how to capture an event called 'new-connection', which for now, will just print something in the console. Now let's move to the client.

As mentioned earlier, I placed all our client files (html, css and js) in a folder named client. The index.html file is pretty simple:

You can find the code of the index.html file in this GitHub Gist or directly in the repo.

At this point, if I start the server using 'node server.js' and open the browser I get the prompt and after entering the name, I'll be connected to the socket server and see something like this in the server console:

Up to this point, I was able to:

The only things missing to complete the chat application were:

Adding the messages we send to the chat-container div is something we can do in the client script.js file. We just need to add an event listener to capture when the form is submitted and, whenever that happens, create a new div containing the message inside the chat-container. As this is something I'll have to do also when we receive messages from other users, I created a function called addMessage(data, type) which I can call multiple times. In addition, I trigger an event called 'new-message' sending to the server an object with both the message and the client's socket id.

Note that I also added different styles to the messages depending if they belong to the user or if they are received from others.

Next step is to handle the 'new-connection' and 'new-message' events properly in our server.js. In the 'new-connection' event I stored the client's socket id and the user name as key:values of an object named users. Then in the 'new-message' event, I used the socket id received to find the correspondent user name, and with the broadcast() function, send the message information to all clients connected except the one that emitted the event originally.

With these last few bits done, I had a fully functional chat application and I could test it by opening multiple browsers locally: 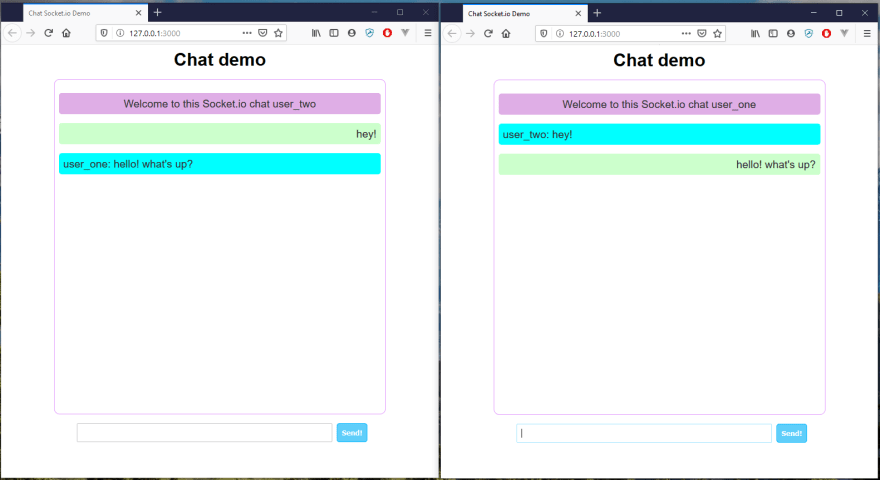 The only thing I havent covered up until now is the styling (which you can find in the style.css file) and minor validations, like making sure users cannot send empty messages. You can find the full code in this repo in GitHub. It also contains a Dockerfile so you can build an image and deploy it anywhere with Docker 🙃 or if you just want to try it online, visit this link.

For this app I just needed to use the emit() and broadcast() functions but Socket.io contains a lot more functionalities like assign namespaces to sockets so they have different endpoints, create rooms and even integrate it with Redis. You can find examples of all those in the docs.

Hope this helps you understand WebSockets and how Socket.io works.

Intro To Using Pinia For State Management In VueJS