Hello there!
Last time I wrote about using Avalonia and Avalonia.FuncUI to write a simple todo app, you can check that here: 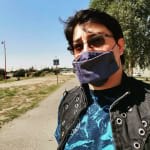 Desktop Apps with Avalonia and FSharp

this time we'll do something similarly simple...

I've always believed anything in my desktop is way more complicated of what I feel I'm capable of (the same goes for the libraries I use) but I felt this time I was ready to at least try and if I failed I would have learned something new for sure and if not... Let's go for it!

First, I set some goals what do I want this thing to do?

Of course in my mind, I had waaaaaay more objectives... I was having a brainstorm sickness I was already building a startup from it... but I came back to earth and settled on those three realistic goals, If I ever continued with that I would have already a solid foundation to grow those ideas up.

Second, What do I need to play music?
I needed a solution that worked in Windows, MacOS, and Ubuntu and if I'm telling everyone that Avalonia is cross-platform I can't expect everyone to have to write native code for that... so I went on the look on .netcore land and I found out that the VLC library has .net standard libraries to support Windows/Linux/MacOS/Android/iOS/UWP with the help of Xamarin that also meant that the core functionality was on a .netstandard library and of course that also meant it's cross-platform ✅

Third Icons...
no app looks cool without an icon or two... I was kind of lost here since I was not going to use a ton of icons and I didn't want to rely on the internet this had to be 100% offline. Thankfully the mdi icon library provides thousands of icons in a web font or an svg/xaml (canvas)/xaml (DrawImage), I went for XAML/Canvas since I could just do the canvas icons I would need you can find those definitions here let's see a quick sample

that is the icon that represents the "Play" button
with that in mind it seems I already have most of my needs done, let's build something meaningful this time!

Spoilers, it's flat (shocker! 😱), yeah the way F# handles files it's in a top/down manner, so even if you add folders the files have to be in order in the [PROJECT_NAME].fsproj file

the most important files here are Shell, Player, Playlist and PlayerLib.

Shell is the main module and the one that handles external messages from internal controls. If we'd need to add a different "page"/view it would be in this place we also have a subscriptions module inside of Shell which will help us to handle important messages from our media player like if it's playing, pausing, stopped if the media is ending and things like those.

that is our main window, usually, you will see this one called MainWindow. We are registering out subscriptions here so we're able to handle these messages within our Elmish module

A good relevant part here is that there are a few messages that belong only to the Shell, and then the rest of the messages are specific to handle media player elements these messages get called by the subscriptions we used when using our Program.mkProgram function call.

One of the most useful ones here is Stopped, TimeChanged and LengthChanged because that allows us to present a more accurate representation of the media bar. These may or may not trigger a special update within the children's controls.

Some of these events don't actually do anything... why?
They are here for demonstration purposes, let's say you want to save to your persistent storage when a song has been played but only after the user waited for it to finish, then you'll need to handle the Ended message perhaps you want to send an update yo your API to what was the last action the user did, you may need to send a request from any of these options. Most of these are just Commands that you'll be passing around to children controls like Ended and TimeChanged where we tell Playlist and Player that they need to do something (GetNext and SetPos (time) respectively) and you can always remove what you don't need.

Player is the control that contains our play/pause/previous/next/shuffle/repeat buttons it communicates to other controls via external messages. Here we show the two sets of messages this control can dispatch

Why do we use external messages? The external messages is a way for us to leverage the Elmish Top/Down communication seamlessly as we return an ExternalMsg Option type in our update function for this module.
As an example:

To play a song it's a similar flow

Now, you might think well this is a lot of code for a simple event, I'd just register an event listener for the event from the children component in javascript but I'll also say that it's not that simple... In Vue, you might need to use an event bus in aurelia you might need a Event Aggregator in react I think you would be using something like Redux in which case it's already quite similar (read "Prior Art").

And those same 5 steps are shared with almost any other external message it's a predictable way to handle external updates to other controls.
PlayerLib is a module with two special functions that allow us to do the whole player thing working

LibVlCSharp has quite a lot of features including playing media from the network, finding devices like Chromecast and a ton of other media playing information in this case we just need a media player and a media object to play within our media player. 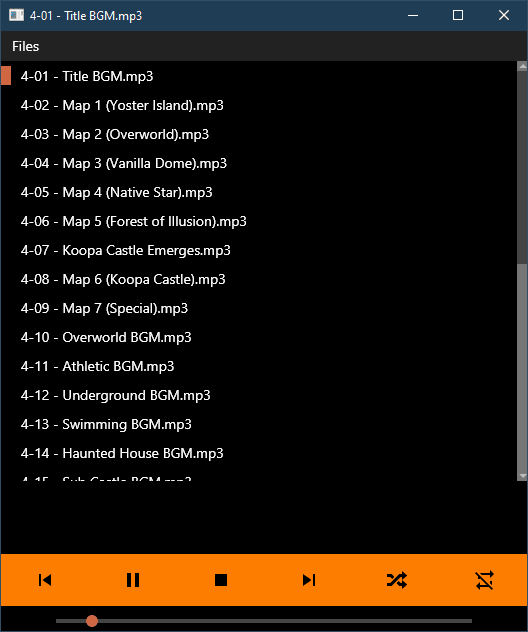 As I said before, it's just dead simple only pick files and play them... No more, no less.

On my last post also I mentioned the following

When I want to do things for myself, I don't want to have a lot of
resources being consumed by a note-taking app

And I did verify that 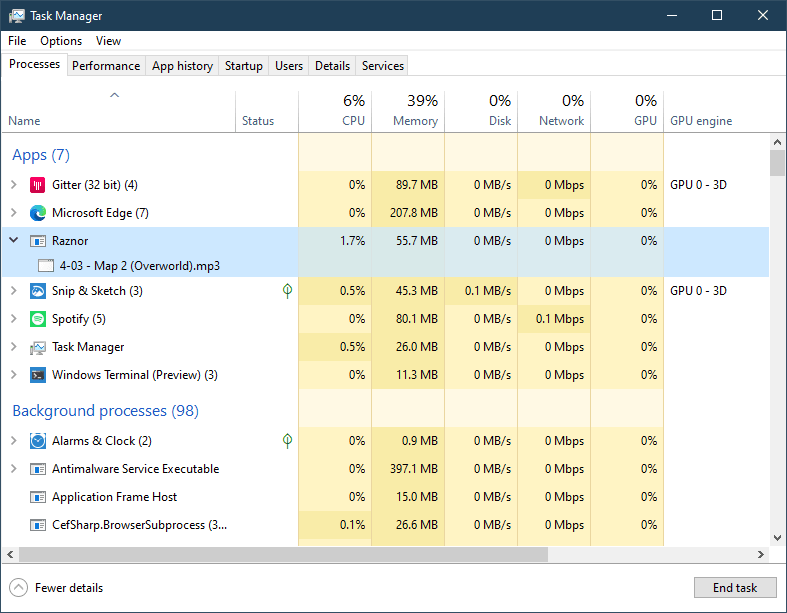 As you can see the app is playing a song and it is using almost 60MB of RAM and nearly 2% CPU usage. I'd say this is the Note Taking App version of the Music Players. I can safely say that I wouldn't mind running the same amount of Avalonia Apps as the Electron ones I currently run (on my main pc) on my old 4gb desktop pc that's somewhere in here.

I won't say anything related to Spotify there because it's not fair comparison Spotify does do a lot more than what my dead simple player does.

Where can I find this?
Two places:

This library allows you to write cross-platform GUI Applications entirely in F# - No XAML, but a declarative Elm-like DSL. MVU (Model-View-Update) architecture support is built in, and bindings to use it with Elmish are also ready to use.

Below is the code of a simple counter app (using the Avalonia.FuncUI.Elmish package).

or the unpolished and unorganized here

This is a sample Avalonia + Avalonia.FuncUI desktop application

Either way, do you have questions or comments? Leave them below or reach me in twitter :) Have a nice week!

.NET Standard explained to developers: What if it was an interface?

Once suspended, tunaxor will not be able to comment or publish posts until their suspension is removed.

Once unsuspended, tunaxor will be able to comment and publish posts again.

Once unpublished, all posts by tunaxor will become hidden and only accessible to themselves.

If tunaxor is not suspended, they can still re-publish their posts from their dashboard.

Once unpublished, this post will become invisible to the public and only accessible to Angel Daniel Munoz Gonzalez.

Thanks for keeping DEV Community 👩‍💻👨‍💻 safe. Here is what you can do to flag tunaxor:

Unflagging tunaxor will restore default visibility to their posts.