This is an in-depth guide showing you how to deploy your Django/React application to a Linux server using Apache. In this specific example, the Linux server will be debian-based, running Ubuntu 22.04, so any commands you are seeing will be for a debian-based distribution.

You can take any part of this post to deploy your app standalone (you can only take the Django part and deploy your full stack Django application and vice versa).

At this time, we will be deploying a Django Rest Framework application using mod wsgi and a React app. Our database is going to be PostgreSQL and we will be using Apache as our web server.

Anything that is contained in brackets [] means you need to enter your own information that is limited to you specifically.

This is a list of requirements you should have ready and be comfortable with using.

At this point, I am assuming you have your Linux server up and running. First of all, SSH connect to your server. It should look something like:

Enter your root password, and you should be in.

Before starting anything, make sure your packages are updated:

We wanna set the host name of the new machine using:

We also need the set the hosts name in the hosts file:

You can create a new user by running:

It's going to ask you to fill out some information. This is completely optional and you can just leave it blank. It really doesn't matter.

We want this new user to be able to run root commands (sudo). We can do that by running:

This will add that user to the sudo group and allow it to run root commands.

Exit out of your server and login as the new user you created:

We want to install a package called ufw. It allows us to allow, deny and in general configure our server firewall very easily. This is a lot easier than using something like iptables.

Next, run these ufw commands. WARNING THE COMMANDS WE ARE ABOUT TO RUN CAN LOCK YOU OUT OF SSH-ING INTO YOUR SERVER, DO NOT MESS THIS UP

We are firstly going to be testing our Django app, so we are not allowing HTTP, but only the specific port 8000 on which our Django app is going to run on. If everything works correctly, we will allow the HTTP port (80).

You can use this command to check what ports you have open:

In this example, we are using PostgreSQL as our database. To install it, simply run

Make sure the service is started:

To enter your PostgreSQL CLI:

This created our database, our user and granted him all the privileges on that database. This completes the PostgreSQL setup. Make sure to remember the database name, user and password, as we will be needing it later.

Firstly, we have to install a couple of things

This will install Python version 3 if it hasn't already been installed and allow us to create a virtual environment for our Django application.

When entering your server, you are most likely located in your user home directory. To make sure, you can check your working directory with

If everything is correct and you are inside your user home directory, you can clone your Django application from any VCS.

Enter the cloned directory. Next, we will create a virtual environment inside our directory.

After activating the environment, we are going to install our packages. As such a skilled software developer, I am assuming you have your requirements in a requirements.txt file. Install them.

Now we need to mess with the settings.py of your Django application to get it ready for deployment. Find your database configuration and change it to the database information we set up earlier, it should look something like this

Ideally, you will have all these information in a seperate .env file.
Next, find your ALLOWED_HOSTS and edit them with the ip address of your server, it should look like this:

Don't forget to set your Debug to False if this is going to production Leaving Debug to True will give too much information in case an error occurs. For security reasons, we do not want this.
Next up, find your static and media URL-s and edit them, they should look like this:

This is an important step because it will allow us to serve static files for things like swagger and access our media folder.
This should be it for the settings configuration, at least for now. Return to your app directory and with the virtual environment activated, we are going to run a couple of commands.

These commands will create the necessary migrations, create the tables in our PostgreSQL database and collect the static needed in the directory we just defined in our settings file.

Finally, we can test if we did everything correctly. We opened up port 8000 at the beginning of this guide, so let's run our server.

If you did everything correctly and go to your server IP address following with port 8000, you should see your Django application. 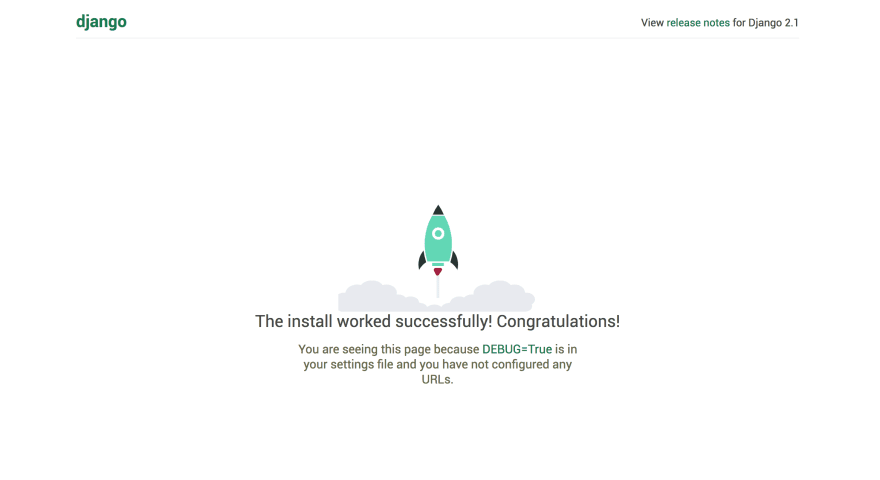 Now of course, we can't have our Django project just running with the runserver command. We want it to be served on our IP address and later domain 24/7 without needing to start anything. This is where Apache and WSGI come into play. Let's install them.

The first step to configuring Apache is happening in the apache2 sites directory. This is where the Apache configuration files are. Head into that directory:

In this directory, make a new configuration file, let's call it django-project.

This means that on your server IP address (*), your Django project will run on port 80. This is the default HTTP port that opens up when you go to your IP address. If you are only deploying Django without React, leave it at 80. If you are going to deploy a React app to interact with Django, set the port to be 8000.

Next up, we are going to use an alias to tell Apache to map requests starting with static to our Django application static folder.

We are going to do the same thing with our media folder.

Next, we will grant access to the wsgi.py inside our Django project. This makes sure Apache can access our wsgi.py file which is how our application talks to Apache.

Next, we are going set up the Daemon mode.

This finished our Virtual Host configuration. Exit out of nano. Now, we have to enable that site through Apache. To do that:

A default site comes with Apache, we don't need it so let's disable it:

To make sure Apache and Django can easily communicate, access media folders, etc.. we have to set up proper permissions. Let's give Apache the ownership of the Django project and the media folder.

If you have followed everything correctly up to this point, you should have Apache web server set up, PostgreSQL set up with a database and user connected to your Django and your Django project set up and served on port 80 or 8000. If you are only deploying Django, this is the end of the guide for you. You have successfully deployed your Django project on a Linux server. If you are deploying React alongside Django, continue reading.

Before setting up the React project, we're gonna be needing Node/NPM. If they aren't already installed, you can run:

After a successful installation, move into your React project directory and install your packages.

Next, we will create a build version for our React project by running the following command:

Before creating a virtual host that will serve our React application, we have to create a config file that will allow routes other than the index. This file is created in the build directory.

After saving the file, let's make sure Apache can use the rewrite engine mod.

We need to restart our apache after enabling a mod:

Next up, we have to configure the virtual host, the process is similar as with Django, but easier. Create a new configuration file in the sites available directory.

Make sure the virtual host looks like the following, exchanging the example names with yours:

This will tell apache to serve our React project on port 80, while our Django backend is serving on port 8000. Like the Django project, enable the site and restart apache:

Let's give apache ownership of our React project directory

To ensure our back-end and front-end communicate without issues, let's edit our apache configuration.

In here we have to make a few changes, first, add these lines:

Now scroll to the bottom of the file and add the last thing needed in the apache configuration file:

To finish off, restart apache one more time:

Thank you for reading my guide. I hope it has helped you entirely deploy your applications from scratch or even help you with a part you were stuck on. Deploying applications is not an easy task, especially without any prior knowledge, which compelled me to write this in depth guide explaining what needs to be done and why. Perhaps some time in the future, I create a part 2 to this guide, connecting these two applications to actual domains and adding SSL certificates.

If you have any questions or you feel like I made a mistake or left something out, feel free to contact me or leave a comment. I will correct it with an explanation. :)

Jan Tumpa
Software Developer mainly focusing on Front-End but also getting more into Back-End. Love expanding my knowledge in tech, trying new things and learning every day.
Defect life cycle in API testing ⚙️
#beginners #api #codenewbie #productivity
How do you motivate yourself to write when so few are reading it?
#discuss #watercooler #meta
#DEVDiscuss: to Specialize or to Generalize?
#devdiscuss #career #beginners

Once suspended, tumpa02 will not be able to comment or publish posts until their suspension is removed.

Once unsuspended, tumpa02 will be able to comment and publish posts again.

Once unpublished, all posts by tumpa02 will become hidden and only accessible to themselves.

If tumpa02 is not suspended, they can still re-publish their posts from their dashboard.

Once unpublished, this post will become invisible to the public and only accessible to Jan Tumpa.

Thanks for keeping DEV Community 👩‍💻👨‍💻 safe. Here is what you can do to flag tumpa02:

Unflagging tumpa02 will restore default visibility to their posts.