This post will be fully dedicated to how you can automate tests for your PowerShell scripts. As a scenario, you have written some new code or modified some old code and now you want to test these changes, in an automated way, before putting them in the Production environment.

Pester is one testing and mocking framework for PowerShell that’ll provide you with a framework for writing and running tests. Its a open source project that’s bundled with Windows 10 and later.

Since we are introducing this automated testing concept and we need a script to test, why not use something already created on this blog!? Therefore, we’ll test the function created during the post “Building a function | Powershell” (If you didn’t read it, now its a good time for it, otherwise will be hard to understand the reason of our tests).

As the first step, we need to load the Pester module and create a new text fixture to allow us test our scripts. For that we will use the following cmdlets.

Notice, on the above image, you should end with two PowerShell script files… One for your code and the other where you’ll built your testing conditions.

Let’s focus mainly on the Set-ServiceRunningStatus.Tests.ps1. Here, if you open your file, you should have something similar to the following…

Explaining a bit of what you have on your test script… The first three commands are to link the test code with your code script. The next two sections are:

First things first, we’ll start by mocking the principal “actions” from our script and are they, Restart and Start services:

With this, we will be able to get a counter of actions triggered and we can compare with what we are testing for the moment of our It clause.

Let’s start with a basic test… Our goal will be “accepts and restarts one running service” and the way we will achieve it will be by using the following:

Let’s execute and see the results so far… 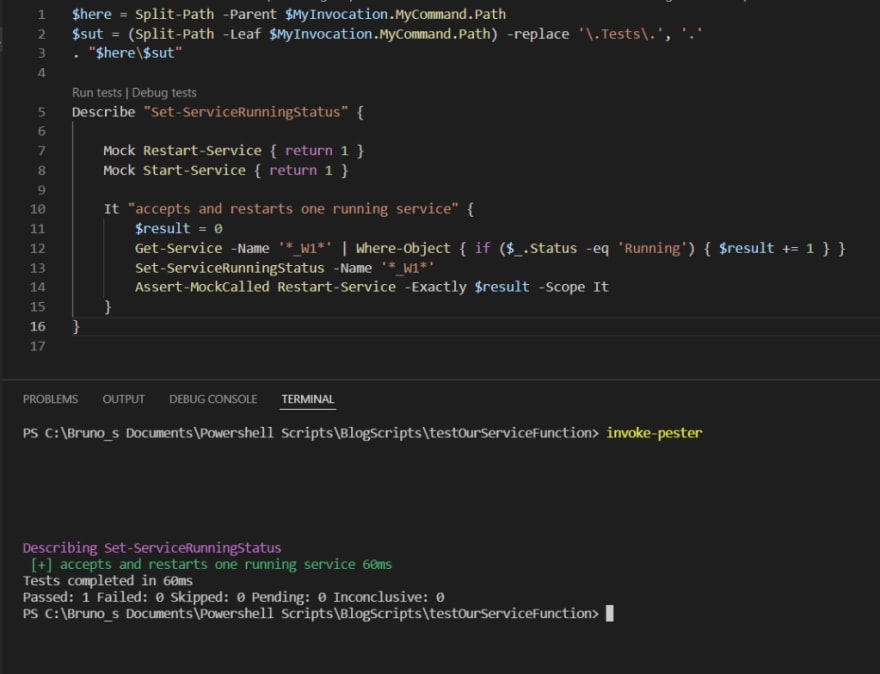 Well, so far so good, 1 out of 1 passed. But how much, quantitively, I’ve covered in my script with the last test!?

We have half of the script, tested. As you can see, besides having the covered percentage we have also the missed commands so far. Let’s give it a try to add more tests and try to cover more amount of the script.

With a few more, like the above ones, we have been able to achieve the following coverage:

And that’s it. Lightly we have been able to see how to test our PowerShell scripts and automate this annoying task… At least for me, it is an annoying one.

We have also been able to see a metric of the code covered by our tests and have a guide of how to achieve better tests and inherently, better solutions with this testing framework.

Note: Besides internet references, I’ve also used the learning concepts acquired in the following book. I advise it as good reading.

Getting started with Azure PowerShell docker Image and GitHub Actions

Laravel Mock Services in order to test your code resolving it.

Once suspended, toolgbrmaker will not be able to comment or publish posts until their suspension is removed.

Once unsuspended, toolgbrmaker will be able to comment and publish posts again.

Once unpublished, all posts by toolgbrmaker will become hidden and only accessible to themselves.

If toolgbrmaker is not suspended, they can still re-publish their posts from their dashboard.

Once unpublished, this post will become invisible to the public and only accessible to ToolGBRMaker.

Thanks for keeping DEV Community safe. Here is what you can do to flag toolgbrmaker:

Unflagging toolgbrmaker will restore default visibility to their posts.