This is klog, a series of posts on my misfortunes and misadventures in maintaining my project klarg. The naming is a bit unfortunate, but it sounded (and still sounds) good. If you haven't checked it out, why are you here?

This log (or klog 😏) is about my struggles to refactor the code. Those who have refactored code are very familiar with the discomfort of going through messy code and fixing it. The most painful part was realizing that I wrote such evil code. Feelings aside, the problem was that a simple parsing library does not need to contain over 1000 lines of code. It's simply not necessary.

I had a set of functions that I needed to call two times, one being for a command line subcommand, and another for a command line command (hmm 🤔, that sounds confusing). Anyway, the way I implemented it was that I copied and pasted the function definition from the command to the subcommand, with both the string and number functions, with minor edits. This meant that if any oof happened to my code, I was in deep trouble. I would have to go and change 4 instances of the code, each with different customizations. Not only that, but inside each copy, there were multiple copies. Just think about that (or look at it) 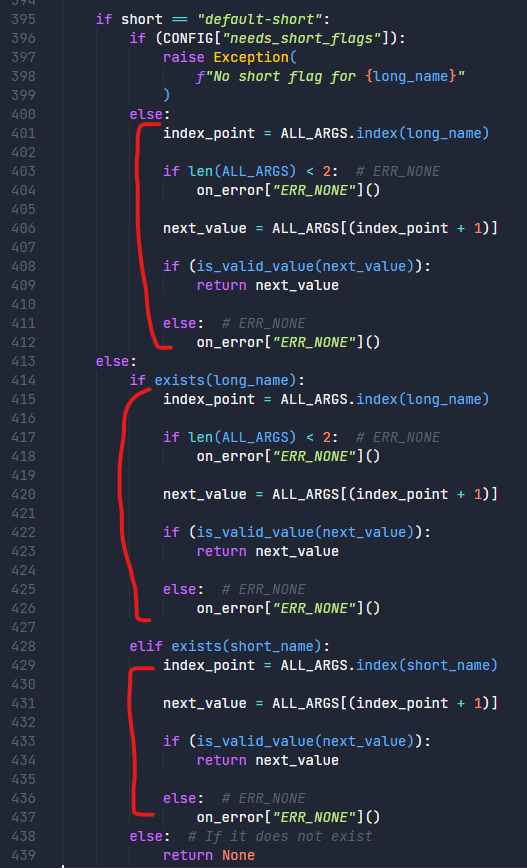 This is twelve copies that need to change if anything goes wrong.

Somehow, I got exactly what I wanted (maybe it's just me, but what developers envision in their head and what it actually becomes a lot of the times doesn't match up). I reduced the code size 19% (203 lines). I uploaded it to GitHub and made a new release.

10 open source projects you should be aware of in 2023

The Python of Revenge!

Top 7 GitHub repositories that will help you master Python🐍

Tomi Adenekan
It was my idea to use your idea
Introducing Klarg v0.0.1
#python #showdev
The Way of the DEVELOPAH
#python #codequality #productivity
How To Install Python on Debian
#linux #python

Once suspended, tominekan will not be able to comment or publish posts until their suspension is removed.

Once unsuspended, tominekan will be able to comment and publish posts again.

Once unpublished, all posts by tominekan will become hidden and only accessible to themselves.

If tominekan is not suspended, they can still re-publish their posts from their dashboard.

Once unpublished, this post will become invisible to the public and only accessible to Tomi Adenekan.

Thanks for keeping DEV Community 👩‍💻👨‍💻 safe. Here is what you can do to flag tominekan:

Unflagging tominekan will restore default visibility to their posts.