Are you a video learner? This blog post is also available in a video form on YouTube:

Look at the animation below 👇

You'll learn how to build it using React and react-spring library.

How to Find an SVG to Animate?

The first step you should take to create an animated SVG is to pick an SVG image you want to animate. If you're a skilled illustrator, you can create your own. But if you're like me, websites like undraw.co will do the trick. However, the SVG we're animating is no longer there at the time of writing this article but you can still find it here.

How to Include an SVG in React?

There are two ways of including an SVG in React code.

The first one is using <img src="kitten.svg" alt="kitten" /> just like with .jpg or .png images. However, this approach is not suitable for animations as you lose control over the individual parts of the SVG you want to animate.

To do that, view the source code of this image, and copy it. Then, head over to https://svg2jsx.com and paste the copied SVG code into the editor on the left. This tool will convert the SVG to JSX. (It will close every unclosed SVG elements and convert attributes such as stop-color to stopColor)

Now copy the code from the editor on the right-hand side and paste it into your editor. The SVG will appear in your browser!

You can view the code for this section in the embedded CodeSandbox below. 👇

How to Prepare the SVG for Animation?

To be able to animate specific parts of the SVG image, you should extract them to individual React components so that it's a bit easier to work with. (Remember, you can treat the SVGs just like HTML and split it into many components.)

Because we want to animate the envelopes let's create a component for each envelope. Now comes the hard—finding out which of almost 300 lines of SVG code create the envelopes.

Open the browser devtools and try to locate the envelope using the element picker. If you locate a part of the SVG which you think is a part of the envelope, you can try deleting it (using the delete key) and see if the envelope (or its part) actually gets removed. (Use ctrl + z or cmd + z to bring it back). 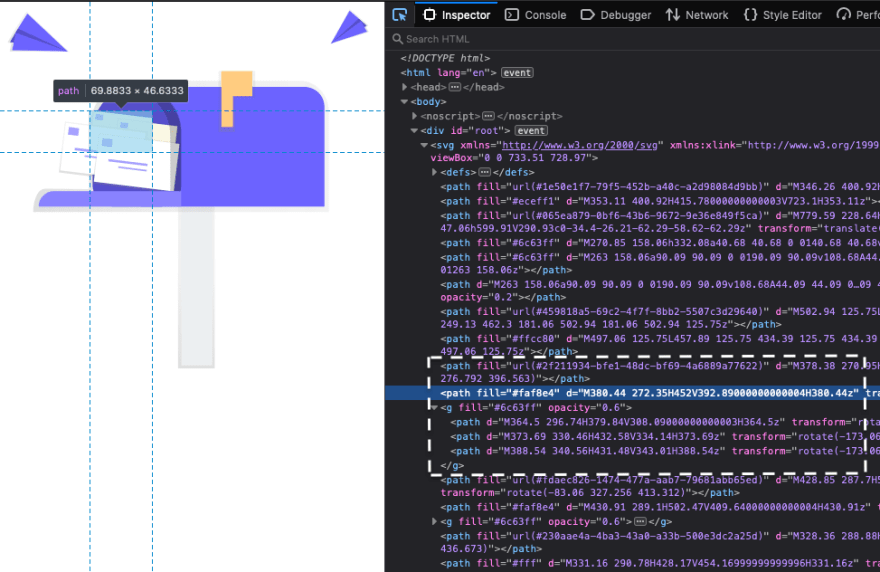 After playing with the devtools for a bit, you can identify that each envelope is composed of two path elements followed by a g element.

Now, you can head over to your editor, create <Envolope1 />, <Envolope2 />, <Envolope3>, and <Envelope4 />. You should use a g element as the parent element in your Envelope components to group the items in it. (Think of the g element as an SVG alternative to the div element.)

The last steps in this part is to create an array of the Envelope component on top of your main component and include it to where the envelopes where in the svg:

The image itself should look exactly the same as at the end of the previous section.

You can view the code for this section in the embedded CodeSandbox below. 👇

How to Animate the SVG Elements?

First, you need something to trigger the animation. Let's use a simple button which will toggle a variable. Based on the value of that variable, the envelopes will arrive or go away.

Now that you have a toggle variable to trigger the animation you can start animating.

For animating an array of elements with react-spring you should use the useSprings hook. (Read the documentation to learn more about it.)

The useSprings hook will return an array of animated values which we can map over.

After creating the springs you are now ready to map over them! The springs variable is an array of so-called "animated values" which you pass to the style property of elements wrapped in animated.g from react-spring.

That wraps up this section! You now have the envelopes moving as you press the "Toggle animation" button.

How to Make the animation look good?

You can probably see that the animation we created doesn't really look so good.

There are at least 3 problems:

Problem 1: The Trajectory Is Too Short

The animation trajectory seems to be a bit too short. That's because you can't see the envelopes when they go past the viewBox of the svg.

Fortunately, the fix is quite easy. You just need to manually adjust the viewBox.

Even though the envelopes are slightly rotated we only animate them in one direction (left-right). It would seem more natural to animate in two directions (left-right + top-bottom).

How to find out how much vertical movement we should add? You could either fine-tune the translate property manually or use a bit of trigonometry. Let's do the latter. 😉

First, let's find out what angle the envelopes are rotated at. You can use the devtools to find that.

Envelopes animate as a group which doesn't really look natural. Creating a staggered effect would make the animation seem much more natural.

Fortunately, it's two lines of code in react-spring as we can specify delay for each animated value.

(It's worth noting that you could also use the useTrail hook instead of useSpring with delay to create a staggered effect.)

Yay! 😲The animation now looks much better! You can find the source code in the CodeSandbox below:

How to Create More Advanced Animations?

This is just the beginning—animating the using the translate3d(...) property is quite similar in SVG and HTML. However, things get more tricky if you try to animate scale, rotate properties.

React vs Vue - Which should you choose?

Unstated Next vs Redux, which is better for managing state in React

Once suspended, tomdohnal will not be able to comment or publish posts until their suspension is removed.

Once unsuspended, tomdohnal will be able to comment and publish posts again.

Once unpublished, all posts by tomdohnal will become hidden and only accessible to themselves.

If tomdohnal is not suspended, they can still re-publish their posts from their dashboard.

Once unpublished, this post will become invisible to the public and only accessible to Tom Dohnal.