If you’ve worked on a project that has constant changes, tests, and needs to be deployed to a server every time the changes occur, then you’re aware how the process of logging in to the server via ssh, redeploying, and testing is quite repetitive and frankly annoying sometimes. Luckily, with the advent of Github actions, this can be automated, leading to a happy developer.

The purpose of this article is to get you introduced to the concept of Github actions for a typical Django app deployment, but it can easily apply to any other framework. So...let’s see some Github actions in action.

According to the official docs, the definition of GitHub actions is;

GitHub Actions is a continuous integration and continuous delivery (CI/CD) platform that allows you to automate your build, test, and deployment pipeline. You can create workflows that build and test every pull request to your repository or deploy merged pull requests to production.

GitHub Actions goes beyond just DevOps and lets you run workflows when other events happen in your repository.

GitHub provides Linux, Windows, and macOS virtual machines to run your workflows, or you can host your own self-hosted runners in your own data center or cloud infrastructure.

What this basically means is that they provide a Continuous Integration and Continuous Delivery pipeline, all in one platform. This is a powerful tool for dev teams and Individual Contributors and is usually a key step in the software development life cycle.

Before we begin, let’s familiarize ourselves with a few terms and concepts that you’ll be seeing along with the post.

Workflows are contained in the .github/workflows directory.

An event is a specific activity in a repository that triggers a workflow run. For example, an event can be a pull request, push, comment, and so on. For more explanation on this, see events that trigger workflows.

A job is a set of steps that execute on your workflow in the same runner. An example of a job would be running unit tests. A step can either be a shell script that will be executed or an action to be run. Steps are executed in order and are dependent on each other. Since each step is executed on the same runner, you can share data from one step to another. For example, you can have a step that builds your application followed by a step that tests the application that was built. which is what we’re going to be doing.

An action is a custom application for the GitHub Actions platform that performs a complex but frequently repeated task. Actions help reduce the amount of repetitive code that you write in your workflow files. An action can pull your git repository from GitHub, set up the correct toolchain for your build environment, or set up the authentication to your cloud provider.

You can write your own actions, or you can find actions to use in your workflows in the GitHub Marketplace.

A runner is a server that runs your workflows when they're triggered. Each runner can run a single job at a time. GitHub provides Ubuntu Linux, Microsoft Windows, and macOS runners to run your workflows; each workflow run executes in a fresh, newly-provisioned virtual machine.

Secrets are environment variables that your jobs depend on. These are usually sensitive information that you wouldn’t want to be exposed to the public. Such secrets include; secret keys, API keys, access tokens, and passwords.

What you need for this config

Before we set up our first workflow, you’ll need a few things.

For this tutorial, we need to first understand what our objective is before we write any workflow files.

We want our workflow to;

On your repo, switch to a new branch, in my case, I have a workflows branch.

Open the tests.yml file and paste the following code.

Starting from the top, we specify our workflow name

This can be whatever name you want but always use a name that’s easy to remember and descriptive of what the file does.

The on keyword is the entrypoint for our events, in this file, we’d like the action to run every time a push and a pull request is made to the main branch. This way, tests will always run if these scenarios are triggered.

This bit has a few configurations.

steps - Next, we define the series of steps the job will follow. Steps are usually sequential, that is, they’re executed one after the other.

The first step is a caveat to note when working with act in a local environment (for mac users). It’ll likely throw an error that there’s a problem setting up python. The command is a bash script that resolves this issue. You can ignore it if you won’t face such a headwind.

This next step sets up the python versions specified in the matrix. We install the dependencies and update pip in the bash script. (defined in the run keyword)

Finally, we run our tests.

Since we’ll need to test our actions locally first, create a .secrets file in your project root. I decided to name mine ‘act.secrets’.

For a more detailed explanation of how secrets work, check out the official documentation.

Drumrolls 🥁🥁.... if you set up everything correctly, the output should be like this; 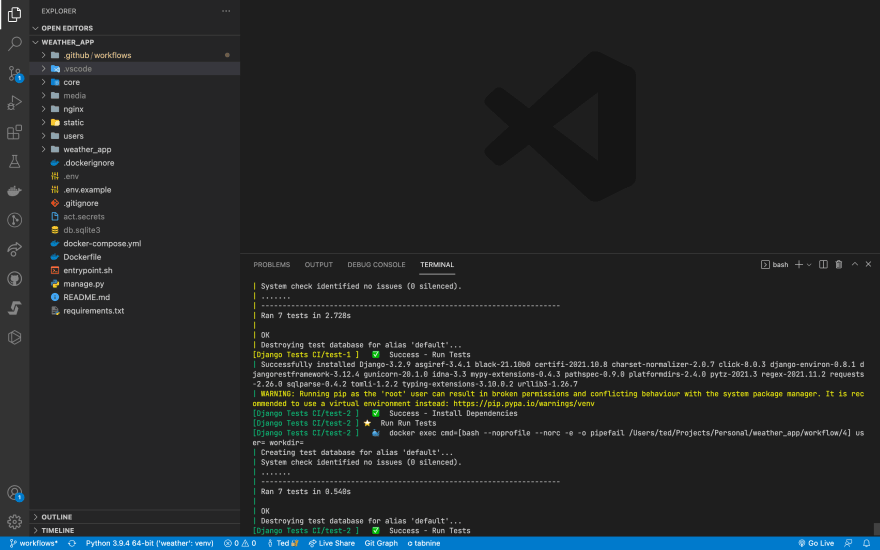 Now that we’ve set up our tests action, we’ll need to pass deploy to our server when we merge into the main branch.

For this, make a deploy.yml file under the workflows folder and paste the following snippet.

Like the first file, this folder follows the same structure, just different commands. I will cover the new parts.

if: ${{ !env.ACT }} - this command instructs the nektos/act package to ignore this job. This is because, in most cases, we don’t want to deploy to our server from our local environment.

This action requires us to define a few secrets. The final expected GitHub secrets for this job are;

Finally, we run a series of commands once the action has managed to ssh into the server. Since I’m using docker and docker-compose, my pipeline is as follows.

For the final piece, push the code to Github, make a PR to the main branch(remember this will trigger the test workflow). Once the tests have run, merge the PR, and if you followed along fine, the tests and deployment actions will be set in motion.

If you configured everything well, the output should be similar to this. 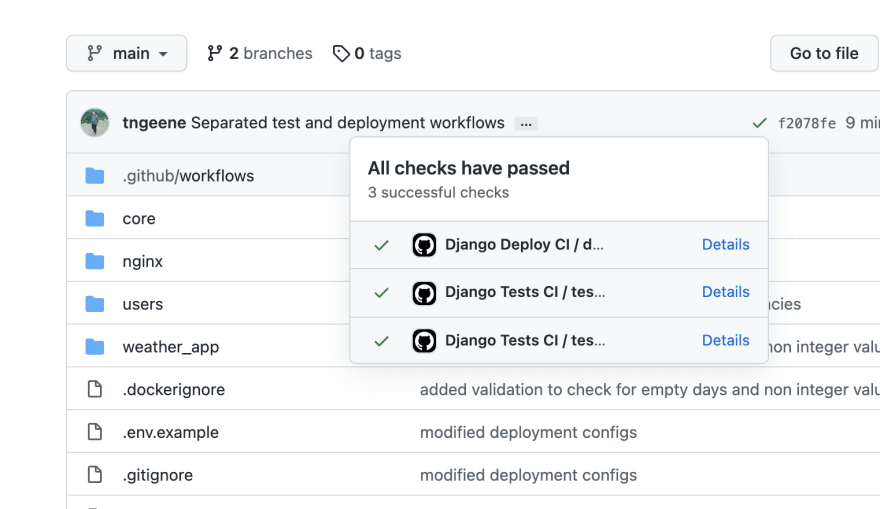 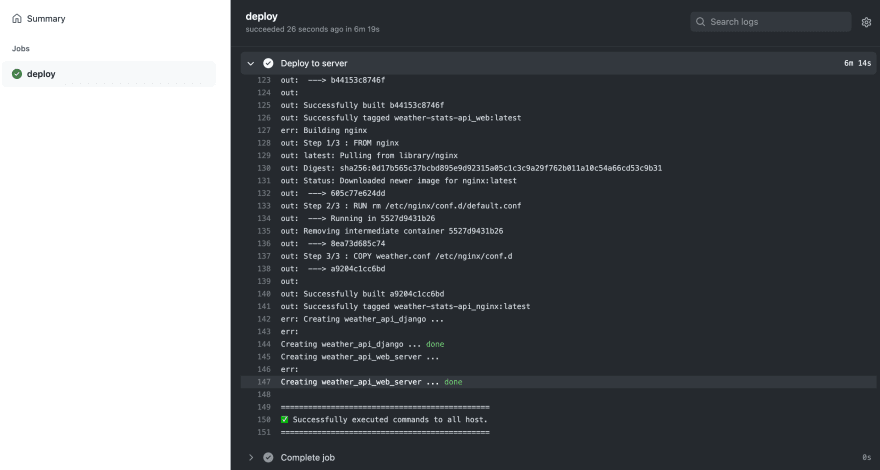 The content of this post can be nerve-wracking and seem a lot to bite, however, if you feel you need further reading on some of the concepts explained, do check out these curated resources I used while doing my research.

Github actions offer a way for DevOps teams to quickly set up a CI/CD pipeline. In this post, we set up a Django application, with some automated tests. We also set up two GitHub actions; one that automatically runs our tests when a pull request is made to the main branch, and another that automatically deploys the application to a virtual private server.

You can read further on working with different environments, setting up restrictions on certain actions and deploying your own actions to the Github marketplace.

Thanks for following along this far and I hope this goes a long way to aid in saving your precious time by avoiding manually doing this.

If you have any thoughts, extra pointers, or just a comment, feel free to reach out by leaving a comment, or shooting up a dm on Twitter

How to automatically merge dependabot pull requests with Github Actions ?