Jetpack Compose is expected to become the preferred ui toolkit for Android and perhaps Kotlin-based Desktop apps. In several articles I have demonstrated how to use it. This one and its follow-ups will contain a more exploratory approach.

As of May 2021 Jetpack Compose consists of six broad areas:

Have you noticed that I listed those areas in a specific order? While you can easily write wonderful Compose apps that do not use animation or material you will almost certainly need runtime and foundation. How about the first one, compiler?

Well, while it is of utmost importance to get the machinery going, you do not need to include it in your build.gradle file. Let's do it anyway, so that we can peek inside a little: 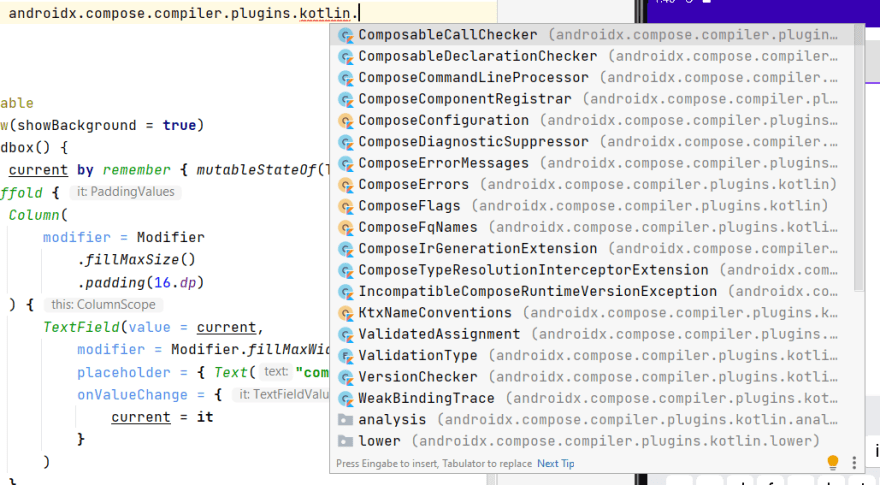 Doesn't look like we would want to invoke any of these manually, right? 🤣

Please recall: while (besides being annotated with @Composable) composables look like ordinary Kotlin functions, they are heavily processed during compile time.

On the other hand function references of @Composable functions are not currently supported.

Another important thing to recall is that @Composable invocations can only happen from the context of a @Composable function.

Talking about @Composable inevitably brings us to the second area, as the annotation is located in package androidx.compose.runtime.

As of May 2021 its description is rather sparse. We have 14 interfaces with interesting names like Applier, Composer, Composition and State. And 12 classes, among them Recomposer and Updater. One enum (Recomposer.State) and 14 annotations.

is used to communicate some guarantees to the compose compiler
about how a certain type or function will behave.

can be applied to Composable functions in order to prevent code
from being generated which allow this function's execution to be
skipped or restarted.

Now, which of these are parts of the Compose clockwork, and which will we be using in our apps?

Assume, at some point you are invoking androidx.compose.material.Text("Hello Compose"). The resulting call chain has quite a few steps, among them are BasicText() and CoreText(). Both reside in androidx.compose.foundation.text. CoreText(), by the way, has an internal modifier. More importantly, it invokes yet another composable, Layout() in package androidx.compose.ui.layout.

Layout is the main core component for layout. It can be used
to measure and position zero or more layout children.

For a composable able to define its content according to the
incoming constraints, see
androidx.compose.foundation.layout.BoxWithConstraints. 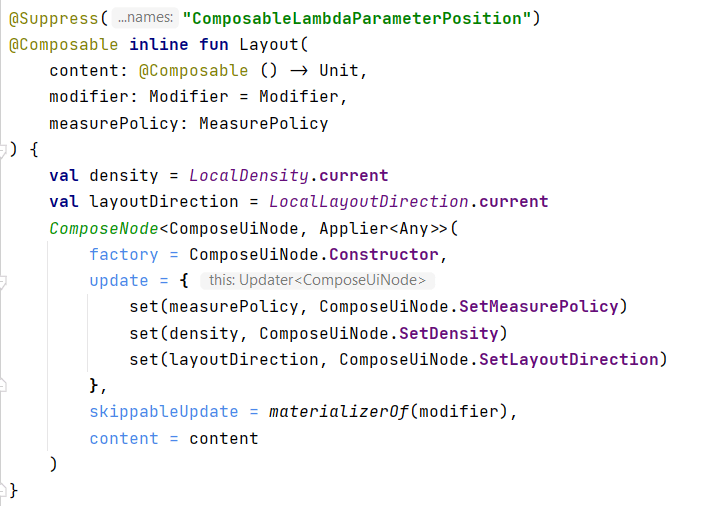 With the invocation of ComposeNode we make our way back to package androidx.compose.runtime. The docs say:

Emits a node into the composition of type T. Nodes emitted
inside of content will become children of the emitted node. 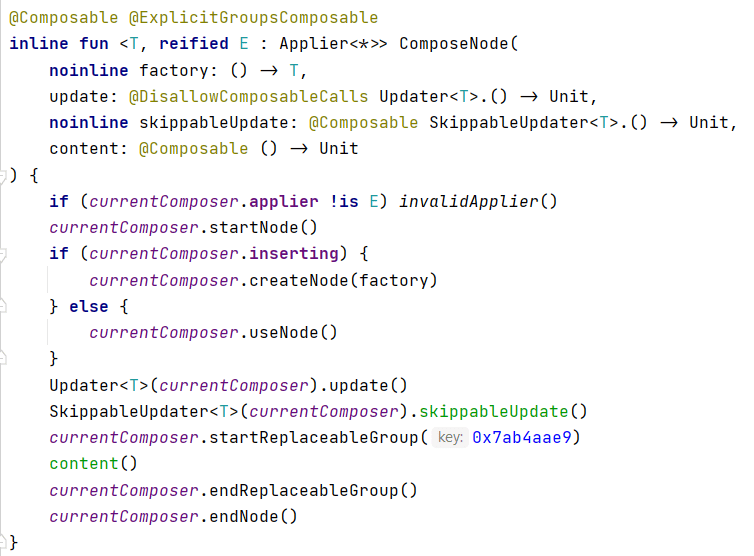 Without going into too much detail we see heavy use of currentComposer, which is an instance of the Composer interface. It is based upon the concept of nodes. Updater is

A helper receiver scope class used by ComposeNode to help
write code to initialized and update a node.

At this point you might recall the title of this article, Cartographing Jetpack Compose, and ask yourself if we still are on track. We are, as we now have quite some understanding of the innards of Compose. We have seen that invoking composables leeds to building and updating node-based structures. How they become - or lead to - what we see on screen is another interesting story I may be telling later.

In this episode we have cartographed two areas, compose.compiler and compose.runtime. The first one is very important, yet uninteresting from an apps' perspective. The latter one both drives the (re-)composition of the ui and offers key elements like @Composable and Layout. We have already seen foundation briefly. Please stay tuned for a more detailed look.

Which programming language should you learn in 2022 to remain relevant and also increase your revenue.

Why Pick Kotlin Over Java for Your Android App Development?