What MPM are you using?

Pre-loading is a security Risk

When using mod_wsgi five initialization is deferred until after the processes forked, any application code required python modules are then lazily loaded, if initializing python and loading wsgi application in the worker process can be expensive,

Why can't we preload everything in Apache parent process before the worker process were forked.

Even if a python web application were designed to be able to pre-loaded and run properly after the processes was forked the key issue that uses application ocuured on startup would run as root, if executed in the parent process and this is one very big security risk.

when the interpreter is destroyed combined with the way in which Apache reloads mod_wsgi when restarting the python interpreter will leak memory into the Apache parent process if Apache restarts have done on a regular basis the size of the Apache process will grow over time and thus so will the forked worker processes effectively have a memory leak.

The only reason that the default for Apache specifies such a large value for max clients and thus a large number of processes when threading is used is because of slow clients and keep-alive, a high number is required to support concurrent session from many users if using single threaded processes this means, there should be much more memory available.

A much better solution is to put is Nginx proxy in front of Apache, the nginx server will isolate apache from slow clients as a leaning forwarded request, when it is completely available and can be handled immediately the nginx server can also handle keep-alive connections, then keep-alive can be turned off on apache, this will allow us to significantly reduce the number of processes needded for Apache to handle the same ammount of traffic as before.

Reducing Per Thread Memory Use

Even at 2 MB in Apache 2. this could mean that 25 threads >>> 50 MB can be hold by the persistent memory pools at eash process when running mod_wsgi and normal circumstances this should not be much call for memory to be allocated from the per request memory pool. 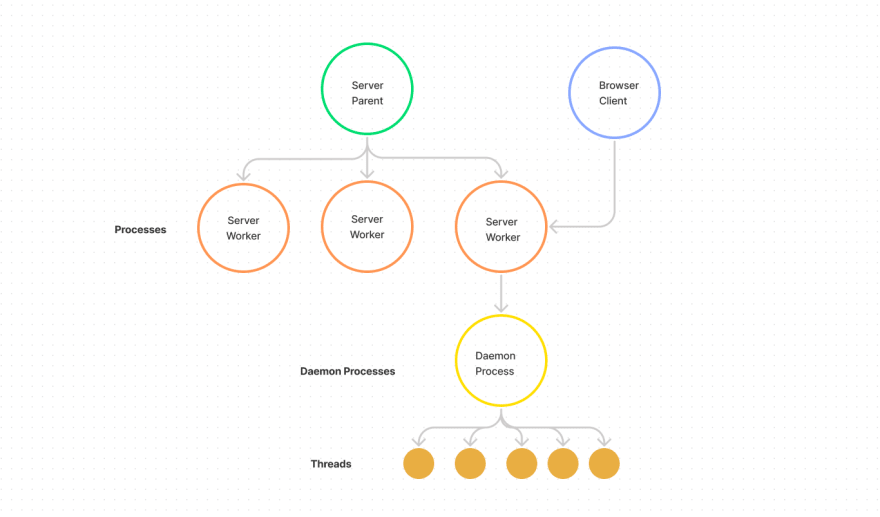 Now the configuration for frefork or worker MPM are princiapply an issue when using ehat is called embedded mode of mod_wsgi, that is wsgi application runs inside of the Apache server child processes, the dynamics scaling algorithm in Apache being what can cause us grief when doing this.

Use mod_wsgi Daemon mode in this case wsgi application runs in a separate set of managed proccesses the main difference when using daemon mode is that there is no automatic scaling on the number of processes, the number of processes and the thread is instead fixed, being fixed everything is more predictable and then you only need to ensure you have sufficient resources, using daemon mode the need to have nginx as frontend proxy is reduced as the apache server child worker process are serving much the same purpose in isolating wsgi application from the clients.

Because the apache server process is now only acting as proxy forwarding request to the mod_wsgi daemon mode process as well as serving static files we don't need to initialize the python interpreter in the Apache server processes.

Process creation is again lightweight and we have to sidestep the need to have to pay so much attention to the apache MPM settings.

The thing that make Apache Suck

Infrastructure as Code on AWS using Go and Pulumi

How to learn AWS for free ?