One day, I was reading an article What is the need of having a design system. They mentioned some crucial point to be noticed in the articles.

What is a Design System?
A design system is a collection of reusable components, guided by clear standards, that can be assembled together to build any number of applications.

If you are looking for Open Sourced Design Systems Click Here. This contains all big projects.

What is Tailwind CSS?
Tailwind CSS is basically a utility-first CSS framework for rapidly building custom user interfaces. It is a highly customizable, low-level CSS framework that gives you all of the building blocks you need to build bespoke designs without any annoying opinionated styles you have to fight to override.

If you are looking to use TailwindCSS Without SvelteKit, Visit TailwindCSS Docs. They explain everything in detail.

What is SvelteKit?
SvelteKit is an app framework (or 'metaframework') built on top of Svelte (which is a component framework). Its job is to make it easy to build Svelte apps with all the modern best practices like server-side rendering (SSR) and code-splitting.

This command is going to install your all dependencies for the project. Now run your SvelteKit project to live dev server using

How do i know what will npm run dev will do? For that in your project root directory find a file package.json and in this file there is a Dictionary by name of scripts. Read it and if you have any trouble ask in comment or google it.

This will do SvelteKit setup. Now we will see how to setup Tailwind CSS in this project.

This will install TailwindCSS, PostCSS, AutoPrefixer and Svelte Preprocess. For more about them please google. 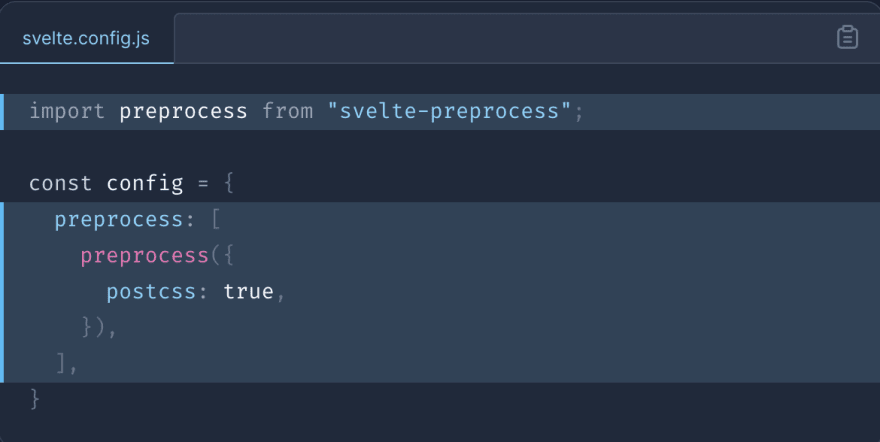 On dev serve you will find it. For more, how tailwind classes work => use tailwind docs.

This is the end of first part.

To read second part of this series click here.

This is me writing for you. If you wanna ask or suggest anything please put it in comment.

Emotion vs Tailwind CSS vs Styled-Components

Typescript for beginners: Setting up a new project using ReactJs

Unleash the Power of Your Data: 6 ES6 Array Functions You Need to Know 🚀

Once suspended, theether0 will not be able to comment or publish posts until their suspension is removed.

Once unsuspended, theether0 will be able to comment and publish posts again.

Once unpublished, all posts by theether0 will become hidden and only accessible to themselves.

If theether0 is not suspended, they can still re-publish their posts from their dashboard.

Once unpublished, this post will become invisible to the public and only accessible to Shivam Meena.

Thanks for keeping DEV Community 👩‍💻👨‍💻 safe. Here is what you can do to flag theether0:

Unflagging theether0 will restore default visibility to their posts.