While learning about web3 and blockchain technologies at The Agile Monkeys, we found out Flow. According to them, "Flow was designed for exceptional consumer and developer UX". And after playing with it for some time, I agree with that. Their developer UX is among the best, if not the best, we've tried. Some things that make Flow different are:

First of all, why will we build a notepad on the blockchain? That makes no sense! I know paying gas fees for creating notes wouldn't be an ideal use case. But the Internet is already crowded with NFTs tutorials, and I wanted a more classic approach for non-web3 devs that illustrates how Smart Contracts + the user account in Flow can act as the API and the backend of our hypothetical dApp. And hopefully, this will give you more ideas about other possible dApps!

Cadence is a resource-oriented programming language. This means it makes it easy to work with digital assets (resources) as if they were physical assets. A resource can only be in one place at a time. So, for example, if you assign (this is, move with the <- operator) a resource to a new variable, the resource won't be available in the original variable anymore, and that variable will be invalid:

This makes the experience of working with digital assets pretty natural. A resource can't be left forgotten in a variable. It must live in your user account or should be destroyed at the end of the function you are currently executing. Otherwise, the compiler will complain about the resource loss. It's pretty safe in this regard.

I encourage you to read the quick Introduction to Cadence and the Cadence Language Reference before continuing this tutorial if you want to understand things better. Much of the language's syntax is inspired by Swift, Kotlin, and TypeScript, so you could feel at home if you are used to them.

Open a Flow Playground; you will see something like this:

You'll find the test accounts, the transactions, and the script folders in the left sidebar. Transactions are mutations of the blockchain and require gas fees. Scripts are read-only, blazing-fast operations that allow you to perform queries without paying gas fees. Anyway, we don't need to worry about transaction fees in this tutorial.

The user's account filesystem domain structure can be seen as this: 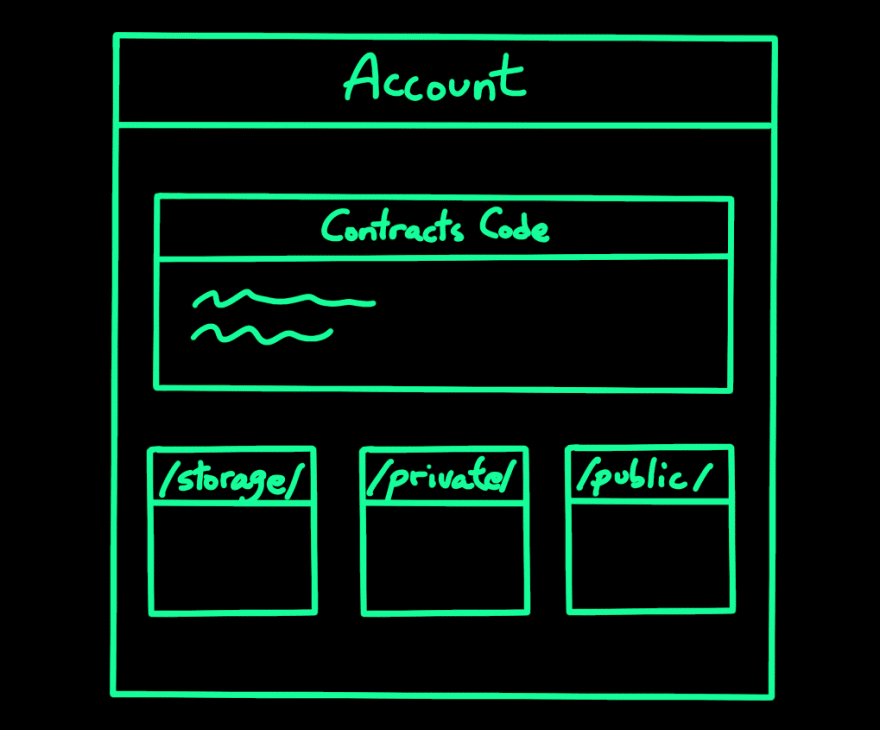 According to Flow docs:

Transactions have access to the /storage/ and /private/ domains of the accounts that signed the transaction. Transactions can also read and call functions in public contracts and access public domains in other users' accounts.

I wanted to deploy a public contract in one user address and let the other users use it without needing to deploy the contract to every account that wants to use it. So let's start by selecting the 0x01 user account in the sidebar, removing the example code, and pasting our contract code. The code includes comments so you can understand the reasoning behind every part as part of this tutorial:
`

Next, let's deploy the contract by tapping on the Deploy or Redeploy button at the top-right corner of the Playground:

Once the contract is deployed to the 0x01 account, you will see it in the sidebar:

Now it's time to test our contract using Transactions and Scripts. Let's start by adding a new transaction to the sidebar. This transaction will create the needed notepad and test the API by adding, editing, and deleting notes:

To execute this transaction, tap on the Send button in the top-right corner of the Playground, but make sure you add the 0x02 account as the signer, so you test the transaction from a different account from where the contract is located (0x01): 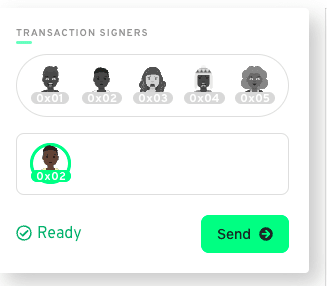 After sending it, it will be executed, and you will see the logs in the Transaction Results console:

If you enable the Resources Explorer by tapping on the database icon next to the 0x02 account in the sidebar, you will see an empty storage panel above the Transaction Result console:

The notepad containing the notes should appear there. This is a recent bug in the Playground they haven't fixed yet. It was working in previous versions. But don't worry, we can check the content with a script.

So let's create a new script in the sidebar and paste this code:

Execute the script by tapping on the Execute button on the top-right side of the Playground, and you will see the result printed in the console. The notepad containing the edited note:

Finally, if you want to easily reset all data stored in the Playground accounts, you can do it by redeploying the contract.

Link to the full Playground

That is enough for now! I hope you have enjoyed playing with Flow. In the next article, we'll learn to deploy the contract to the actual testnet, create a native iOS dApp that leverages all of this, and communicates directly with the Flow's network. Link to the second part:

Learning how to code: the first 3 steps

Once suspended, theagilemonkeys will not be able to comment or publish posts until their suspension is removed.

Once unsuspended, theagilemonkeys will be able to comment and publish posts again.

Once unpublished, all posts by theagilemonkeys will become hidden and only accessible to themselves.

If theagilemonkeys is not suspended, they can still re-publish their posts from their dashboard.

Once unpublished, this post will become invisible to the public and only accessible to Juan Sagasti.

Thanks for keeping DEV Community 👩‍💻👨‍💻 safe. Here is what you can do to flag theagilemonkeys:

Unflagging theagilemonkeys will restore default visibility to their posts.