This is the second and final part of a web3 tutorial about the Flow blockchain. Understanding the first part is essential and a pre-requisite because I explain there how to create and test Smart Contracts, the one we developed to create notes, its API, and how to write transactions and scripts to mutate and read data in the blockchain. Please take your time and make sure you understand it before continuing :)

First part: A notepad in the Flow blockchain

So, in this final part, you will learn:

Note that the NotepadManager contract we will be using in the iOS dApp is already deployed in a flow account of my own. Remember that you can use any public smart contract in the blockchain, so you don't need to deploy the contract again in every account that wants to use it, as we learned in the previous article. This step is only for learning purposes in case you are interested in how to deploy contracts. You can skip this section and go directly to the dApp implementation part.

We are going to deploy the NotepadManager contract to the testnet, which is nearly identical to the mainnet, but we can operate without paying real gas. This is ideal for learning and testing our projects before deploying them to the production network (mainnet).

Note that we emptied the "emulators" field because we won't be using the local emulator but a real network. We also added the "contracts" and "deployments" fields to point to our contract and account.

Remember to fill the "address" and "key" fields, as specified. You obtained your account address in step #3 and the private key in step #2. Be careful with that key, and don't commit it to a public repository.

Now that everything is set up, it's time to deploy the contract! In the terminal, in your project folder, do:

Which can be read as:

You can see the transaction status or the account details through blockchain explorers like Tesnet Flowscan or Flow View Source. For example, if I introduce my account address 0x9bde7238c9c39e97 in Flowscan: 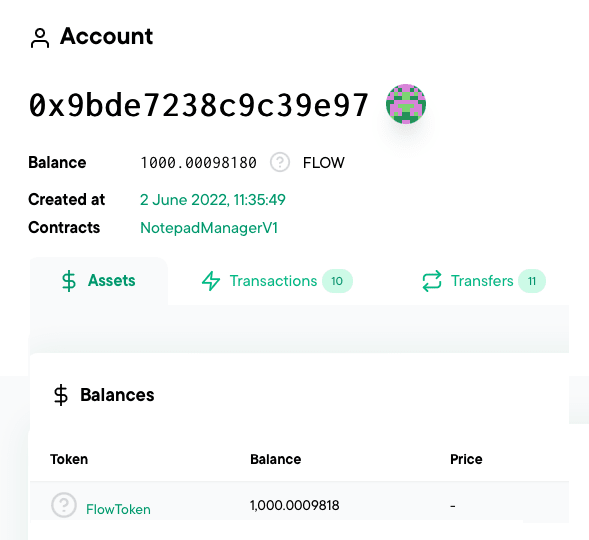 Our iOS dApp will have a pretty straightforward architecture:

All the elements in that picture are .swift files. You can start by creating an Xcode project (iOS 15.5 for the time being) and all those files. Files with the ...View suffix are SwiftUI views.

For communicating with the Flow blockchain, we will be using the iOS SDK that Outblock is building. A big update containing breaking changes is planned to be released soon, so we are going to lock now the SDK version to a particular commit (latest as of today) to be sure our code keeps working overtime. To do that, just add the dependency of the Swift Package Manager tied to the b4a9cfaaa0003f3f250490e6ccdf8b75065199a3 commit:

Now we can start adding code to our Swift files!

This is the entry point of our app. It's in charge of initializing the fcl-swift framework with the needed endpoints to communicate with the Flow blockchain and Blocto Wallet and showing the LoginView or the MyNotesView depending on the user's authorization state.

Simple screen with a big login button that invokes the authenticate() method on the LoginVM ViewModel.

The authenticate() method will invoke the FCL's authentication method, which will present us with the Blocto Wallet webView for the user to log in. After successful authentication, the FCL's currentUser property will be populated, triggering an update in our FlowNotesApp class, which is listening to that property. The MyNotesView will be shown then.

This view is in charge of showing the list of notes retrieved by MyNotesVM. The users can also:

You will note that the transactions are pretty slow compared to a regular backend. This is because mutations of the blockchain need to be accepted and mined, which could take several seconds to happen. For simplicity, we present a full-screen loading screen while the VM's state is loading, until the transaction is sealed and a script can safely retrieve the final result. Read-only operations (scripts) like the notes fetch are blazing fast. If the transaction fails with an error, we present it to the user with an AlertView.

As you see, the transactions and script code used here are nearly identical to the ones in the first article (I omitted the comments in these to avoid repetition):

This is the VM that defines the set of operations available to mutate the notepad through transactions or fetch the notes through a script.

Every time you send a transaction, the SDK will present a transaction confirmation screen (webView) from the Blocto Wallet, so you can review the transaction's code and approve it:

The NoteEditorView is just a form to compose and send a new note.

And that's it! I hope you find this helpful and that it inspires you to find more cool use cases. If you want to see a full demo video in action and check this project's source code, please refer to the FlowNotes repository.

There's an edit transaction use case in the NotepadManager contract that I haven't used in the app. I leave it to you as an exercise if you are motivated enough :)

Once suspended, theagilemonkeys will not be able to comment or publish posts until their suspension is removed.

Once unsuspended, theagilemonkeys will be able to comment and publish posts again.

Once unpublished, all posts by theagilemonkeys will become hidden and only accessible to themselves.

If theagilemonkeys is not suspended, they can still re-publish their posts from their dashboard.

Once unpublished, this post will become invisible to the public and only accessible to Juan Sagasti.

Thanks for keeping DEV Community 👩‍💻👨‍💻 safe. Here is what you can do to flag theagilemonkeys:

Unflagging theagilemonkeys will restore default visibility to their posts.