Numerical variables, also known as quantitative variables, are the type of data that represent something measurable or countable like frequency, measurement, etc. Another attribute of numerical variables is that they are always numbers that can be placed in a meaningful order with consistent intervals.

As examples of quantitative variables we may mention:

Numerical variables may be either discrete or continuous.

Discrete values are the result of counting, like when we count how many goals a football team has scored in a season. Here, the data take certain numerical values, like 60, 65, 72, and so on.

On the other hand, continuous values are the result of a measurement. For instance, we may measure the weights in kilograms of football team players, and the data will assume continuous values inside a range, like 84.1kg, 74.89483kg.

Buckets and bins are the way we may organize the numerical data collected in a meaningful order with consistent intervals to analyze and make insights from them. For example, we might collect the number of movies produced in the 20th Century and put them in buckets of 10 years, and as result, we could see the evolution of the Movie Industry in the last century.

But in this article, we will demonstrate a bit of numerical data using the Kaggle Google Play Store Apps dataset from Lavanya Gupta as we did in the article about Categorical Variables.

Using pandas, we will load the dataset, but only the Rating column, which is a typical numerical variable. The users rated the Apps from 1.0 to 5.0. 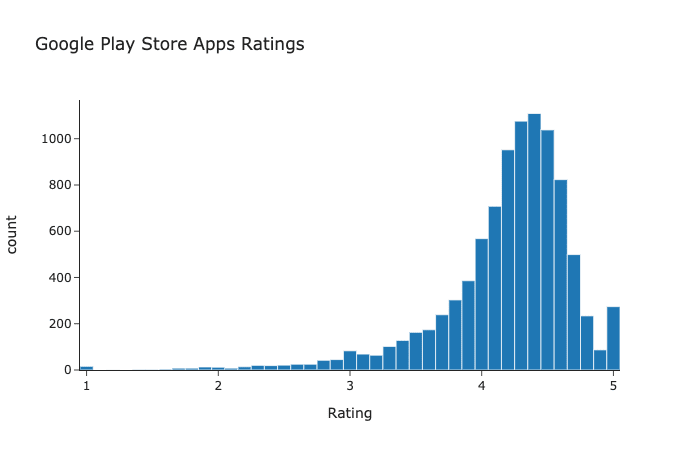 The chart we see above is a Histogram, which seems like the Bar Chart we've plotted in the Categorical Variable post, but actually they have some important differences. In a Histogram there is no space between the bars, and the intervals are equally spaced, as expected to numerical values.

Other shapes a histogram can have are right skew, symmetric, bimodal, uniform. Perhaps we will see more examples of histogram shapes in the next posts!

Bugs: a blessing and a curse

An Overview of Blockchain and Web3

Once suspended, thalesbruno will not be able to comment or publish posts until their suspension is removed.

Once unsuspended, thalesbruno will be able to comment and publish posts again.

Once unpublished, all posts by thalesbruno will become hidden and only accessible to themselves.

If thalesbruno is not suspended, they can still re-publish their posts from their dashboard.

Once unpublished, this post will become invisible to the public and only accessible to Thales Bruno.

Thanks for keeping DEV Community safe. Here is what you can do to flag thalesbruno:

Unflagging thalesbruno will restore default visibility to their posts.