Things have a way of popping up in your mind, like the universe creates stars from dust, so have long ideas been created in a bang. It lights up in the mind for a split of a second, distorting your planes or we can say terraforming our minds as we go. The internet, a spectacular word if this present, changing all that connects to it. It has a way of influencing its users perhaps none could have thought something so inorganic, lifeless or automated could do. The internet, if defined could be considered a global exchange of data that its users feed into it and the same users convert to information which values them. 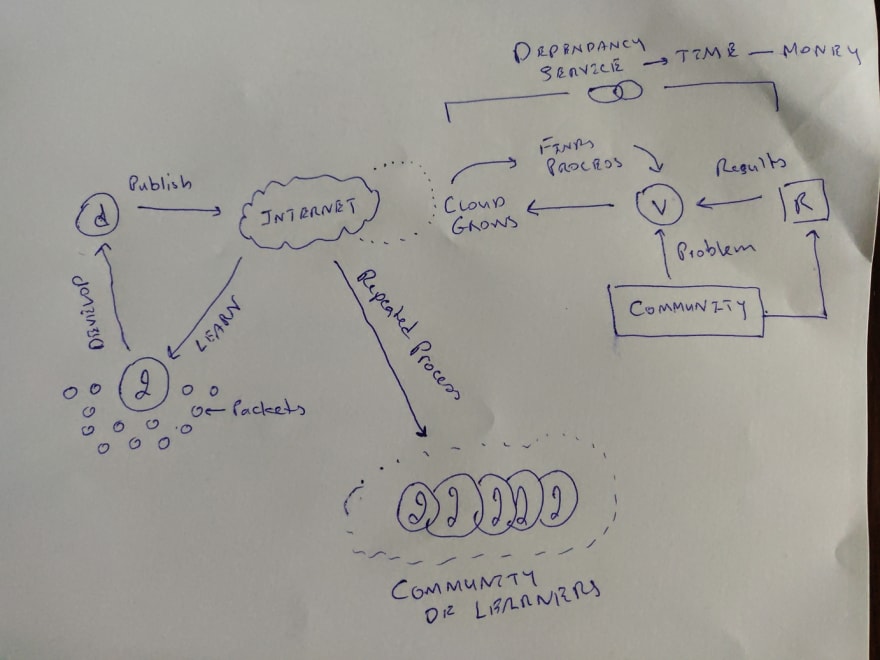 A map just formed in my mind which i wanted to share to improve my understanding in ways that i have perceived the digital age. In this map, the internet is a cloud of data and information, by defining that data is a set of numbers, strings and variables that occupy a storage and once someone or some user accesses that storage and makes that data in to some conclusive results, it becomes information to us. Therefore, in this case, I am a user of internet, I leech the information and data, collecting it to my mind in small packets, narrowing down those packets in forms of information that are more comforting and a use to me. I have devised more packets, that automate my tasks, my problems, my solutions and eventually my life. Innovation would then be a process in which I make my life around me more comfortable for the very start of it. These small packets and nano processes, that I have created for myself, somehow creep their way around my family and friends. Now i am a nano internet myself to them, the same storage vault on a much smaller scale. The process repeats and my family and friends make further nano processes for themselves and I being the observer of my processes, eventually tend to find multiple more uses and cases in which life could be made more innovative.

This facade of information starts to intrigue the I and then the I starts to become a we, as it starts to develop those packets ready for publishing either as data or information in a storage vault known as the Internet. Once, it uploads, the happening occurs, a happening where the cloud which is the internet grows slightly in size.

Now imagine, there are other I`s that repeat the process because that is all what the Internet has done as it become real. The storage vault grows in size and impact maybe that's why there sub-communities within bigger communities and so on and so forth.

“I alone cannot change the world, but I can cast a stone across the waters to create many ripples.” – Mother Teresa

Now let's imagine once more a third entity known as the viewer comes to the internet with a problem that is dire for him and his community but to its amaze some other community has already devised a process that tends to atleast project the problems solution. The viewer in desperate need takes all it has and applies the process to its community. As a process gets applied it produces results which are then uploaded or shared back into the process. This cycle repeats and it find tunes the process to cater towards the community and a solution is formed where to us known as an error is just a more catered process to a specific community.

To my dazzled mind, i think, we could rationalize anything once it starts repeating itself, isn't the universe working on similar principles, just as newton rationalized gravity, he was able to deduce a law which now mankind could exploit, the same can be said for einstein and countless others. Once we rationalize ‘’’this that we call the internet’, many laws governing it could be discovered which does not mean the end of the world through AI, now I find that a bit ridiculous because after Newton discovered gravity, the world didn't end but it started. Maybe we need laws that we discover not laws that we make i.e ‘’’Net Neutrality’.

Async Await from Beginner to Advanced Features Including Concurrency

A Beginner's Reference to SQL vs. NoSQL

Productivity: Are you a fox 🦊 or a hedgehog 🦔?