An important part of offensive security is basically knowing what to attack. Sometimes you have to face a really big project and before launching any kind of attack, you must learn the weaknesses and as much as information about your target as you could gather. Good for us, there are tons of useful tools and resources for this.

When trying to get subdomains of a target, we have for example Subl1st3r. Gathering subdomains is important because you might find a forgotten subdomain with unpatched bugs that can lead us to bigger issues, data leaks and more. Subl1st3r is an open Linux terminal, for example using python3 sublist3r.py -d mydomain.com. Another useful tool is knockpy, it's slow but it gathers tons of subdomains, this is a nice tool even though it doesn't use Python 3, that's why I would add here Photon, which does and is similar to knockpy, plus is faster. 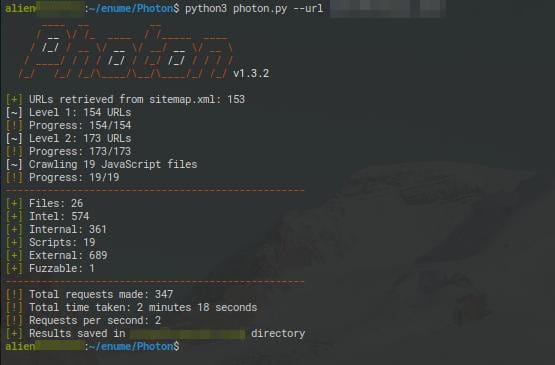 What I like the most about this last one is that it creates a directory with all the information. So nice and tidy!

Let's not forget about some famous tools such as: Shodan, Censys or Hunter.io. These are nice, some of them allow you to have an API key in order to build tools with them.

There are some frameworks for making these ❀⋆❀ even tidier ❀⋆❀ ! For example Spiderfoot. After trying to set up other frameworks, the first time I faced Spiderfoot I was expecting tons of bug handling and issues but it was quite easy, just git clone it, pip3 install -r requirements.txt and execute! easy pie. This tool is interesting because apart from launching tons of tools (some of them need an API key for gathering information) it generates graphs, which is very useful. And by the way it's so pretty well documented so if you are new with this, you will thank them.

Learning this, you might want consider cleaning up your webpage in order not to let anything spreading information about it that should not be there!

Once suspended, terceranexus6 will not be able to comment or publish posts until their suspension is removed.

Once unsuspended, terceranexus6 will be able to comment and publish posts again.

Once unpublished, all posts by terceranexus6 will become hidden and only accessible to themselves.

If terceranexus6 is not suspended, they can still re-publish their posts from their dashboard.

Once unpublished, this post will become invisible to the public and only accessible to Paula.