This is the beginning of a long journey to learn how to get things to finally, finally align properly on our webpages.

Today's tutorial is about two properties: text-align and vertical-align. Text align is a very simple property, often the first to be learned by beginners. Vertical align seems to be its simple counterpoint, but can be deceptive due to its complex rules and is an early stumbling block for many.

The purpose of text-align is to align text horizontally. Play around with it:

If you've worked with any sort of text editor before, these options will be strikingly familiar.

There are more options coming soon - for example, start and end, which depend on the text direction, aligning via a specific character (such as a decimal), and justify-all, which forces the last line of text to be justified. These vary widely in support as of the authoring date (Aug 2019), as they are currently still editor's drafts in terms of specification - so make sure to check compatibility tables before using anything fancy.

As you might have guessed by the name, the purpose of vertical-align is to align text vertically. In the sample below, I have highlighted some key plant-related phrases; the buttons toggle the vertical align property of these highlights.

If you're applying vertical-align to display: inline or display: inline-block elements, then you will be able to align them with each other. You can align anything that can flow horizontally, as long as it has a valid display property set. Text, images, icons, buttons, inputs...

When using vertical-align on inline or inline-block elements, the alignment is relative to sibling elements in a horizontal line, rather than the parent element.

Vertical align also works on tables (as well as elements with display set to table-cell). Here's a sample table to play around with:

So if you're thinking... "wait, vertical-align didn't work for me! Why are you telling lies?", look into your element's display property. Vertical-align is not an all-purpose way to align everything. Since block level elements cannot have an in-flow sibling on the same line as them, they will not be aligned. Block elements can, however, have children inherit their vertical-align property; it's not strictly invalid, just useless for positioning.

If you remember the days of table-based layout (way, waaaay back... hopefully), you might remember the valign attribute on table cells. It's speculated that the vertical-align property was created specifically to emulate the behavior of this attribute.

Use this for vertically aligning text, images, icons, or other things that display "in line" with each other horizontally. Unless you're using it in a table, vertical align changes items' behavior relative to each other, rather than with respect to their parent element.

Here's a neat trick that uses vertical align. I don't use it in production anymore now that flexbox is well-supported, but it's still a good exploration of how vertical align works.

This trick is an extension of the fact that vertical align works to center inline-block elements with one another. 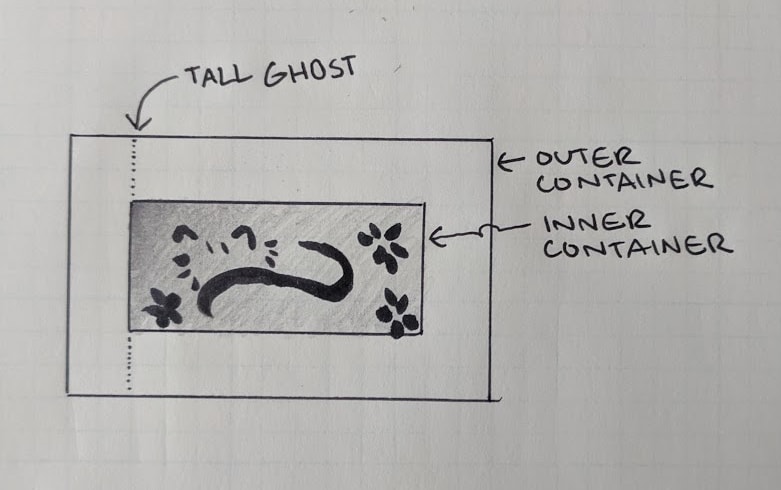 The invisible aligning element is set to be the height of its parent with height: 100%, so whatever is aligned vertically with the "tall ghost" will happen to align with its parent block element. The two elements inside the container are both inline-block, and so they are available to vertically align with each other. They're both set to vertical-align: middle. And so, the inner container that we want to align (the cat) sits in the middle.

Now, that code is a bit messy, so we can clean it up by using pseudo-elements:

There are a couple other small notes:

Anything else you'd like to know about these properties? Any requests for the next entry in the series? I have a lot planned... it turns out CSS has a lot of ways to align stuff. (How come none of them ever work? 🤔)

Once suspended, tchaflich will not be able to comment or publish posts until their suspension is removed.

Once unsuspended, tchaflich will be able to comment and publish posts again.

Once unpublished, all posts by tchaflich will become hidden and only accessible to themselves.

If tchaflich is not suspended, they can still re-publish their posts from their dashboard.

Once unpublished, this post will become invisible to the public and only accessible to Thomas C. Haflich.

Thanks for keeping DEV Community 👩‍💻👨‍💻 safe. Here is what you can do to flag tchaflich:

Unflagging tchaflich will restore default visibility to their posts.