In this tutorial you'll learn to create a SFTP server. SFTP stands for SSH File Transfer Protocol, and is a secure way to transfer files between machines using an encrypted SSH connection. Although similar in name, this is a different protocol than FTP (File Transfer Protocol), but SFTP is widely supported by modern FTP clients.

SFTP is available by default with no additional configuration on all servers with SSH access enabled. Though it’s secure and fairly straightforward to use, one disadvantage of SFTP is that in a standard configuration, the SSH server grants file transfer access and terminal shell access to all users with an account on the system. In many cases, it is more secure to apply granular control over user permissions. For example, you may want to allow certain users to only perform file transfers, but prevent them from gaining terminal access to the server over SSH.

Here you’ll set up the SSH daemon to limit SFTP access to one directory with no SSH access allowed on a per-user basis.

Note : For Ubuntu just use apt instead of yum(CentOS) pkg manager.

Step-1) Create a new user(s) out of which first two will be granted access to sftp server.

After this you will be prompted to create password and fill some additional info about user. To check the SFTP working we will not add normal_user to sftpusers groups hence it will not get access to SFTP server.
Now you have created users that will be granted the access to restricted directory.
Let's create a group and add the users into it.

In order to restrict SFTP access to one directory, you first have to make sure the directory complies with the SSH server’s permissions requirements, which are very specific.
Specifically, the directory itself and all directories before it in the filesystem tree must be owned by root and not writable by anyone else. At the same time, it’s not possible to give restricted access to a user’s home directory because home directories are owned by the user, not root.

Set the owner of /var/www to root:

Give root write permissions to the same directory, and give other users only read and execute rights:

Now change the ownership of public_ftp directory that you have just created. The following command will make the owner of this directory to sftp-user1 or its corresponding group.
Now the directory structure is in place, you can configure the SSH server itself.

Scroll to the very bottom of the file and add the following configuration snippet:

🚨 Note: Here’s what each directive does:

Step-4 Run the sshd command to test the changes, then restart the service and Verify the configuration

Important: If this step is performed incorrectly, it might break your SSHD configuration.

Now to Verify the Configuration
Let’s ensure that our new user can only transfer files. As mentioned previously, SFTP is used to transfer files between machines. You can verify this works by testing a transfer between your local machine and server.
First, try logging into your server as the user you created in Step 1. Because of the settings you added to the SSH configuration file, this won’t be possible:

You’ll receive the following message before being returned to your original prompt:

This means that sftp-user1 can no longer access the server shell using SSH.

Next, verify if the user can successfully access SFTP for file transfer:

Instead of an error message, this command will generate a successful login message with an interactive prompt:

You can list the directory contents using ls in the prompt:

This will show the public_ftp directory that was created in the previous step and return you to the sftp> prompt: 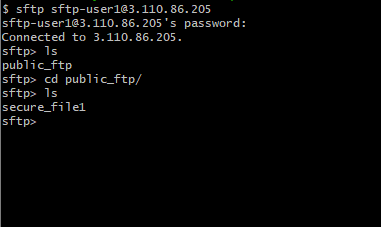 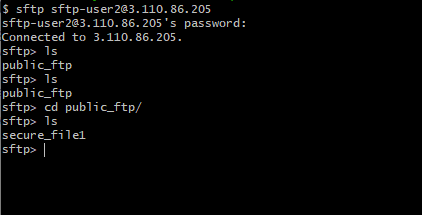 App with self-contained infrastructure on AWS

Thanks for keeping DEV Community 👩‍💻👨‍💻 safe. Here is what you can do to flag tanmaygi: