White box testing is a type of software testing that does contribution to software quality engineering in software engineering. The main requirement of this type of testing is that you must have comprehensive knowledge of the source code. You must also have deep acquisition with the software, networks, applications, and system access in general.

White box testing is usually performed by developers but QA testers can also do it if they meet the requirements stated above. Implementation of the white box testing helps them verify the input and output flows through the entire application or a specific software package. This evaluating software approach examines the internal structure, coding, software inner-working, or even design.

Using the white-box method can highlight the next subjects in software:

All of these subjects help you to test software solutions infrastructure and the internal coding. Glass box testing, clear box testing, transparent box testing, open box testing, or code-based testing – all of them are just other names for the white box testing technique.

Imagine a client invited you to test their gallery. You come into a well-lit room with many paintings; you are told where to turn off/on the light, where the entrance is, where the client keeps their money, or even what their pipe systems look like. They give you the complete picture before you can start writing your test case.

You look around and notice that one of the pipes is leaking, it is dripping onto one of the paintings, and there is a possibility that this could cause a short. So you tell the client about these issues to prevent possible problems before opening the gallery. This is the key function of white box testing.

But it is not only a single software testing method. For example, an opposing method of testing – black-box testing. The main idea of this testing is to emulate real-life threats and risks, but you are only allowed to test certain parts to which you have access.

When we talk about black-box testing, you can input your data to the system or its piece without knowing its internal structure and mechanisms, and by observing the output, you make decisions if everything works correctly or not.

Let’s get back to our gallery example and how black-box testing would work there. You stand right at the entrance and turn on the light, gas, and water. You spend 30 mins in there, and if you can’t smell gas leakage, you don’t see smoke coming from the entrance door, and the floor is still dry, you can assume the systems are working fine.

So, you can’t see the inner workings of the software or software application. None of the internal components or parts of internal structures are known, coding processes are hidden. In this situation, this approach involves testing the end-user experience, while being able to test all or certain parts of the application code, system, or its unit. And this can be done by adding an input and by observing the output. 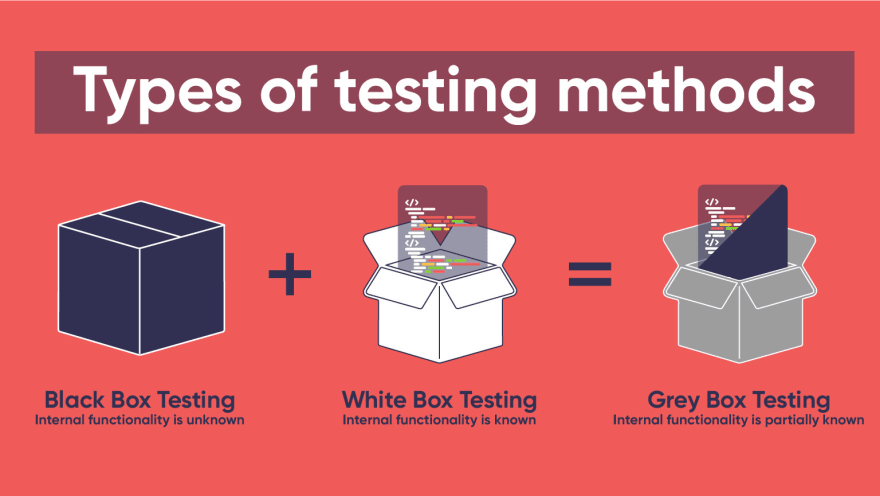 There is also a third approach in testing – grey box testing. It is a combination of the other two methods – both black box testing and white box testing – in which a QA tester has some knowledge of the internal system. For example, you know that water is dripping on the painting, but you don’t know how the piping system is configured.

Now that we understand the types of testing methods, let’s take a detailed look into white box testing. Why is it so popular, and what does it entail?

A couple of advantages and disadvantages go along with white box testing.

Successful prevention depends on where you get involved as a tester. If you are able to test new systems, applications, networks, or infrastructures during the development and initial rollout phases, or even right after it is rolled out, you still have a chance to warn your team of potential risks.

No limits on bug detecting

Technical expertise is going to play a big part in white box testing, but even if you have a lack of technical knowledge it is not going to stop you from finding as many bugs as possible.

You can also detect bugs in the hidden code, which is challenging for black-box testing. And the earlier you find them in the software development lifecycle, the faster software developers can avoid those bugs from being pushed into production.

Anyone who uses white box testing knows how comprehensive it is. You can see the big picture from the very beginning and check the most vulnerable parts for bugs. You don’t need to wait until designers are done with the graphic user interface. You can help developers reduce the number of lines of code in their application or software in general, and this testing type is easy to automate.

Though the cons of white box testing are not too critical, they can still make you change your mind in favor of using a different method such as black-box testing or grey box testing.

Here are some disadvantages that you should consider too.

White box testing is often a time-consuming method. The number of possible scenarios, code lines, all the paths, etc., all of these can prolong the testing process for days, weeks, and even months.

You have to be thorough and check every piece of an application or internal structure, verify this with developers, look at the product from different perspectives until everyone is confident that the testing process was completed accurately.

In April 2020, a security researcher from India, Bhavuk Jain, found a critical vulnerability in Apple software, specifically at “Sign in with Apple.” This overlooked bug could allow somebody to access an account or the system with just an email. That vulnerability was on the surface all that time, but that was critical enough. So Apple had to pay $100,000 to the guy for finding this breach.

Of course, they could save this money if a QA tester checked minor things before rolling it out. This is an excellent example of what can happen if we don’t keep “simple” bugs in mind. And this is one of the disadvantages of white box testing. This method can increase the presence of minor bugs because it is mostly human-based testing. Testers are focused on how the product functions in general and don’t pay attention to minute details.

White box testing is an expensive and complex method. The high cost is justified with high payments for QA testers who are knowledgeable in several programming languages and have the experience to perform this type of testing. In addition to this, you need to add the cost of the time the testers will need to spend on it.

If the disadvantages of white box testing do not scarе you away and you are still ready to go with it, let’s see what types of this method there are.

These three types of white-box testing can be applied: unit, integration, and system. Unit testing is the first and essential stage that is done by developers. Although other types are important as well, they always go after.

Unit testing ensures thаt source code meets quality criteria before rolling out, which creates a reliable software engineering environment for all developers. And as a result, there is more efficiency and optimization, better code, and less wasted time and money.

This type of test is usually run after unit testing is dоne. Integrating testing is intended to find errors that can occur while connecting the different interfaces with each other.

To execute this testing type, you should test the application’s source code components as an entity.

Regression testing requires that you verify that recent changes in the application’s source code didn’t have the side effects on the features that were changed during the development phase. It is needed to ensure that the old code still works fine with newly implemented features and fixed bugs.

For this, you should re-run the test that you have already finished and compare how the application’s functionality works.

Mutation testing deserves special attention. This approach is usually considered as the last step of understanding if the entire test was carried out successfully.

Testers modify specific components of the source code of an application to verify if all conditions are met, and software tests can detect any executed changes. These changes implemented in the software are supposed to origin errors in the program.

The essential part of white testing is test coverage. This technique determines if your test cases cover the application source code and what code volume is exercised when you run those test cases.

The good thing about the coverage techniques is that you can evaluate some of them with formulas that are also called QA metrics. Here are examples of such coverages and formulas:

The main goal of this technique is to ensure that all lines of the code have been tested and detect any mistakes or hidden errors in the entire code.

This technique examines the accuracy of a software application’s possible path or decision point.

Together with statement coverage, it helps to define the number of functions that have been implemented.

There is another type of coverage – path coverage – that is worth QA testers’ attention because it checks complicated builds of software applications, even though we don’t provide a formula for this.

Path coverage tests all the paths whether they are crossed or not, and it is more critical to check the coverage of paths than branches.

How can I get prepared for White Box testing as a QA tester?

First of all, learn the language of your source code. The white-box testing center is based on the application’s source code and understanding it is crucial for efficient results of executed tests. This means you need to know at least one software programming language (but the more the better), mainly the language used to write this code.

This can also help you get ready for security testing and prevent the code from injecting malicious code lines from external sources or finding out other security threats.

Secondly, you need to check the correct flow of the source code and make sure that everything is structured well. How to do this? And again, learn programming languages. It might help you to write additional code for testing the main one. Therefore to spend less time on manual testing.

How to perform White Box Testing with aqua ALM 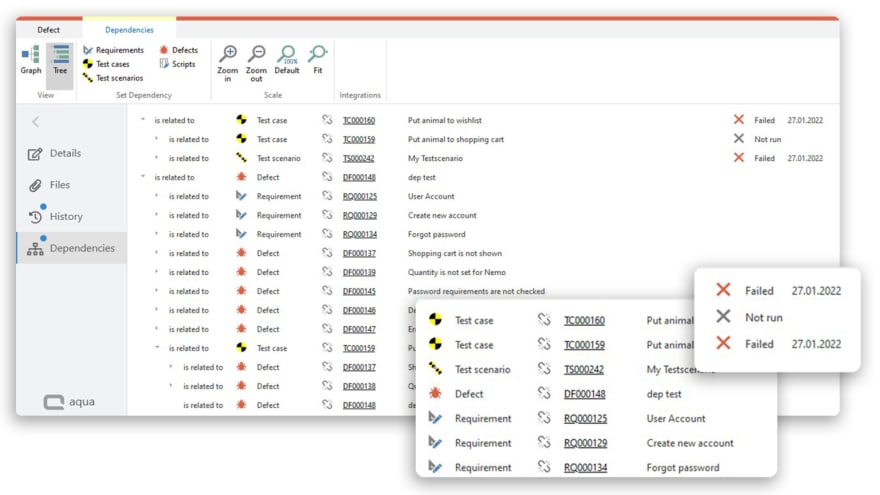 White box testing remains one of the best approaches to verify the functionality of the system and identify most of the defects, though it is mostly impossible to test every single detail of the code with only human involvement and get 100% accuracy.

What Is the Difference Between Coding and Programming?

How to learn any framework easily?

Once suspended, taniazhydkova will not be able to comment or publish posts until their suspension is removed.

Once unsuspended, taniazhydkova will be able to comment and publish posts again.

Once unpublished, all posts by taniazhydkova will become hidden and only accessible to themselves.

If taniazhydkova is not suspended, they can still re-publish their posts from their dashboard.

Once unpublished, this post will become invisible to the public and only accessible to taniazhydkova.

Thanks for keeping DEV Community safe. Here is what you can do to flag taniazhydkova:

Unflagging taniazhydkova will restore default visibility to their posts.