One day, browsing through software development communities I came across the following image: 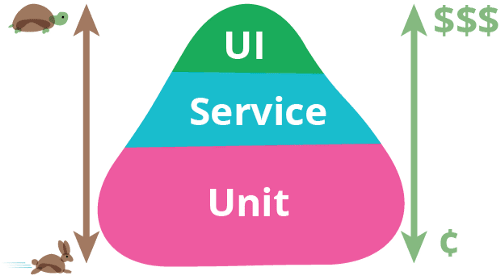 I confess that the first time I didn't understand what the image was about, but I was sure that a cheap rabbit was better than an expensive turtle.

Time passed, I finally learned what unit tests are, what this cheap rabbit represents and I would like to help you understand too.

But what are unit tests?

A unit test is basically testing the smallest testable part of a program.

Okay, but what does that mean?

If you pr the grass in a language that supports functional paradigm for example, the smallest testable part of your code should be a function. So a unit test would be the test of any function. In the case of object orientation it would be the testing of a method of your object.

Well… as everything is easier to understand in practice, let's go to the code!

In the example below, we have a function that adds two numbers and returns the sum value.

To test this code, all we need to do is run the function and check if its output value is what we expect.

What are unit tests for?
Asking what unit tests or any other automated tests are for is a great question, after all there are several ways that apparently are faster to test if my function is doing what it should. I could just run the code to make sure it's working.

So why am I going to write other code to test my code? What makes sure the second code works? Who tests the test?

Unit tests, as well as any automated tests, are not primarily for verifying that a specific function is working, but rather to ensure that your application continues to work after any changes to your code base.

Why write unit tests?
It may seem tempting at first not to write tests for a function you have just developed, after all, it is customary to write more code to test a function than the function code itself. But you must remember that you will spend most of your development time on a system working on its maintenance.

Your application will soon have a few hundred functions running, and in many times running each other, your code base gets huge and soon becomes humanly impossible to manually test after any change. Unit tests most often take just a few seconds to test your entire application.

Where to start?
There are several unit testing tools for each programming language. You can get started by reading the documentation for these tools from their examples.

Okay, but I still don't understand the cheap Rabbit and Expensive Turtle thing
I won't close this post without first explaining what the test pyramid means.

It's a concept developed by Mike Cohn that says you should have a lot more unit tests (unit tests) than GUI tests which are more user-level tests. Like clicking on a link for example.

The Pyramid Concept explains how costly GUI tests are compared to unit tests, as they take much longer to run and are also difficult to maintain, while unit tests are much simpler, faster and cheaper.

If you liked this blog post, consider following me for more such stuff. Also, feel free to add your thoughts!

3 Types of Software Testing for Developers

How to Accept Payments in Your Flutter Application

Once unpublished, this post will become invisible to the public and only accessible to TalhaKhalid101.

Thanks for keeping DEV Community safe. Here is what you can do to flag talhakhalid101:

Unflagging talhakhalid101 will restore default visibility to their posts.