I've always been curious as to what my pets get up to when I'm out of the house. This curiosity finally got the best of me this week and I decided to build I wanted to build a dog bark detection system in order to keep track of how often our two dogs bark.

This guide covers the second of three guides around how the Dog Bark Detector was built; specifically focusing on the Serverless Audio Processing. You can see the components highlighted below that are core to this section of the guide. 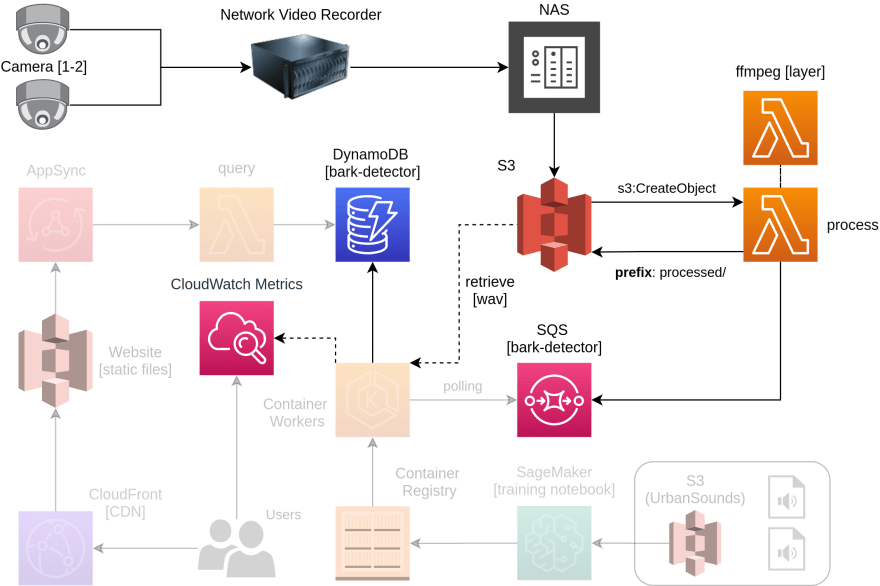 It covers the following concepts at a high level along with providing all the source code and resources you will need to create your own version.

NOTE: For a look at the full implementation of this project, check out t04glovern/dog-bark-detection where this post specifically focuses on the processor folder.

As always before we get started it is always a good idea to do some research on what kinds of projects already exist out there that save us writing something from scratch. In order to know what to search for however, we first must define what we want to achieve. Below are some general notes I took based on what was already created as part of the Machine Learning Model creation step:

Using the information above I decided to look at ways to convert the 30 minute video clips that I get from my camera system into small bite sized chunks. In the past I've always used FFMPEG for these scenarios and actually wrote another blog post Serverless Watermark using AWS Lambda Layers & FFmpeg that does exactly what we are likely to what to do (except with Video to Audio).

Starting off lets get a simple Lambda project working with an FFMPEG layer. On top of my own post, I referred heavily to this one by Daniel Schep as well to bootstrap a simple Serverless project.

To start with I created a Serverless project. Serverless is a fantastic framework for orchestrating cloud resources with basic YAML

Add a new layer to the project by adding the following to the serverless.yml file

Then create a folder and include the layer build

Now if we want to use the Lambda layer as part of a Lambda function, we can simply reference it in the Serverless yaml. Below is an example of how this reference looks like for our project.

One of the core services used for this project is Amazon S3 due to a neat little feature called S3 Events. When items are added to S3 you are able to fire off events to services like AWS Lambda which can capture and process this event for you. This particular feature comes in handy as our process flow looks like the following:

Take a look at how we define an S3 even in the serverless.yml file under functions.

Notice that we can define that the event should only fire when objects are created, and have the file extension .mp4. The code within our lambda function can be found in the t04glovern/dog-bark-detection repository under processor/handler.py. Note the bare minimum you would need to capture the file create event is the following:

We are now at the point where we can flesh out the implementation details surrounding our video files splitting to wav files. I've split up this step into 4 distinct phases shown below.

To start with we must define some static variables which can be extracted from the file & folder names of the incoming video items. This information is things like timestamp, device ID and the size of the segments (audio clips) that we'd like to split.

The fragments are now converted into 5 second chunks, so they need to be re-uploaded to S3 for use when performing inference in the Machine learning step.

The final step is to send an Amazon SQS message containing all the information about the video file task that needs to be processed.

We will also need to define a couple resources to be created such as the SQS queue and DynamoDB table. Luckily we're able to do this right inside the same serverless.yml file we've been working with so far. In a resources block near the end of the file you can see I've defined a queue and a table like so

Likewise our IAM (permissions and roles) can also be defined under the provider block. Notice that I've defined read/write access to an S3 bucket; this is the same bucket we're catching S3 events from and basically allows us to pull the video files and write the processed WAV files back.

NOTE: Refer to the completed serverless.yml file in the repository before deploying as it contains some other minor changes

We should now be ready to deploy the Lambda function using the serverless commands shown below:

And that is more or less it on the Serverless processing side! We've can now move onto the next step in processing we're going to cover which is receiving SQS items and posting results to DynamoDB & CloudWatch Metrics

With the events ships to SQS, the code we wrote in part one of this tutorial Dog Bark Detector - Machine Learning Model takes over and performs inference on each WAV file from S3.

Each message is first extracted from a batch of SQS items and split into variables for ease of use.

Then each WAV file is downloaded from S3 and processed using the prediction algorithm we wrote in the first post.

NOTE: The reason for CloudWatch Metrics is so we're able to easily graph trends over time without having to write any time series logic. This is particularly handy when prototyping.

This concludes the second part of this guide where we've achieved our goal of creating the backend for our Dog Bark detector. We've implemented an FFMPEG Lambda layer using Serverless framework; along with creating a DynamoDB instance and SQS queues for processing WAV clips. If you enjoyed this guide and would like to continue along building out this solution, check out the next guides in the series:

If you have any questions or want to show off how you might have tweaked this project; please hit me up on Twitter @nathangloverAUS