I have always developed under Linux but I recently decided to leverage my Windows laptop for my coding projects. I do occasionally game and use graphic applications so I did not really want to move to Linux and I was super lazy to partition the hard drive. Moreover lots of tools for sensors or robots are developed for Windows only and it's often inconvenient to switch back and forth.

I decided to give a try to the new Windows WSL feature. For those who don't know, WSL is a Windows feature which allows you to have a running Linux image in your Windows Desktop. Yes you heard correctly! No more need to partition your drive!
In this article I will go through how I set up my old laptop to run some cool robotics simulation. 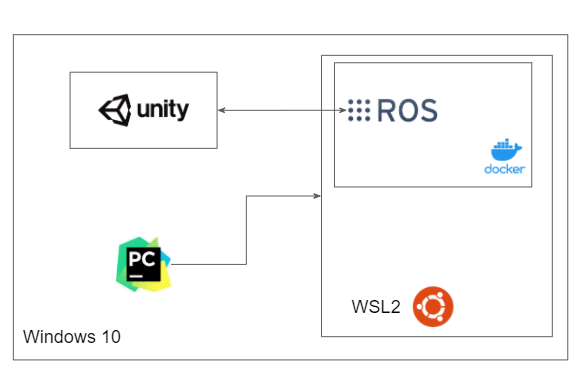 Let's dive right into it!

Setup WSL (the right one!)

WSL is under quite some development and there are actually 2 versions around. The latest version WLS2 has much better support for GPU hardware and docker than its predecessor. To install WSL2 you need to have a developer preview of Windows which you can conveniently install from your Windows Update. After joining https://insider.windows.com/en-us/getting-started and updating your Windows to the latest build, follow the steps below
https://docs.microsoft.com/en-us/windows/wsl/install-win10
Once done, choose your Linux distribution and set it up the way you like. I chose Ubuntu 20.4.

Finalize by setting up your display in WSL2. Add this to your ~/.bashrc

Note: In reality, I had a pretty hard time updating my outdated Windows version to the latest build. Updates kept on failing with weird reasons and I had to manually turn off several services for some updates to be installed. Good luck!

For the sake of this demo, having a working GPU is not necessary, however, if you have one, I strongly encourage you to setup your WSL system to use it so you will be ready to move your robot to the deep learning world. If you do not have a GPU skip to the Docker Only section.

Note: when installing Docker, use the same hard drive of the WSL installation or you will notice an extremely slow Docker building or running.

To setup GPU support for WSL2 follow the instructions as reported from the NVIDIA official page. https://docs.nvidia.com/cuda/wsl-user-guide/index.html. This guide will first help you to setup WSL2 for your CUDA drivers and then help you setup your Docker installation with CUDA support. You can stop at Simple CUDA Containers.

After the installation, if you are having troubles with permissions, make sure you set them up properly. Usually you have missed running this command

Docker Only (No GPU)

If you do not have a GPU I strongly recommend you to install Docker Desktop as it's very simple and can be done directly from Windows with a couple of clicks. https://docs.docker.com/docker-for-windows/install/

While setting up the rest of this tutorial I had lots of WTF moments which I listed below.

WSL2 and Windows time will easily drift causing both systems to have different time. Some people experienced high discrepancies, however, I had only few seconds difference. Nonetheless, those few seconds were enough to cause ROS to reject the messages incoming from Unity. To fix the issue I have setup a continuous sync in WSL2.

We will go ahead and let WSL2 sync from Windows time each 10 minutes.

Then add the following line

WSL2 does not support system.d or any sort of service start. Among many different ways, I have chosen the simplest one to make it happen (https://www.how2shout.com/linux/how-to-start-wsl-services-automatically-on-ubuntu-with-windows-10-startup/)

Add the following lines to your /etc/sudoers file

It will open a folder. Inside it, create a file wslservices.bat with this content

You can add other services if required.

You are now setup to work with WSL2 and do software development using the convenience of Linux while keeping your Windows system running! I have used this setup for other projects related to deep learning and it's extremely convenient if you like me don't like swapping OS often.

Continue to Part II where we will setup our demo to use Unity and ROS over WSL2 and Docker.

Plane Detection with ARCore and Unity

[Unity] A solution if you can't receive the event that finishes an app on mobile.

Once suspended, szandara will not be able to comment or publish posts until their suspension is removed.

Once unsuspended, szandara will be able to comment and publish posts again.

Once unpublished, all posts by szandara will become hidden and only accessible to themselves.

If szandara is not suspended, they can still re-publish their posts from their dashboard.