How many should be teaching people how to succeed instead of just succeeding in their own way?

As independent creators carve out a new career path for themselves, I suspect that some are unintentionally picking a path that limits their growth and robs the world of their true potential.

This theory was triggered by this Hunter Walk tweet: 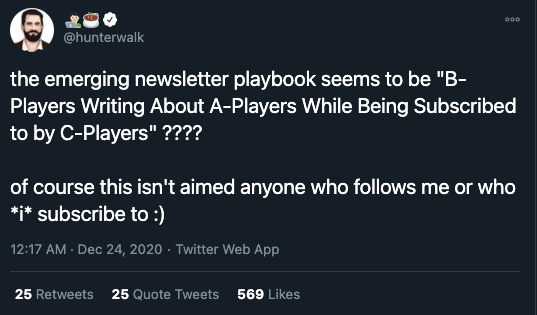 The message is clear: By doing B player things, you are at least doing better than C players. But you will never be an A player using the B player playbook.

Is that a tradeoff you are consciously making?

Of course it is too reductive to reduce pluripotent people to "A players" and "B players". You can be both in different domains, or transition from one to the other. And of course this is nowhere near as bad as the real-life "glass ceiling" or a "bamboo ceiling" in normal careers, where a certain set of the workforce is unable to progress by sheer fact of who they are. That is obviously despicable and is a far more important societal issue.

But the meta-creator ceiling is interesting to me because it is a path that new creators follow by choice, yet without being aware of it's limitations because nobody is incentivized to warn them. Perhaps because it is an easier game than others, or perhaps because of hype and marketing.

No judgment — I of all people know that there are many ways to avoid asking what it is I really want to do with my life.

Perhaps some definitions are in order: A "Meta-Creator" is someone who creates content about creating, instead of just creating.

The temptation toward being a Meta-Creator is extremely high. There are three paths:

To be extremely clear: You can be enormously successful and happy being a Meta-Creator, and bring success and happiness to millions, and that is no small feat. I enjoy Tim Ferris' podcasts and Tren Griffin's blogposts. No judgment if that's your thing. The economics make sense too — in a gold rush, go mine a bit of gold, then sell copies of the shovel you used because it is now "proven" to work. Just don't spend too long thinking about who arranged those economics in the first place.

But, one, you may have a lower chance of success pursuing this path than others, because it is both available to everyone and zero-sum.

But I write for reason two: the sneaking suspicion that even if you win and are top of the heap at the Meta-Creator game, you are still limiting yourself from what you could be doing with your life. What the people you actually look up to are doing with theirs. What the world could be benefiting from if the greatest minds of our generation just applied themselves to other problems than "How to Crush it on Twitter" or "Get a Million YouTube Subscribers" or the 3923rd "How Warren Buffett and Charlie Munger Think" blogpost. I promise you Musk or Bezos or Obama or Malala or whoever you look up to spend zero time as meta-creators.

Smart, capable people like you and I can often approach life with more ambition than direction. We want success more than we want to solve problems. I think the way to approach the question of "what do I do to be successful", may be to flip it on its head:

Assume you will be successful at whatever game you play. Are you playing a game you want to win?

How to Create Customizable WebAR Experiences

A Simple Bluetooth Keyboard Can Boost Your Productivity by 40%