In Part 1 we journeyed from a simple websocket application to a quite advanced Kubernetes configuration.
The final architecture looks like the following diagram.

You may remember that one of the key point in the whole multi-server pattern was leveraging an element which acts as Reverse Proxy.
In the case of Docker configuration we defined a service in docker-compose, whereas in Kubernetes it was easier to employ a simple Service Resource, in that case exposed as a NodePort.

It would be nice to have a solution that is suitable for both cases maybe reusing some configurations.
Moreover Kubernetes may require even more attention since resources can be rescheduled quite often, so the configuration should be flexible enough to keep up with this dynamic pattern.

Traefik: one service addressing many issues

Traefik is an open-source Edge Router that makes publishing your services a fun and easy experience. It receives requests on behalf of your system and finds out which components are responsible for handling them.

Traefik has a multipurpose structure, hence it can be employed as a standalone service but, thanks to the concepts of Providers, it works smoothly either in a fully Docker environment or as a Kubernetes resource, likely with many others third party.

The above image explain the basic blocks of Traefik:

Tip: take a moment to understand basic concepts and different kind and blocks of configuration in Traefik, you will become immediately friends. Otherwise it may happen that it gives you hard time. That's part of the game, deal with it at the end you will cope and win together.

Traefik is now at version 2.2. and it comes batteries included! Indeed out-of-the-box you can leverage its Dashboard that provides usage statistics but above all a visual overview of the setup configured. 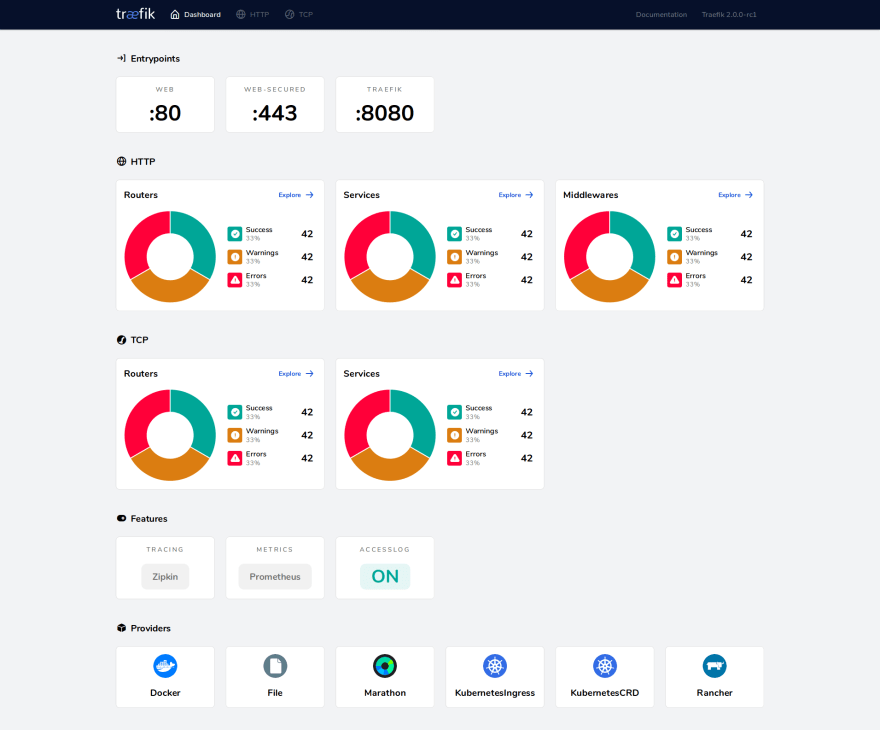 This is particularly useful when you'll need to troubleshoot your configuration, since you may visually find which component is not correctly working or whether a dynamic configuration is not actively recognizing the expected element.

Traefik can have either a static or a dynamic configuration. Most of the option blocks in the static configuration are available seamlessly in the dynamic one.

In a static configuration the Traefik elements are defined at startup and they are not expect to change over time.
The configuration can be defined either as:

What is more interesting is dynamic configuration. This can change and is seamlessly hot-reloaded, without any request interruption or connection loss. Depending on the provider Traefik will listen and adapt to any change in configuration.

Static and dynamic configurations can be mixed and work together without any problem. It is quite common to launch Traefik CLI with some options and then allow dynamic parts to complete the configuration. Indeed you will usually declare the provider (e.g. Kubernetes, Docker, File) in Traefik CLI and then leave all the rest of configuration as dynamic, using different patterns, according to each specific provider:

Going back to what explained at the beginning, this philosopy is particularly useful:

Tip: Traefik has a vast and deep documentation. Many examples are included, most of the time they are referred with multiple providers variant. Sometimes only in the File Provider fashion. Since you will likely employ another provider, don't be scared, the transition from File provider to others is simple enough.

One of the key feature of Traefik is its ability to natively handle HTTPS traffic and TLS connections. Traefik can handle very easily HTTP to HTTPS redirection and TLS certificates support. The latter include a very powerful management of certificates through Let's Encrypt (ACME), which is able to generate and renew ACME certificates by itself.

This part is out of the scope of this post but it is a fundamental feature when you will deploy Traefik in production.

Traefik can be defined as a single service in a docker-compose file.

Interested services will be dynamically configured and reachable using the concept of Docker Labels. This list of labels will keep all the definitions allowing Traefik to discover the involved services.

Tip: If any sort of troubleshooting is needed enable access logging and debug level detail by adding these options to Traefik CLI service:

The new stack will swap HAProxy service (or any other Reverse Proxy) with a Traefik container, whose CLI will declare any static configuration part.

As you see the key part is mapping Docker Daemon entry point for Docker APIs into Traefik, hence it will be able to listen to any configuration change in the stack.

All the necessary configuration parts will be dynamic and left to the Docker Provider. They will placed in the websocket application service as label items of the service configuration:

Note: in this configuration I added another step of complexity. We expect the websocket application to be exposed at the /wsk path instead of root path. This will allow us to see the middleware components of Traefik in action.

The middleware defined is dynamically associated with the router by a list of formatted strings with the convention <middleware_name>@<provider_name>.

Note: the names of router (socket-router), service (service01) and middleware (socket-replaceprefix) do not follow any convention and are absolutely up to you.

At this point you just need to launch the stack again, with:

Then check out the Traefik Dashboard exposed by default at http://localhost:8080 and if no errors are shown, get your websocket client ready to connect.
Don't forget to tune its configuration: now to reach the websocket service, the client will contact directly Traefik, which in turn is now exposing the service at path /wsk.

And the magic should happen! The communication among clients and websocket services keeps on working smoothly!

Dynamic configuration of Traefik in Kubernetes may act as an Ingress resource: an entrypoint to a specific service, that can be bound to a domain name and port. In version 2.2 Traefik improved its terminology and added the KubernetesCRD Provider, hence the state of the art is actually defining an Ingress Route through a Kubernetes CRD (Custom Resource Definition).

Here is the new architecture introducing Traefik as first point of access into the cluster: 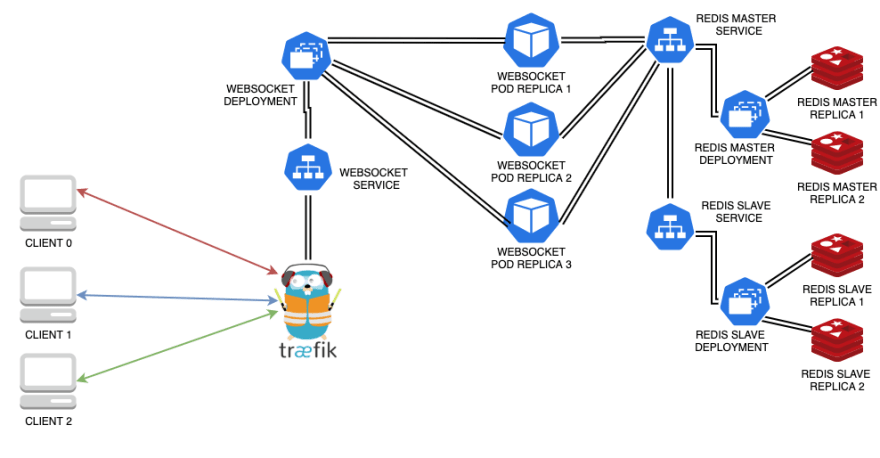 In this environment Traefik requires the definition of the following resources:

The previous configuration define an IngressRoute related to the entrypoint web (which was defined above in Traefik deployment), and a rule which match everything having that PathPrefix to a specific Kubernetes service resource.

Tip: whether your service will have access from a predefined domain name, the router match rules will be similar to:

In the first Kubernetes configuration we used to expose the websocket service as NodePort. Introducing Traefik we don't need to expose the previous service anymore, since the task of exposing services outside the cluster will be in charge to Traefik service itself.

The NodePort part should be removed from websocket service resource. The service won't need to be exposed in any way, it will simply look like that:

Then we will transfer the access to our cluster to Traefik service. For sake of simplicity I reused a NodePort form:

The configuration above will expose Traefik web entrypoint on port 30080 and Dashboard on port 30808.
When a client send a request through port 30080 (supposing on localhost), the latter will be forwarded to the entrypoint, then through the IngressRoute custom resource, which in turn, according to router rules, will allow the request to be received by the corresponding service. Finally the service response will be forwarded back through the same path and back to the client outside the cluster.

Now we are ready to launch K8s new resources. First off all let's define the new CRD, then we launch Traefik resources and finally we may redeploy websocket service (supposing it has been already scheduled).

Middlewares are a key concept in Traefik as they add very powerful manipulation possibilities to incoming requests. There is a long list of natively available ones in the official doc.

As for the Docker configuration also for Kubernetes we may expose our websocket service at path /wsk. Respect to the previous configuration, this shift requires only a slight change by:

The final result is the following:

As you may notice the previous steps are basically the same required while we performed this exact change in Docker configuration above.

Socket.io by default will expose the default websocket endpoint adding a /socket.io suffix at the end. This is quite strange when you start reaching your websocket in a complex environment.

The solution is fixing the path of the websocket in the application.

In this part we introduced Traefik which is an impressive tool. It is powerful and straightforward to configure.
However you know that from great power comes great responsibility, so my suggestion is to:

Otherwise you will end up trying again and again to adjust your configuration, which will keep not working (that comes from a true story...mine).

If you have clear where you want to go, Traefik will be a good friend. As you may have noticed it solved both the use cases in Docker and Kubernetes in one-shot. Amazing!

Adding A Database to Your Application Using Okteto Stacks

Setup Go with VSCode in Docker and Air for debugging

Sergio Matone
Cloud infrastracture architect
What a trip the "Traefik Autumn Edition": true memories from a Traefik Ambassador
#kubernetes #traefik #cncf #go
Scaling Websockets in the Cloud (Part 1). From Socket.io and Redis to a distributed architecture with Docker and Kubernetes
#docker #kubernetes #websockets #redis
Forem Open with the Forem app