Have you ever played an online spin to win game? You know! The one that pops up as an Ad with the message “Spin this to win the latest, feature-rich Samsung smartphone!”? I did. Because who doesn’t want the latest smartphone for free? Sadly, no matter how many times I played, I didn’t win. Never the less, I was rewarded. Rewarded with the curiosity to know how this deceitful game worked. With a quick google search, I found that it worked by using a random number generator (RNG). It’s probably Math.random()

But… How does a computer, a device that is designed to work as per the instructions given by a human generate random numbers? Answer, it doesn’t. And it can’t. That is why it’s called a “pseudo” random number generator (PRNG). It means it’s a fake. It’s a knock-off.

A True RNG needs additional hardware that can use real-world random phenomena from throwing dice 🎲 to measuring radiation from a radioactive material as an input to generate random numbers. Wow! Using the randomness in radioactive decay just to generate a number is mind-blowing! 🤯 Take a moment to let that sink in.

But this additional hardware is costly and who would willingly carry a radioactive material in their pockets except for Lex Luthor? That is why everyone agreed to settle with a PRNG. 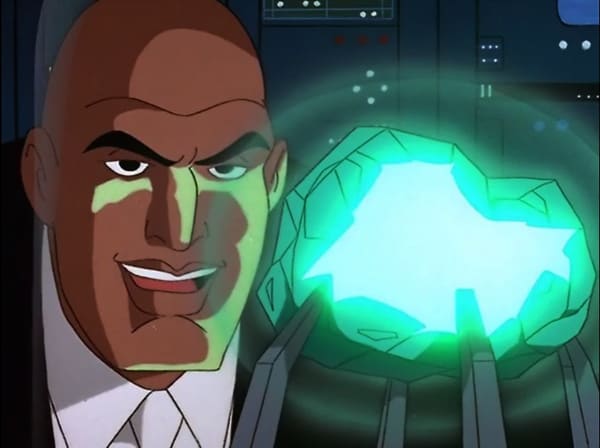 PRNG is not a single standard algorithm used everywhere. I was struck dumb when I found out that there are not 1, not 2 but 28 different algorithms created by very smart people over the past 7 decades.

Let me show you 3 amazing ways to replace Math.random() in Javascript.

How do they work?

Though I couldn’t research all the 28 algorithms in a short time, I looked up 3 good ones. I first thought they used complex mathematical derivatives involving 100s of lines of code. Nope! I was wrong. With 2 to 5 lines of code involving basic arithmetic operations, they’re unbelievably simple. This makes it easier for beginners to understand.

All 3 algorithms and PRNGs, in general, followed these common steps 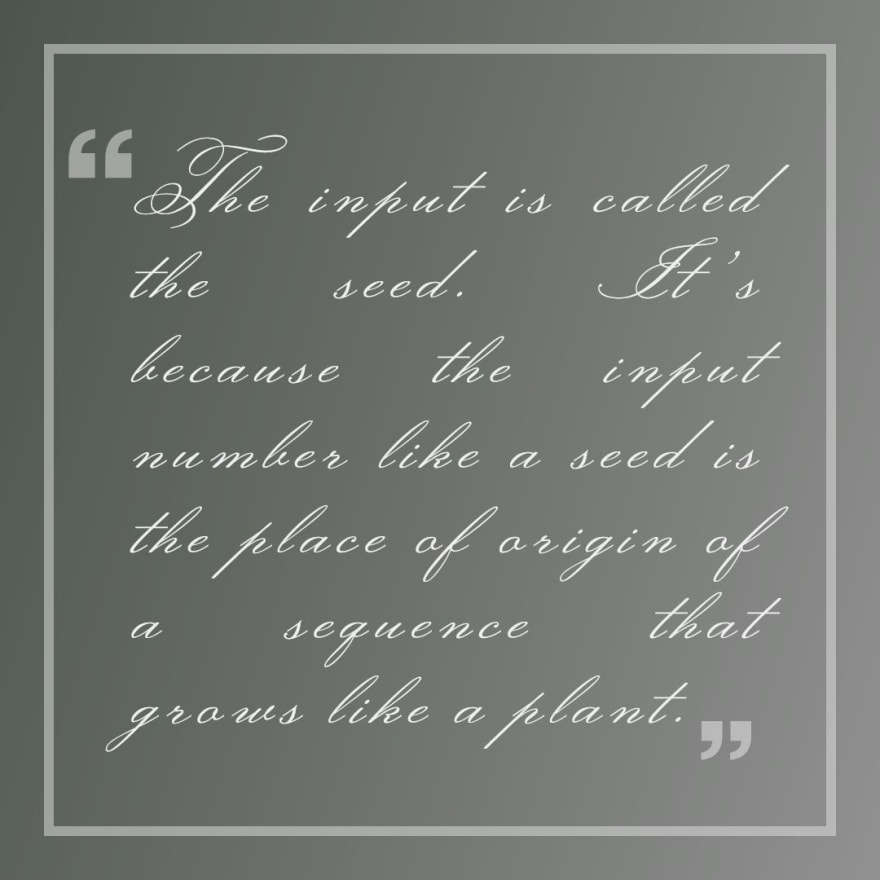 An unique property that separates PRNGs from true RNGs is that the sequences generated by PRNGs inevitably repeat themselves at one point of time. 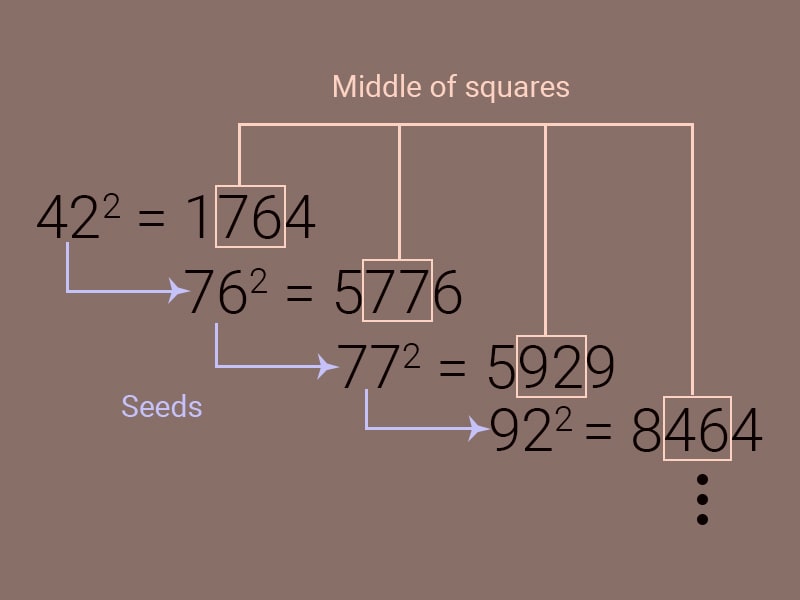 The simple nature of the algorithm is used as an exercise for beginner programmers to check their knowledge in the language they learned in Bootcamp. So, here’s my implementation in JS to help them.

There is a problem with this approach. There are exceptional numbers whose square value have odd digits which makes it difficult to extract the middle digits like in the case of 15. Squaring 15 would result in 225. And we cannot accept 2 as the middle number since we need two digits. To solve this, we pad zeroes in front of the square value to make it even digits. Now 225 becomes 0225 which makes it easy to extract the middle 2 digits which is 22. After rectifying the problem, the code looks like this.

With just three lines of code, we could generate a maximum of 8n numbers for an n-digit number after which the sequence repeats itself. There is a pitfall though. Some seeds can cause the algorithm to have a shorter cycle like the seed 25, which causes the algorithm to repeat 25 indefinitely.

This fascinating algorithm uses more math than MSM. The LCG uses a linear equation that involves congruence operation for the generation of a random sequence of numbers. “Whoa! What’s all these fancy terms?” I can hear you exclaiming. Let me explain.

Linear means an algebraic equation that has no variables raised to the power greater than one.

With its jargons, the algorithm might seem sophisticated. But, it’s very simple to understand as it uses very basic algebra and arithmetic operations. It uses this particular equation Xn+1 = (aXn + c) mod m. Alright! Alright! No more math terms. I’ll translate it to programmer readable from. The translated equation is, X = (a * X + c) % m

Where X is the seed. Akin to the MSM the result is used as the seed for the next cycle.

a – is the multiplier

c – is the increment and

m – is the modulus

It has the following conditions

Since this is a simple equation, solving this is a piece of cake for computers. In the case of the MSM, data conversion from number to string and back to number is required, which are heavy on the CPU. For this reason, LCG is the oldest and best-known random number generator algorithm [2]. And hence takes 2nd in the list.

After all, both the increment and the seed can take the value zero care should be taken that both do not take zero or else it just spits out a sequence of zeroes.

Here’s how I wrote the LCG in JS

It takes just two lines. Just two! I did a double-take after writing it 😲. It’s really incredible to see a simple equation to achieve something this big. This just increased my respect for Math.

Please bear with me. This one uses a lot of computer science terms. I chose this one because I thought I would never get to use those binary operators in my life just like how I thought I could never see Ash Ketchum win the Pokémon league championship. 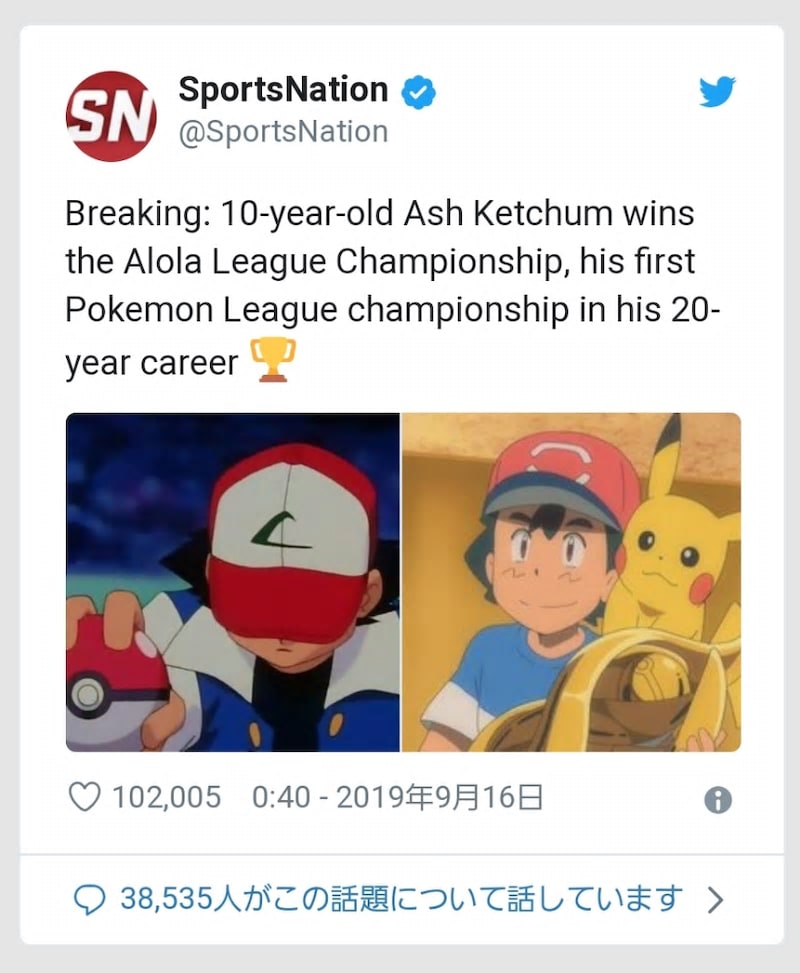 Let me break down the algorithm. Bit shifting works by shifting the bits in the binary number either to the left or right. The result is a completely different number. For 1-bit shift to left, each bit is shifted one place to the left. The empty space is filled with 0 and the shifted out bit is discarded. And for a 5-bit shift to the left, single-bit shift operation is repeated 5 times. Here is an example: 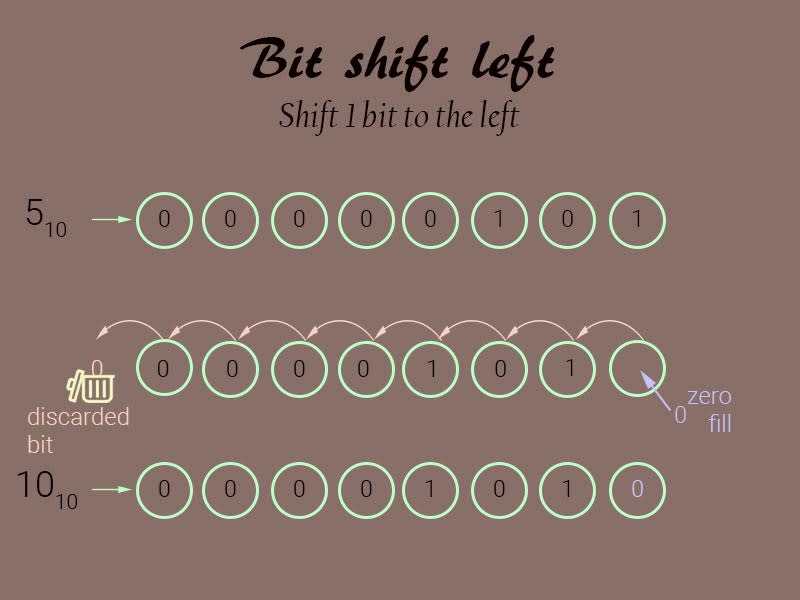 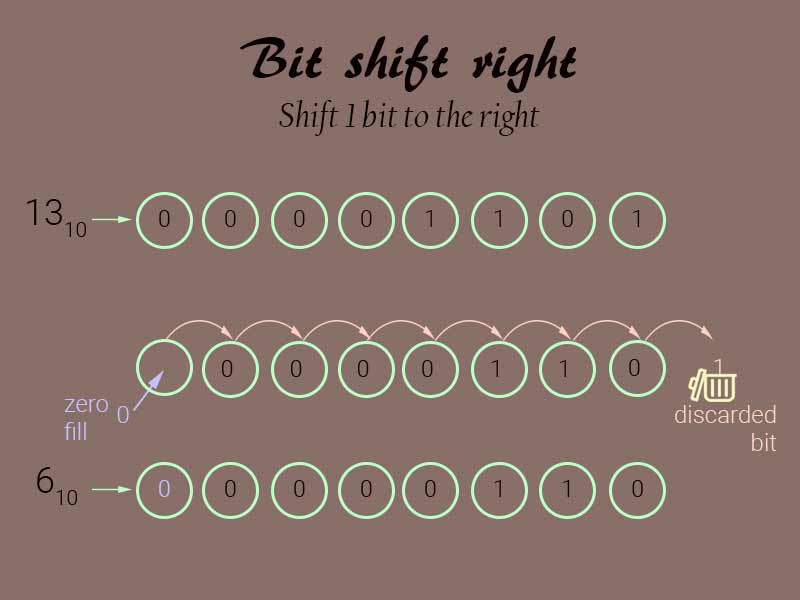 The bit shift operation, as you can see, requires only one operand and the result is a completely different number. On the other hand, the Xor operation requires two operands. XOR short for Exclusive OR operation compares the bits of two binary numbers and sets the bit of the result to 1 only when one of the bits in comparison is 1. Continuing with the previous example the Xor of 42 and 2524 takes place like this: 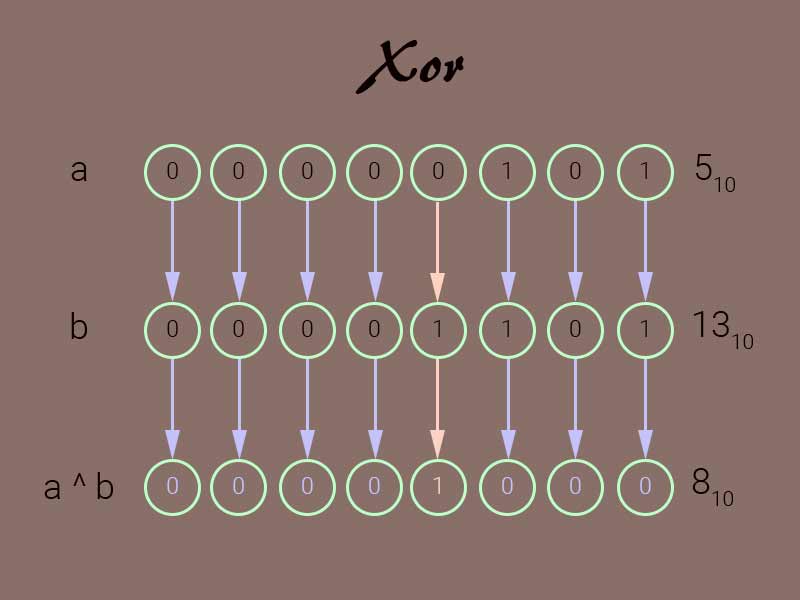 Representation of xor operation in a 8 bit system

Xor also results in a different number. This algorithm combines the power of these two operations. And, here is my implementation of Xorshift in JavaScript.

This method performs consecutive bits shifts and Xor operations on the seed which creates a random sequence containing both positive and negative numbers. The constants 13, 17 and 5 in the algorithm is from the list of triplets suggested in the paper describing the Xor-shift algorithm 4. This algorithm works directly in binary, the language of the computers, which makes it faster than the LCG.

If you want only positive numbers, you can take the 2’s complement of the seed if it’s negative before returning the value. This can reduce the performance with the inclusion of a condition.

Computers store the positive and negative numbers (called signed integers) as binary numbers in 2’s compliment from. The leftmost bit (the most significant bit) is reserved to represent the sign of the number. 0 represents a positive (+) sign and 1 stands for negative (-) sign.

Do you know what a two’s complement is? Don’t worry I’ll explain.

Thus, in our algorithm, we always end up with positive numbers.

This article is just the tip of the iceberg in the rabbit hole of PRNGs. I wanted to share you the different ways to replace Math.random(). All these samples give out whole numbers which is the complete opposite of Math.random(). Math.random() spits out random decimal numbers only between 0 and 1. I’ll leave the conversion as an exercise to you. You can use ES5 features like generator functions to implement these. If someone does that, please post it in the comments.