What is Azure Service Bus?

At the time of this webinar, there were three basic concepts in Azure Service Bus:

In this environment, we can create a namespace which would be the container for our Service Bus artifacts in the cloud. The namespace can be available in different regions.

Each namespace comprises messaging entities like Queues, Relays or Topics. Most importantly, a namespace will be dedicated only to one type of Service Bus.

Message processing statistics (as of 2015)

The statistics generated by the Microsoft team working on Service Bus are as follows,

It can handle a colossal number of messages in a very executable manner.

In Service Bus Relay, we will have an endpoint that will be hosted in the cloud, but the difference would be the fact that our on-premise service will make an outbound connection to register with the Service Bus relay endpoint.

At a conceptual level, we send a message to an endpoint in the cloud from where it will be forwarded to an on-premise service. As a result, it gives us the advantage to connect from one organization to another organization without having to set VPNs.

Some of the key features are,

Service Bus Relay can be used to solve problems in scenarios like,

This demo explains the process of hybrid connectivity with Service Bus Relay. We would initially work on a WCF service (on-premise service). The demo constructed on a .NET framework with console application is to call the back-end service.

In Service Bus Explorer, we will have a registered endpoint under the “relay” section. Now, a virtual directory (router) will be linked to the configuration file “web” under user defined location to establish a connection. The folder would also comprise of two more files, which are,

In the SVC file, there would be service pointing to WCF routing service endpoint. In the configuration file, there would a WCF service which uses the HTTP relay binding along with other credentials to access the Service Bus Relay.

Finally, Service Bus Relay accepts a message and forwards it to the back-end service. When executed on the console application, every message will be processed within a time frame of 100 milliseconds.

In Azure Service Bus, We can transfer the data between services or applications in message format like XML, JSON, or text.

In this messaging protocol, Microsoft would handle most of the scaling. We just have to create a namespace using platforms like Azure Portal, Service Bus Explorer or Serverless360.

Let us consider some example scenarios,

A messaging protocol based on the first-in-first-out pattern. Here a sender would send a message to a queue from where the receiver would collect it in initial or later stage. Besides that, queues enable us to store the message until the receiver is available to receive and also process them. The user will receive the message upon request.

Topics are similar to queues. Most importantly, topics make multiple subscriptions available. A sender will send a message to a topic then a routing rule can determine which subscription may receive the slotted copy of the message.

Other messaging patterns include,

In this demo, we will send a message to a queue and also collect it back. Initially, a queue (testqueue) will be specified and also the following properties will be determined in Service Bus Explorer as mentioned below,

To send a message to a queue and also to collect it back, we define the Service Bus connection string along with reference to Service Bus NuGet package.

We will now create a Service Bus message and sent it. On receiving side, we have a competing consumer pattern which enables multiple concurrent consumers to process messages received on the messaging channel. Dynamic message delivery method is employed in a single-thread pattern i.e., first-in-first-out. But in multi-threading pattern, messages will be processed at a higher throughput for multiple receivers.

On receiving side, using “OnMessagingOption” we can specify the number of concurrent receivers required,

We will then access the body of the message through the event (OnMessage) and also write it to the console window.

The message can either be removed from the queue or abandoned. Service Bus handles serialization with the help of SDK’s.

Let us consider, when we send a message it would be processed in a loop format. So, we will take the .NET type specified as “TestMessage” and also moves it to “BrokeredMessage” to handle the serialization of the .NET type when passed to the queue.

Now if we run our demo on two separate console applications, one to send and also another to receive. The respective messages would be sent and also received from the queue. 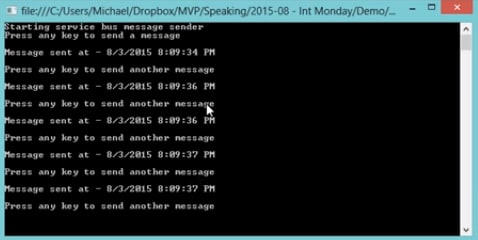 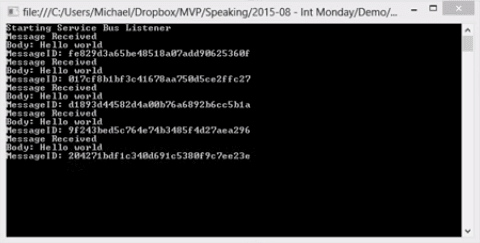 Event hubs will manage massive scale event stream processing and are similar to Service Bus messaging. It is similar in the case that it supports sending the message over AMQP (Advanced Message Queuing Protocol).

The key difference between Event Hubs and also Service Bus messaging is that there is no concept of deleting a peek lock message like in Service Bus. Instead, Microsoft has used a reader across a stream which provides a high level of scaling.

Let us consider an IOT scenario where Event Hub comes in use, 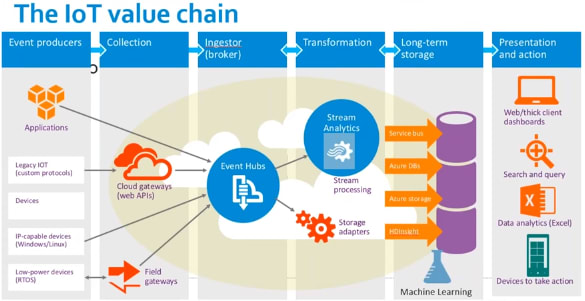 The above picture comprises many subsystems, each with an individual offering. Event Hub can stream a high volume of data from different applications and also store it.

Most importantly, users can process the streamed data and apply it for their individual purpose.

Let us consider some example scenarios:

In Event Hub, multiple senders store their telemetry data in the message stream. A receiver cannot remove the message from the stream. Rather, they only get deleted when their retention period gets over. A consumer group can access message from any stream. 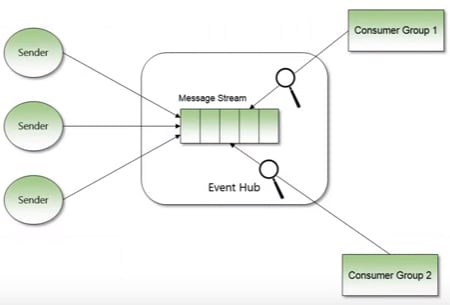 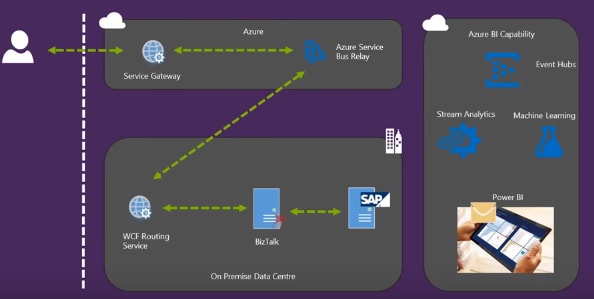 The above picture represents a typical message flow of a system. The idea is to feed telemetry data to Power BI through Event Hub. Message from the user would pass through various systems and also would reach Event Hub.

Here, Stream Analytics and Machine learning process collect the data from Event Hub and send it to Power BI for any business analytics service.

This demo illustrates the purpose of Event Hub and is similar to Azure Service Bus messaging.

In the console application, we have a connection string followed by an Event Hub name (key name). In the code portion, we have 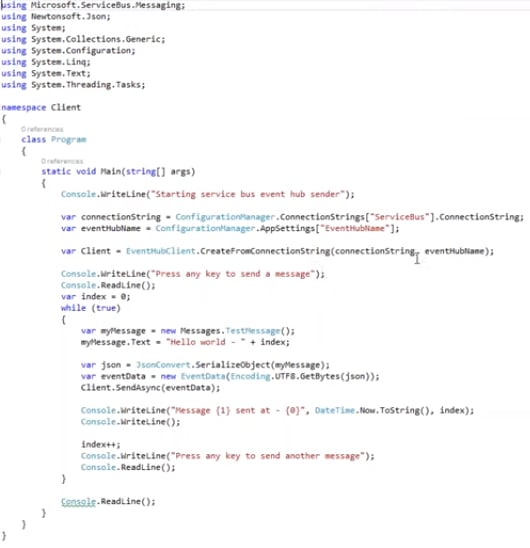 In the console application, we have an “EventHubName” and also storage account followed by a ServiceBus.EventProcessorHost which is used to create a listener for different partitions in the Event Hub instance. In the Azure storage account, this package creates a blob for each partition to manage the index of its location in the stream.

When a message is received, it will be fired to the event listed in the below piece of code, 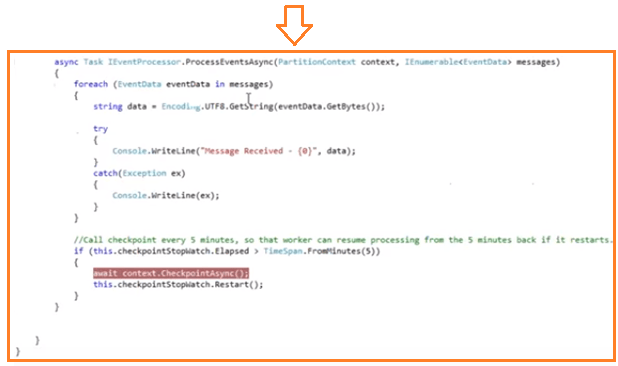 Our position in the stream can also be acknowledged so if the whole process blew up, we can simply move to the last index we read and also continue our progress. Now, we can see how the operation gets executed. As a result, Event Hub can receive and store any kind of data and events.

Service Bus team provided a cost estimation analysis for processing a billion events per day which lead to,

Although Service Bus and BizTalk provide connectivity in many aspects for a seamless experience, they could be more aligned in the following aspects; 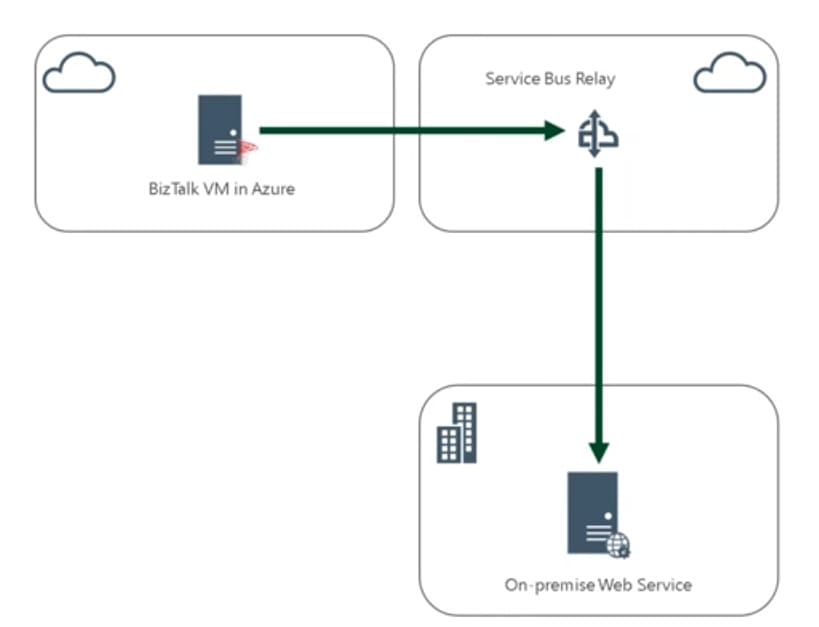 Let us consider a BizTalk server hosted in Azure as a Virtual Machine needs to connect to an on-premise web service. The simplest method to do that would be through SB adapter in BizTalk.

Here, BizTalk Server will send a message to Relay and the rest of the process will be carried out in WCF service. 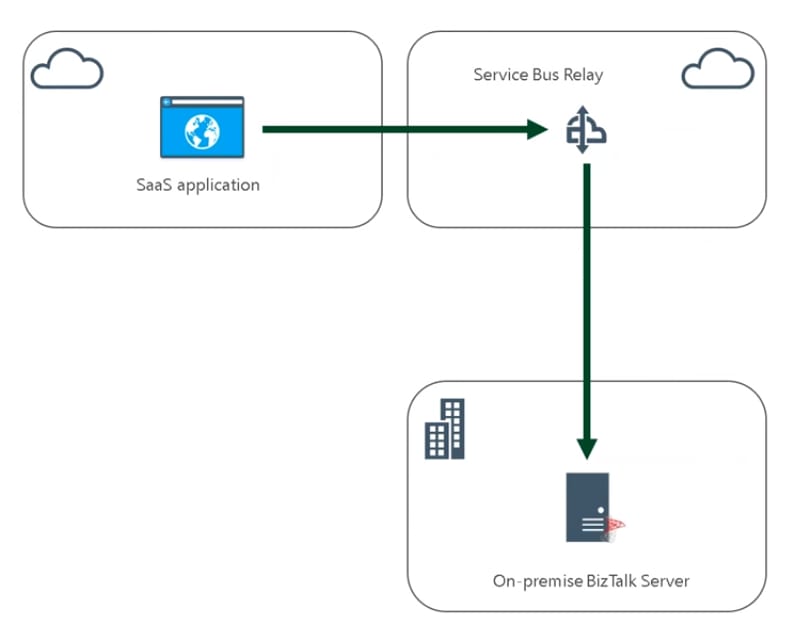 If we have BizTalk server on-premise followed by a SaaS application in the cloud, a communication can be established between them through Service Bus Relay.

This can be achieved through Service Bus Relay or by assigning a REST API between SaaS component and the server. So, the Relay offers an easy way to expose a BizTalk endpoint from an organization. 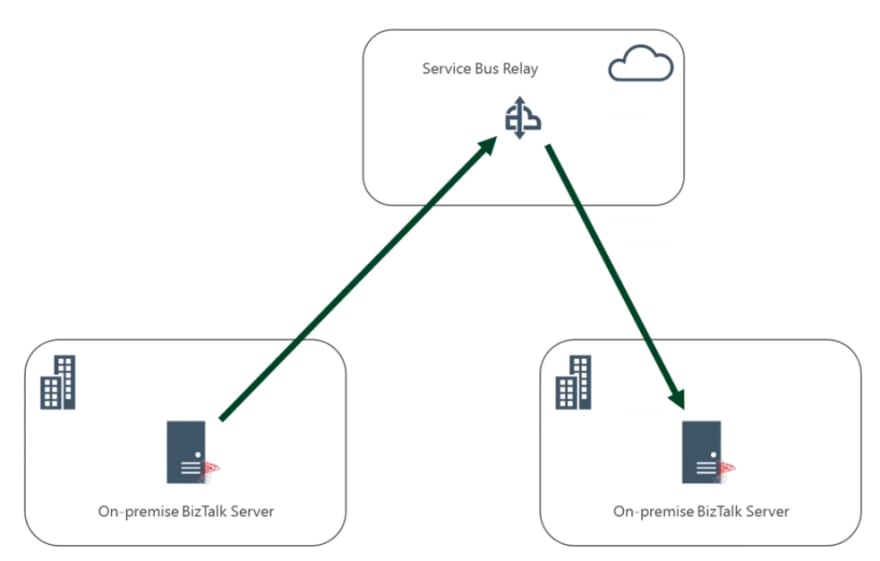 Let us consider the scenario where two BizTalk Servers in separate companies needs to communicate. The best way to do that will be to send the message through Relay by exposing their endpoints. This flow does not require any separate infrastructure support. 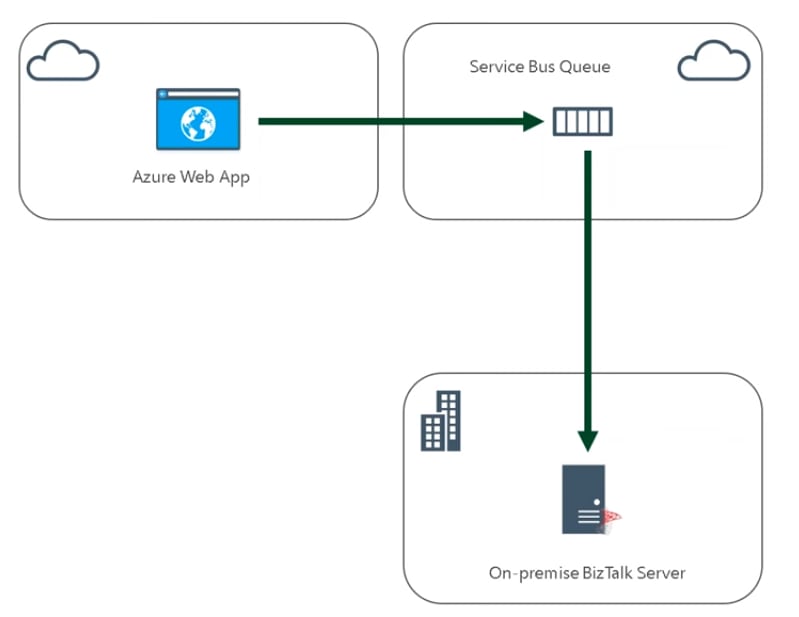 This scenario would focus more on transferring a massive number of messages from a web application in the cloud to on-premise Server. Here, BizTalk Server pulls the messages from the queue at a manageable level. 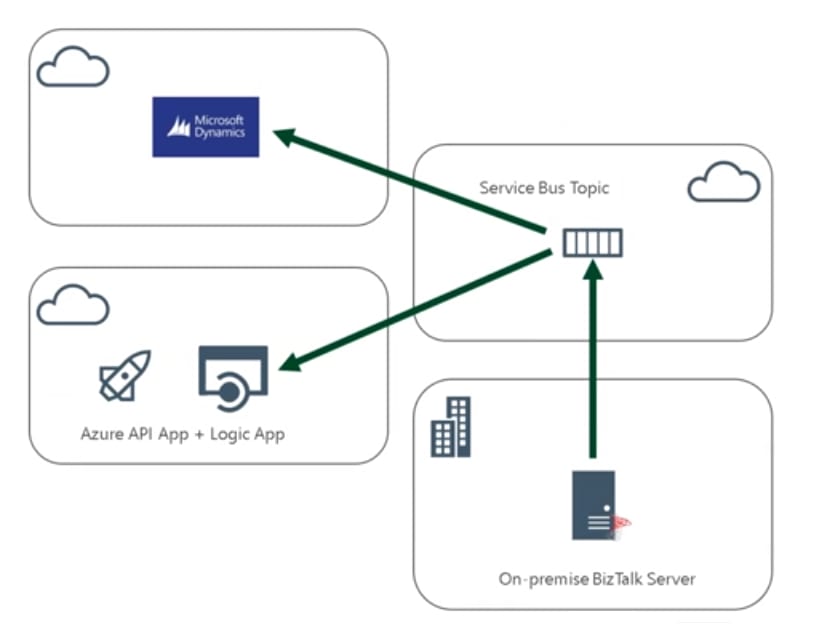 To publish an event in pub/sub format to various receivers, we will push the message from on-premise server to a queue where the application can access it. You cannot directly link the applications to the BizTalk Server located on-premise.

The key difference between Service Bus and BizTalk is that,

Therefore, combining both the services would lead to dynamic productivity. The receiver can access the message available on Service Bus Topic at any time. 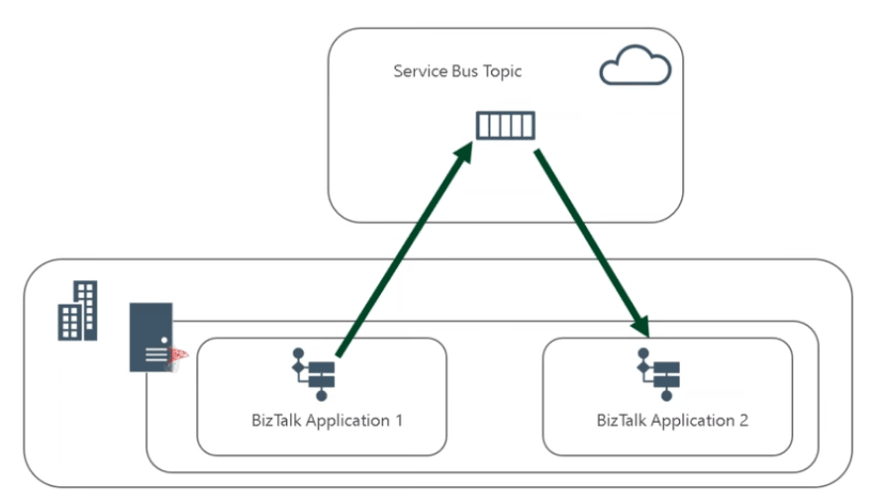 Let us consider a scenario where Service Bus Topic will share the resource between two BizTalk application. But if we want to delete the shared resource in the application and patch a new resource, the dependency management in BizTalk would make it harder.

When the BizTalk application has to be updated, we cannot undeploy it because the subscriptions would be eliminated. Therefore, this causes overcomplexity when trying to solve it.

This demo explains on combining both BizTalk and Service Bus, through which messages can be sent and also received between BizTalk applications. Most importantly, you can execute the process in JSON format.

Let us assume there are three BizTalk applications (app1, app2, app3), each comprising of “Hello World” scheme followed by a unique namespace. We will have a sender in each application to receive a message from the file system, which will be routed to Service Bus through Send Ports. Furthermore, you can convert the messages to JSON format before sending it using JSON encoder.

Most importantly, when we receive the message in Service Bus, it would hit the topic comprising of two subscriptions. Each subscription will forward the content to the desired queue. The Topic can specify who can send and also receive the message in it, but if there are multiple receivers, there is a probability where one receiver may fetch the message of another receiver. Hence, this problem can be solved by using “Forward to” option in Topic and can also specify which receiver should receive the appropriate message.

Most importantly, the agenda is to send a message from any application to topics before it gets forward to the selected queues. 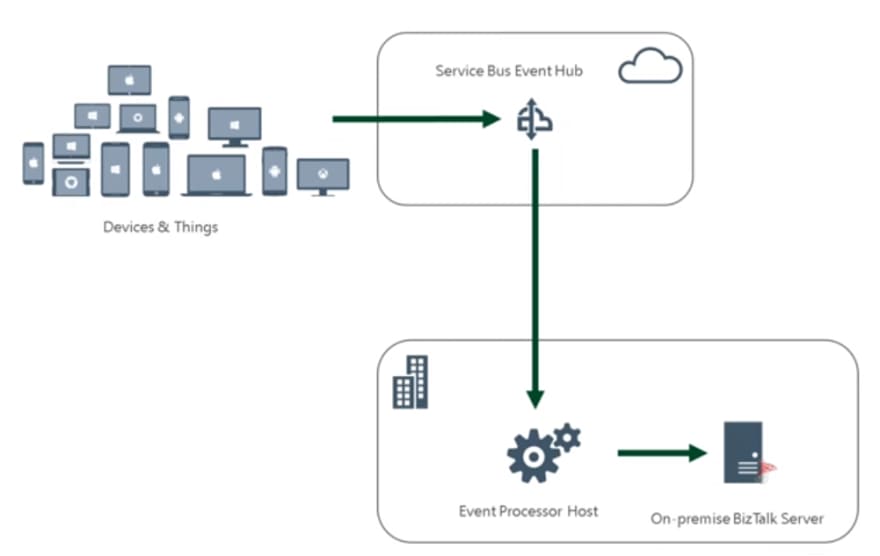 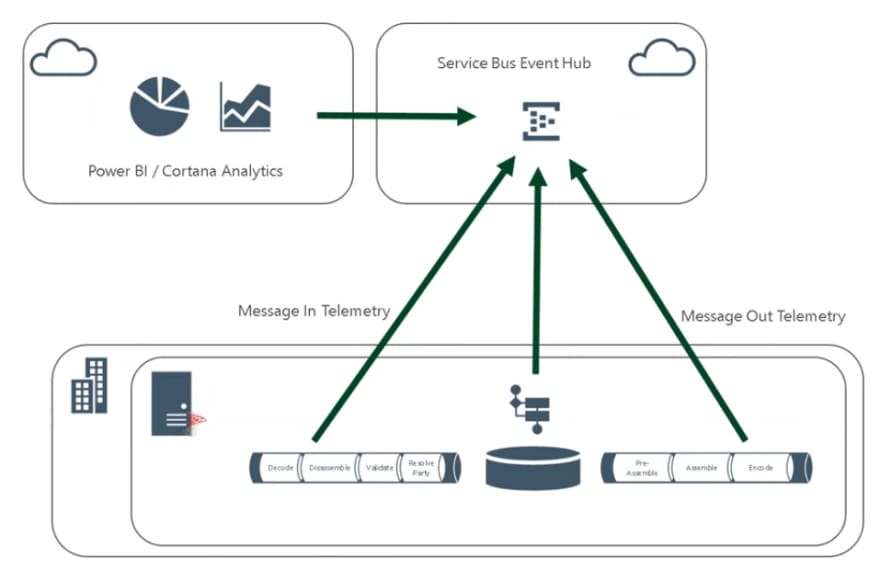 In this scenario, you share the telemetry data and logging information with Service Bus Event Hub when a message flows through the pipeline of BizTalk server. Most importantly, powerful analysis machines like Power BI and also Cortana Analytics make use of the telemetry data from Service Bus.

This blog gives an overview of various Service Bus components available with demo scenarios for a better understanding of the audience. There are a lot of features available in Azure Service Bus and also more to come soon.