This article is part of #ServerlessSeptember. You'll find other helpful articles, detailed tutorials, and videos in this all-things-serverless content collection. New articles are published every day — that's right, every day — from community members and cloud advocates in the month of September.

One of the advantages of Azure is that for some use cases you can develop solutions in the Azure Portal.  This has the benefits that you can just focus on writing some code and not have to worry about versions of Visual Studio and extensions and all of the other overheads which turn a few simple lines of code which can be written by anyone into something which requires an additional level of developer skills. Let’s face it the ALM processes have been around for years but there are still large portions of the developer community who don’t follow them.

This article explores the options for being able to develop an Azure Function in the portal but use some of the basic ALM type activities which would only be a minor overhead but gives some good practices so that developing in the portal would be ok in the real world.

The process I am going to follow is as follows:

To summarise the pipeline usage see below:

I am going to make a few assumptions:

In this simple example, we are assuming that everything is quite simple, and we can just update the code between environments.  In a future example, we will look at some more complex scenarios.

To begin the walk-through, let’s have a look at the code for our function below: 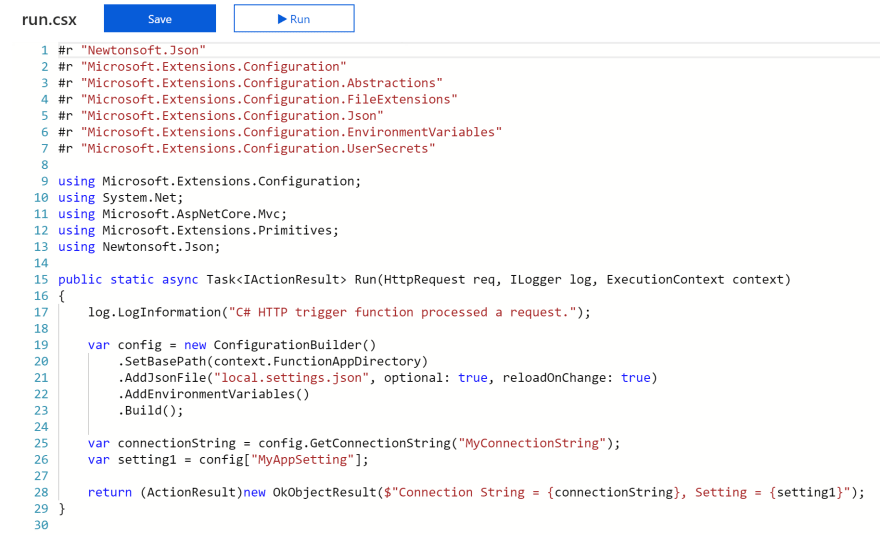 You can see this is a very simple function which is just reading some config settings and returning them.

From here we need to go to our Build process in Azure DevOps.  The build process looks like the following: 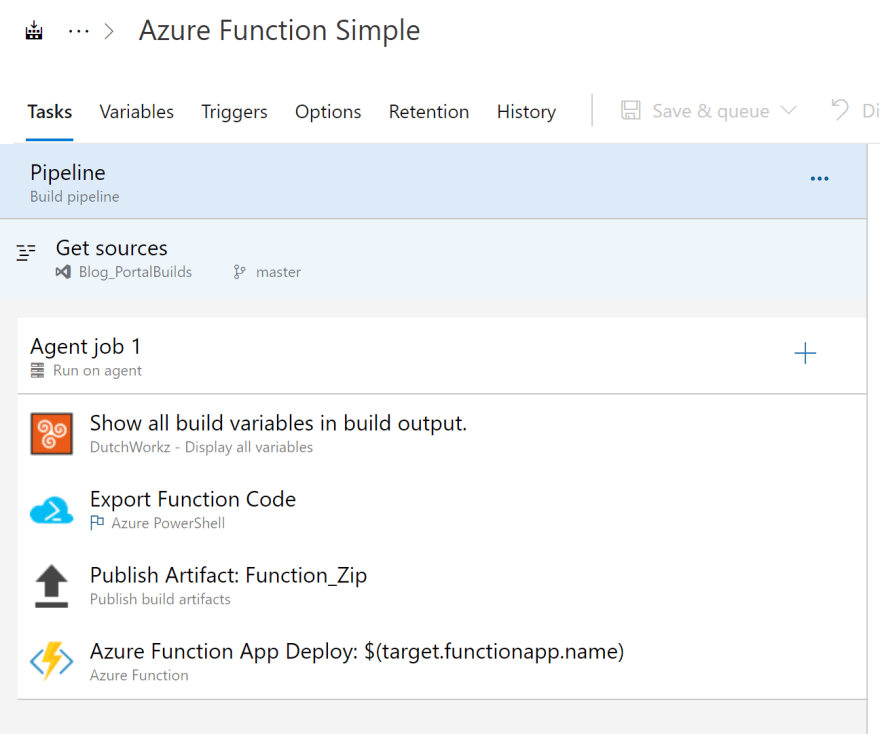 I have defined a build process which I could use for any function app in the portal.  I would simply need to change the variables and subscriptions references and it could be reused easily via the Clone function.

The build executes the following steps:

A closer look at Export

I think in the build process the Export Function Code step warrants a closer look.  This step uses Powershell to execute a web request to download the code as a zip file.  I have used the publisher profile in the function app to get the publisher credentials which I can save as build variables and then use as a basic authentication header for the web request to do the download. See the below piece of code

The Azure Function app deploy is simply using the out of the box task.  I am pointing to the zip file I have just downloaded in the earlier step and it will automatically deploy it for me.  I have set the deployment type on this task to Zip deployment. 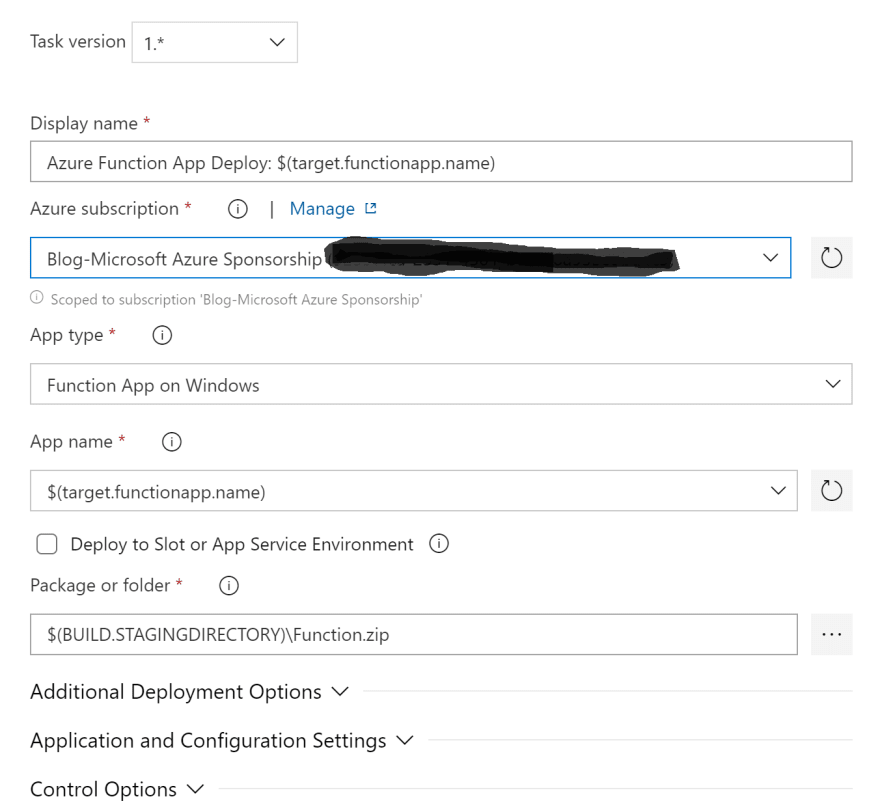 We now have a repeatable build process which will take the latest version of the code from my development function app and push it to the test instance and package the zip file so I can at some future point release this version of the code.

To do the release to other environments I have an Azure DevOps Release pipeline. You can see this below: 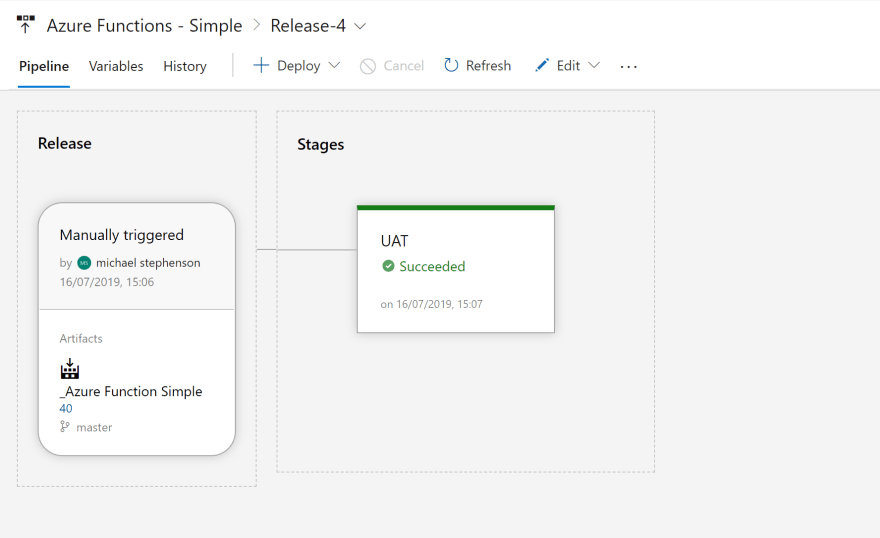 The Release pipeline contains a reference to the build output I should use and then contains a set of tasks for each environment we want to deploy to.  In this case its just UAT.  The UAT release process looks like the following: 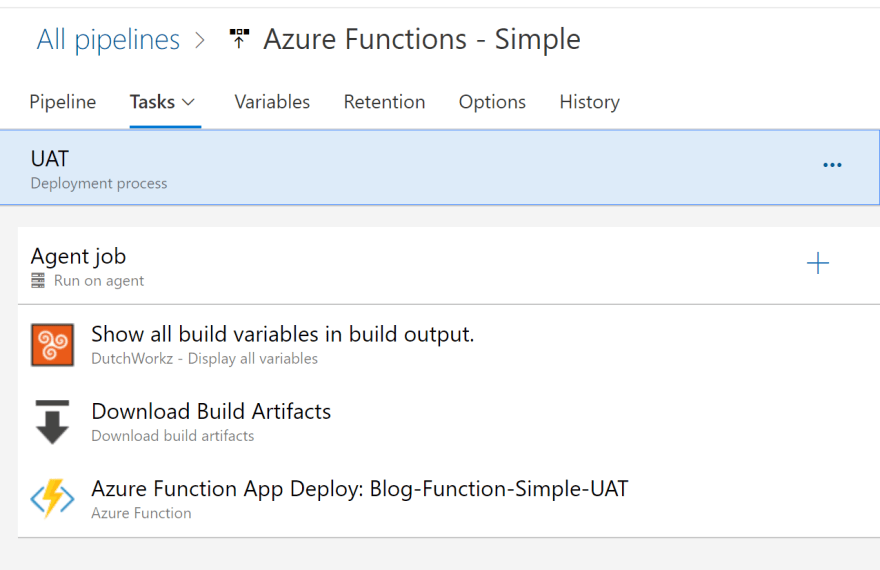 You can see that in this case the Release process is very simple and really it’s a cut down version of the Build process.  In this case, I am downloading the artifact we saved in the build.  We then use the Azure Function deploy to copy the function to the UAT function app.  We are just using the same OOTB configuration as in the above Build process but this time we are pointing to the UAT Function app.

I now just need to run the Release process to deploy the function to other environments.

Hopefully, you can see that it is very simple to implement the most basic of ALM processes for your development in the portal effort which will add some maturity to it.

Delete all users in an Azure AD Tenant programmatically