Disclaimer: this article is intended to be part of a Request For Comments on a language I am working on.

Note: I will be using bytecode interpreter and virtual machine (sometimes written VM) interchangeably throughout this article.

There are a lot of languages out there, and new ones are born everyday. We can often divide them into 4 categories:

Why targeting a VM?

It has many advantages, such as:

To add some personnal bonus points, I am often working with huge codebases in C++, thus a tiny modification often requires to rebuild nearly everything, not great when you want to make small adjustments to your NPCs movements or your animation controller. By embedding a VM to run an homebrew bytecode, I just have to write some bytecode to move my NPCs or play animations, bind the corresponding C++ functions to the VM, and voilà. Now you can modify the bytecode (often stored as a file) and avoid recompiling everything.

Baseline of a bytecode interpreter

A bytecode interpreter (or virtual machine) can be stack based, register based, or both, each having their own pros and cons. I'm not going to discuss over which one is better, that would take a whole article.

The main difference is that in a stack based VM, when doing something like 1 + 2, you push 1 and 2 onto the stack, then pop them and apply ADD on them, pushing back the result onto the stack. A register based VM would store 1 in a register r1, then 2 in r2 and run ADD r1, r2, r3 (result in r3).

Nota bene: this describes possible implementations, some may work in different ways, but those are the main ideas

Example of a stack based VM 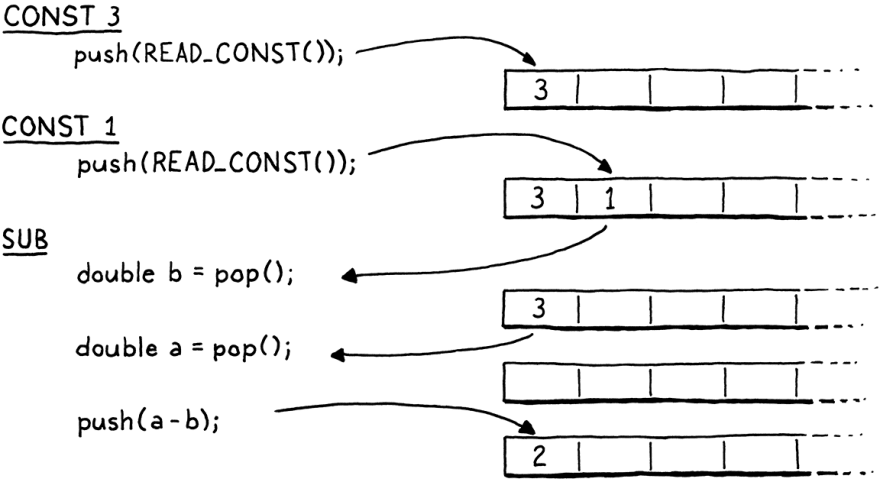 In the rest of this article, we will only be considering stack based bytecode interpreters.

A bytecode interpreter is intrinsically sequential, because of its stack:

We can not parallelize the value pushing / popping, given a single stack, because the order of the values on the stack is pretty important. For example, we wouldn't want to push 3, 5 instead of 5, 3 when applying the DIV instruction, because 3 / 5 isn't the same as 5 / 3.

Also, what if two threads were trying to pop the value on top of the stack, at the same time? Which one gets what? That's a concurrency problem, and to solve it we need to introduce a few constraints:

Given those constraints, we can ensure thread safety (no concurrent access to the same variable), to the cost of being unable to access a top level defined variable. This means that this code won't work:

Given a fourth constraint, we can make it possible:

This is quite restrictive, because it means that we will only be able to run other threads by stopping the main thread execution, thus limiting what we can do. Imagine that you have a game, and your rendering process would be in a thread. With this current design, it would be the same as having the game logic and the rendering in the same thread, since running the rendering function(s) in a thread would interrupt the main thread (assuming it's the game logic):

As stated before, concurrency problems can arise from having a single stack and multiple threads. One could say that a solution would be to:

After a few instructions executed by the new thread:

This is what is being done in Python (I am talking about the multithreading side of Python, not the multiprocessing one) and NodeJS (until recent updates at least), giving this type of execution:

It isn't what we could call "real" parallelism, since it isn't benefiting from the processing power of more than a single core. Notice that I left some space between tasks, because the bytecode interpreter needs time to do its context switching (dumping the stack state and loading another one), which makes the whole code run slower instead of faster, since we now have

a being the number of times we need to context-switch.

Our goal being true parallelism and exploitation of more than a single core processing power, we can't use this approach.

The idea is described in "Running Parallel Bytecode Interpreters on Heterogeneous Hardware." (Juan Fumero, Athanasios Stratikopoulos, and Christos Kotselidis. 2020), where they implement a minimal parallel JVM clone, to run with OpenCL. Their project here takes advantage of the parallelism at compile time by introducing instructions such as PARALLEL_GLOAD_INDEXED <idx> to tell their VM which heap they should write to/read from. This is better than what we described above, because by indicating which heap is accessed, you can more easily get rid of the concurrency problems at compile time (instead of at runtime, while some guards could still be implemented).

This is quite complicated work for a project like ArkScript, thus I am going with a simpler approach, without needing to update the compiler, making this a performance enhancement integrable in many other bytecode interpreters.

We introduce n + 1 structures for RunTime Information in the VM, to keep track of

We have n "RTI structures" for n different threads, plus another one for the main thread, which will have a bigger stack than the others, about 8 to 32 times bigger, giving small stacks for the threads to keep them relatively lightweight. Our context switching will only consist of telling the VM which "RTI structure" it should draw information from.

This will make the VM larger (depending on what value of n we choose), thus we have put a limitation on the size of the threads stack. 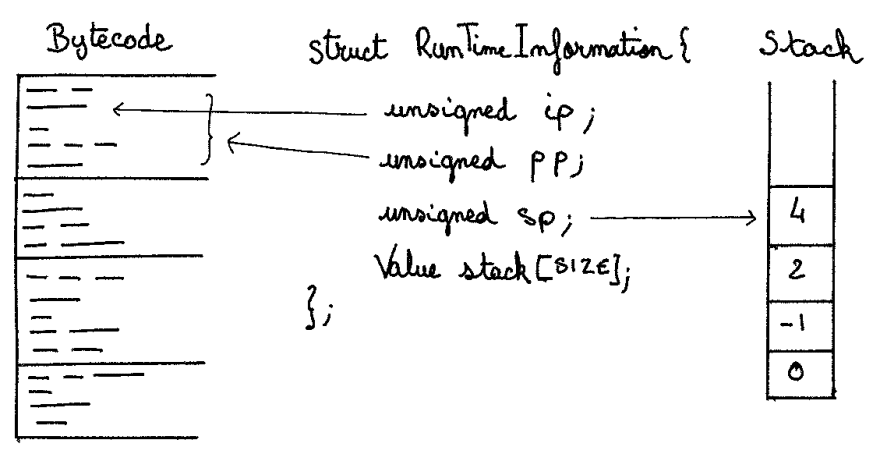 This implementation doesn't prevent us from calling other functions in threads, as long as the thread's stack has enough space left, because they will be running on their own stack, their own locals, without disturbing the others threads. The only limitation as stated a few paragraphs before, is that the programmer must ensure that they doesn't (try to) modify global scope variables from parallelized code (we will discuss that again later).

We will have to implement parallel builtins, such as parallel/for <list> <function>, which would divide the work on the list evenly accross the available cores, given a maximum of n cores at the same time since we have a fixed number of "RTI structures", thus a fixed number of stacks to operate on.

Choosing the right amount of structures (and stacks)

The choice of the value of n isn't straightforward and depends on the type of hardware we're aiming for. Since our language is only released on 64bits platforms, which are quite modern, we could chose a value of n matching the current market value. The maximum number of cores per CPU has drastically increased for a few decades now: 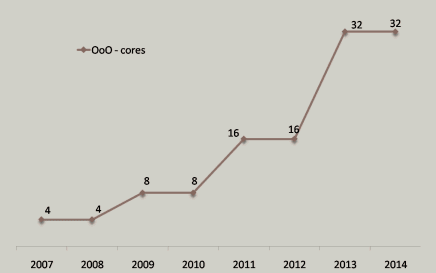 From Design for Manycore Systems

and it's pretty common to come accross 4-cores or 8-cores CPU, thus it would be enough to have n=4, so that we don't waste too much space with unused "RTI structures", and have enough to use more CPU processing power. Some may argue that 64-bits dual cores processor exists and I acknowledge this fact, but with 2 "RTI structures" used out of 4, we won't waste that much space since the stacks of each structure is 8 to 32 times smaller compared to the main stack (about 8192 values in our implementation).

Of course this discussion on the choice of n is important only if the allocation of the structures is static, which will most likely be the case in our implementation for performance reasons, but you can still go with a dynamic approach and forget about that.

Handling variables out of the thread scope

It is still unclear if it is the VM role to tell the user that they can't write to a variable outside a thread scope, or if it's up to the user to guarantee this: it will depend on the type of the language implementing this technique (high or low level) and on the presence (or lack of) synchronization procedures (such as semaphore and mutex).

However, ArkScript being an high level language, this would most likely be a runtime check (or even better, if possible, a compile time check) to help the user catch such problems. This could result in a single check on the current "RTI structure" when executing the instruction STORE value symbol: is it a symbol defined in the current structure or in the main one? If it's the last one, then the thread is trying to write a variable which doesn't belong to it.

This article was trying to bring details about how parallelism could be introduced to a bytecode interpreter, even though it's not perfect since we need to halt the main thread. However for our project, it doesn't seem like a big deal, since it would still help with speeding up the language processing power on many algorithms, as well as allow us to avoid adding synchronization procedures such as await.

Information: all the images without Source: <link> beneath them were producted by me, you may reuse them without citing me if you want to

How to QuickStart Secured Rest API Project With Laravel 9 ?

How to debug a specific Gatsby package on build

howto use Ubuntu and Windows simultaneously, in 2022