TL;DR: api-test is an API testing framework for the terminal that lets you organize test cases in JSON files, run them simultaneously, and add automated tests to your API.
Repo link: https://github.com/subeshb1/api-test
Docs: https://subeshbhandari.com/api-test

When it comes to testing an API from the terminal the first thing that comes to anyone’s mind is curl. It is quite a handy tool until you have a large payload that you need to constantly change and paste it in the terminal again and again for each case you want to test. Especially when you are testing private APIs using the terminal provided by Cloud9.

So, I decided to create a JSON API testing framework named api-test to help organize testing strategies and automate the process from development to production. It leverages the power of curl to make API requests and jq for JSON processing. So you would need to install curl and jq.

This will clone the bash script, make it executable and copy it to /usr/local/bin so that it can be accessed from any path.

The main principle is to define your API test cases in a JSON file and perform tests on them. A sample test case definition will look something like this:

There are two main components in the test file:

The root header property stores the common headers like Authorization, Content-Type, etc and are injected across all test cases. You can also specify headers in individual test cases.
You can have path,body, header,query and method in a test case. Additional property expect is also available for automated tests which we will be discussing later.

Now let’s call our first API route. To run a test case, we have a command named run. It takes the test case key as an argument.

Note: Test file should be provided as well

This will generate the following output: 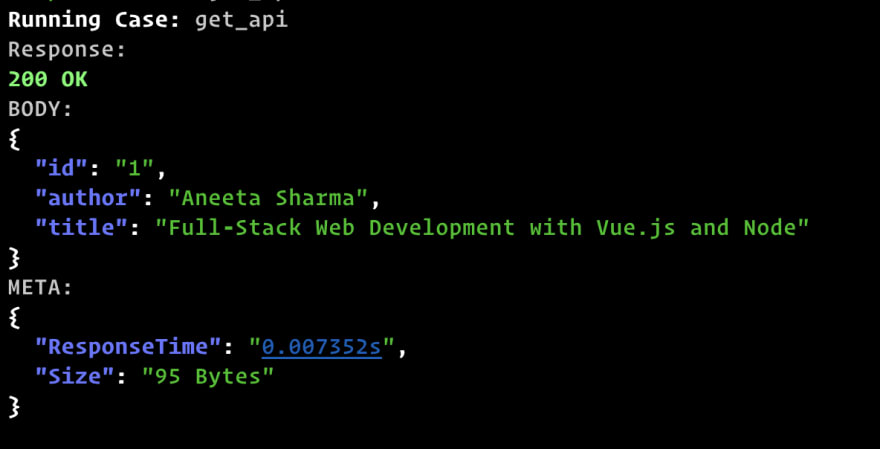 Now, let’s try out the case where it returns 4xx response. 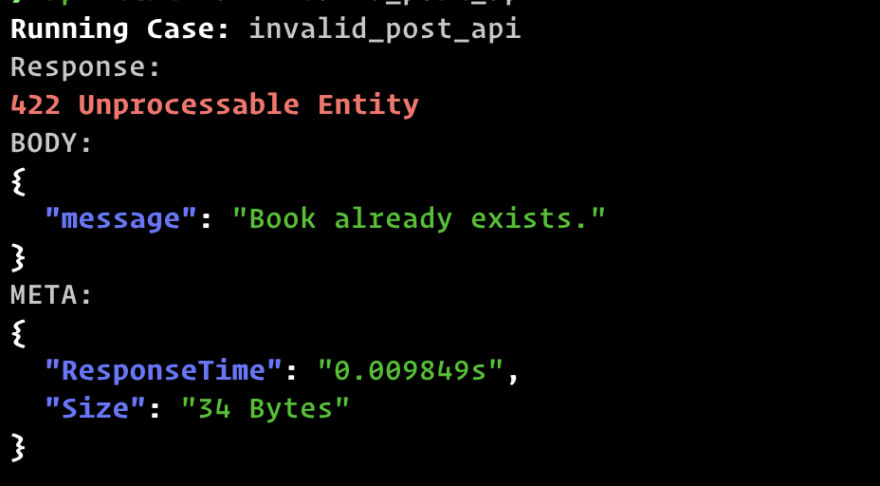 You can also call multiple API routes at once,

If you also want the header information you can pass in -i as a flag. See more use cases by running api-test -f test.json run --help.

Let’s add some tests to be more clear:

The tests are written in expect property of each test case and checks can be made for both header and body response.

In the response body of get_api we know the response will contain a property author and with value Aneeta Sharma we add a contains check to match the subset. Similarly, for the values which are dynamic, we can check if the key is present using hasKey check.
For the invalid response, we know the response as it is expected to be static. So, we can have an equality check using eq . The eq the check will compare all the object value irrespective of the key order.

The checks path_eq and path_contains are similar to the ability to make comparisons at any depth of a JSON object. See the docs for more information.

To run a test case the command test is used. 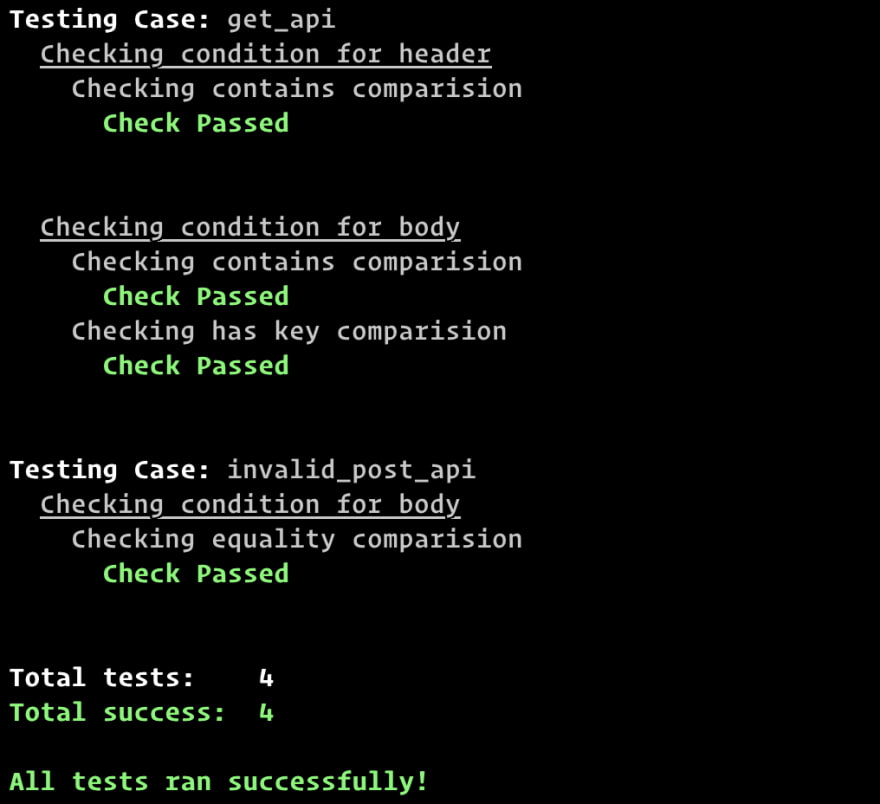 Now let’s break the test to ensure it is working correctly. I will alter the eq check for invalid_post_api by adding extra spaces in the text. 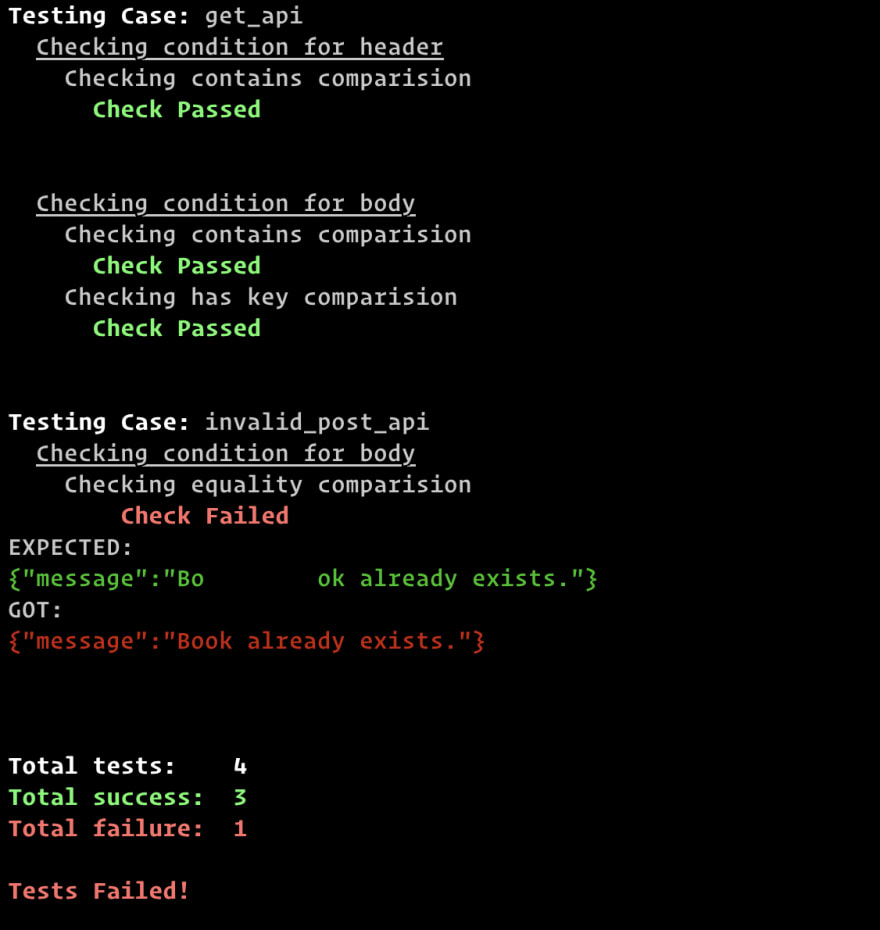 Great! Now we know that our earlier tests were running properly.
If the available checks don’t match your need, api-test also provides a way to inject a script or program written in any language to check and compare values.

To do so, provide the executable you want to run in external the property of expect block. Below is the example using node js.

And write the comparison file as:

The program should exit with code 0 on success and code > 0 to communicate failure.
Now, you can perform any type of comparison you like!
When the development is completed, we can change the variables in the test file and start running the automated tests in the staging or production environment. Just be sure you don’t run an update or create a request on critical data. The automated tests can also be integrated into the CI workflow. When all tests pass it exits with code 0 and when some or all tests fail it exits with code 1.

If you are testing private APIs or only have access to the terminal, api-test is a tool for you. You can structure test cases in a JSON file, write automated tests, and run the same test cases in all the environments without having to worry about anything. It will help ease out the testing process from development to production removing manual checks.

Subesh
How do You Tell if a Project is Maintained?
#github #opensource #discuss
Explain "Code Smells" like I'm five
#explainlikeimfive
How much experience you had, when you got your first dev job?
#watercooler #career #motivation #beginners