At Stack Overflow, one of the main things we're working on is improving the ways our Q&A system facilitates feedback among users. Our user base plays an important role in not only answering questions asked by thousands of people per day, but also in helping to ensure that Stack Overflow is valuable as a resource which helps our future selves, too. This means that in many ways there are real people behind the keyboard using our software interacting with each other and influencing experiences people have (good and bad). Stack Overflow users deserve a system that sets everyone on all sides up for success. 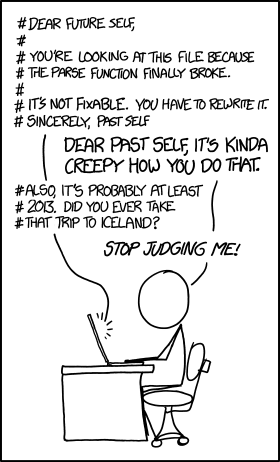 Today, an essential part of how feedback is relayed among users on our site is our system for closing (and reopening) questions. While it was originally designed to help facilitate the creation and preservation of high quality question and answer artifacts, it's also a source of a lot of friction for our users. You ask a question on Stack Overflow because you think you can get an answer there. Getting your question closed today can be confusing, frustrating, and sometimes even unjustified.

So, what are we doing about it? We're taking a three-pronged approach:

In the rest of this post, I'll describe a recent observational experiment we ran as an example of approach #2 including what we observed and our thoughts on next steps (which I'd love your feedback on!). Shog, a Community Manager at Stack Overflow, and I published a longform version of this write-up on meta. This is mostly Shog's write-up; I contributed the charts.

In August, we ran an observational experiment on Stack Overflow in which we reduced the number of close/reopen votes required to close/reopen a question. Our main hypothesis was that this would make the system more efficient. We operationalized "efficiency" to mean, if a first close vote is cast, that question is more likely to ultimately get closed (same for reopening).

Why do we care about efficiency? For users whose questions are closed in the current system as it works today, we'd prefer that their questions get closed sooner before attracting downvotes/discouraging comments. And for users who volunteer to review questions ("curators"), if their vote does not result in closing or reopening, it should be because other members of the site reviewed it and decided that outcome was unwarranted; the vote should not be ignored.

As with all experiments (observational or experimental) and product changes we make on Stack Overflow, we also monitor other metrics. Some of the other factors we looked at:

Our hypothesis was confirmed. The close/reopen system was more efficient across the board.

Very importantly, the total quantity of questions nominated for closure stayed about the same, even as efficacy -- questions actually getting closed -- went up. This means that the experiment didn't trigger a wave of close voting.

We heard the most from our active, engaged users on meta who represent the curator side of this equation. From them we heard optimism and motivation to participate in the site plus a lot of thoughts on how the experimental threshold would impact the close system including users implicated in it.

We supplemented this feedback by looking at responses to our site satisfaction tracking survey which we recently started as a way to get more diverse feedback from Stack Overflow users. On the survey, we regularly see people mentioning closing as one of the most frustrating things about using Stack Overflow. During the experiment, we saw a slight uptick, but it wasn't anything significant. This is something we'll continue to monitor.

If you have thoughts, I'd love to hear them in the comments here!

Right now, a very small group of people participate in closing/reopening and reviewing questions that have been voted to be closed/reopened. As long as we have the same system in place, we would prefer greater diversity among the people participating. 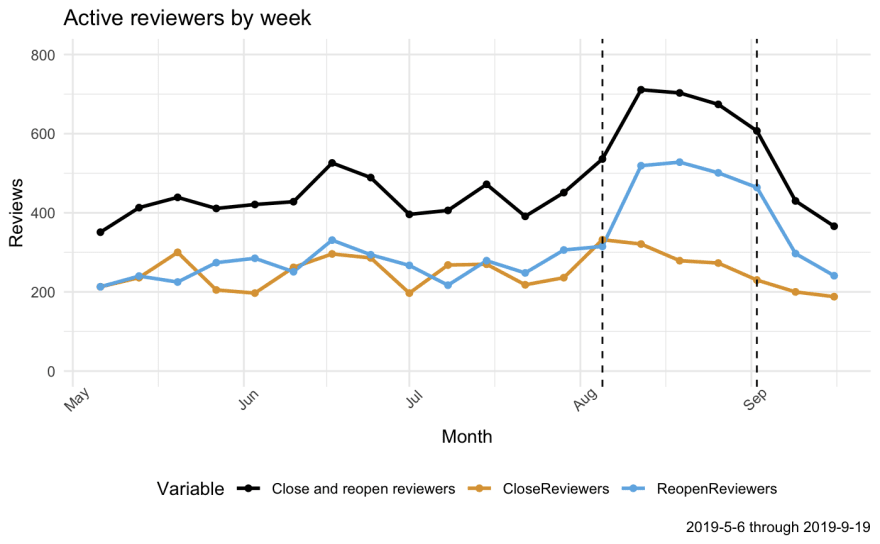 During the experiment, we saw more participation in reviewing questions. This was driven by an increase in reopen reviewers. 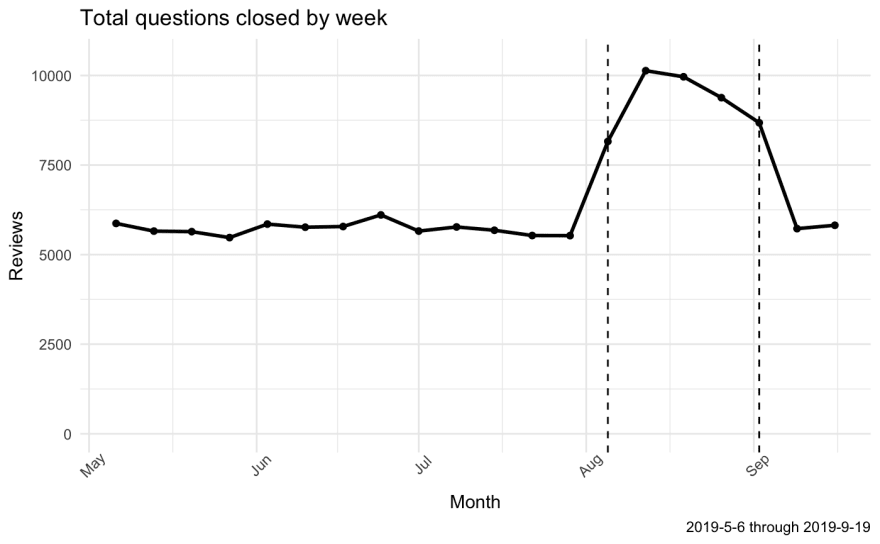 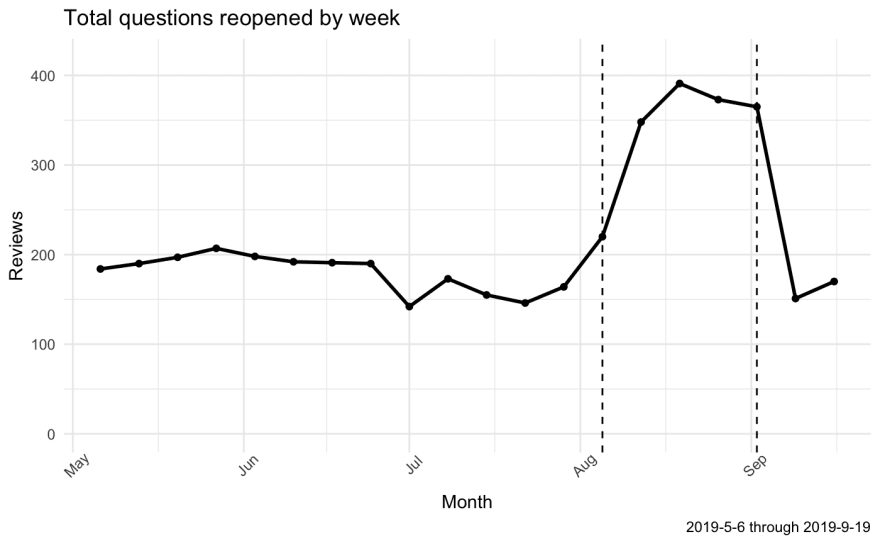 During the experiment, we saw an even larger relative increase in the total number of questions reopened.

A "close war" is when a question is closed, reopened, then closed again. Did lowering the threshold required to close/reopen a question result in an increase in their occurrence?

We did see an increase, but close wars are actually already relatively rare on Stack Overflow. We aren't too worried about this.

During the experiment, it was much easier to close a question without consensus among close reasons.

This is more concerning to us. It's an emergent behavior of the lower close threshold which we're not as happy to see.

Conclusion and call for feedback

From this experiment, we've concluded that a lower close/reopen vote threshold successfully increases the efficiency of the system. This has positive effects on our curators who volunteer to review questions and we hypothesize that it's a better experience for users who ask questions (though we'd love to hear more feedback from you!). It was especially encouraging that there was NOT an increase in the number of questions that were voted to be closed even while participation in the process increased.

Based on these results, we have learned that we would like to implement a consensus rule before lowering the close/reopen threshold to 3. That is, a question must receive n close votes have to agree before a question gets closed.

Our thinking is that a consensus provides more confidence that question should be indeed closed AND gives the question author more concrete feedback which they can learn from or act on.

Music Monday — What are you listening to? (70's Edition)

Once suspended, stackoverflow will not be able to comment or publish posts until their suspension is removed.

Once unsuspended, stackoverflow will be able to comment and publish posts again.

Once unpublished, all posts by stackoverflow will become hidden and only accessible to themselves.

If stackoverflow is not suspended, they can still re-publish their posts from their dashboard.

Once unpublished, this post will become invisible to the public and only accessible to Megan Risdal.

Thanks for keeping DEV Community 👩‍💻👨‍💻 safe. Here is what you can do to flag stackoverflow:

Unflagging stackoverflow will restore default visibility to their posts.