For my day-to-day work, I use TablePlus to develop/maintain various postgres and mysql databases, which I can honestly recommend as a pretty great query browser.

Like any other piece of software though, it has its warts, among which are sub-par query formatting and odd text-editing keybindings. This isn't helped by the fact that I use Kakoune (a text editor that's built around doing vim "the unix way") for most of my text-editing activities. I also use tmux for a window manager, since Kakoune doesn't come with one.

So I asked myself: instead of wishing there were Kakoune-like editing abilities in TablePlus, what if I put sql into Kakoune? It turned out to be easier than I imagined because, well, unix.

To start with, I created a directory to put all my scripts and sql-related projects:

Creating a place where I can edit queries was as simple as creating a sql file, opening it in Kakoune, and copying my query-in-progress into it. 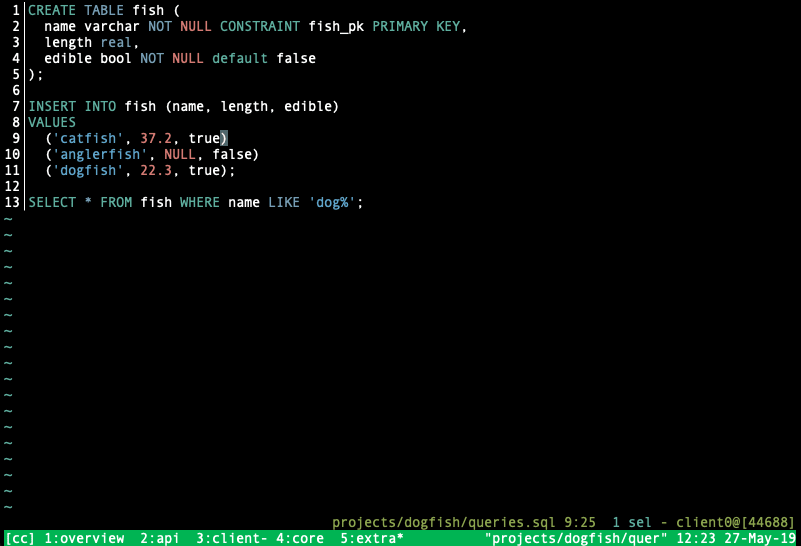 Thinking ahead a bit, that looks problematic. If I'm developing that last query, I don't want to run the CREATE TABLE query every time! Easily solved: 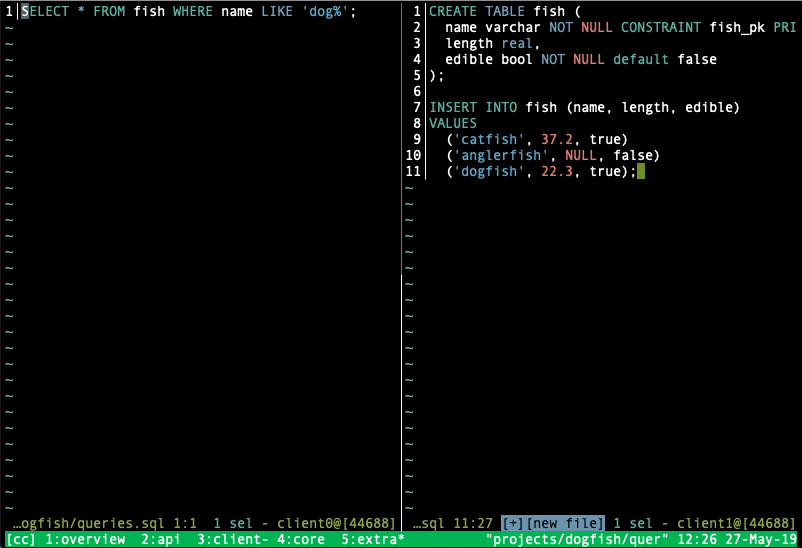 Now I can run the setup query once on the right, close that tmux pane, and get to work on the query I'm developing.

Now that I have some sql files, I can run them using the psql command line tool:

Let's generalize this by saving it to a script called run.sh.

After a quick chmod +x ./scripts/run.sh, we can run our queries file with ./scripts/run.sh projects/dogfish/queries.sql. Notice that I'm passing the rest of the arguments directly to psql so we still have access to all of its command line options.

Developing with a feedback loop

I love quick feedback when I'm working. I almost always have some tests running in another window, or hot reload turned on for my app. We can do the same thing here, too.

This one uses find along with entr to watch the given query file and run it when it changes.

Note that I don't recommend this if you're going to be using this technique in production. It's much better to create a custom command that explicitly runs your query. For me, I want a fast feedback loop in development, so file watching fits the bill.

We can start our watcher (don't forget to chmod +x it) with ./scripts/watch.sh projections/dogfish/queries.sql. Now every time we make a change to the file, it runs it and shows us the results! 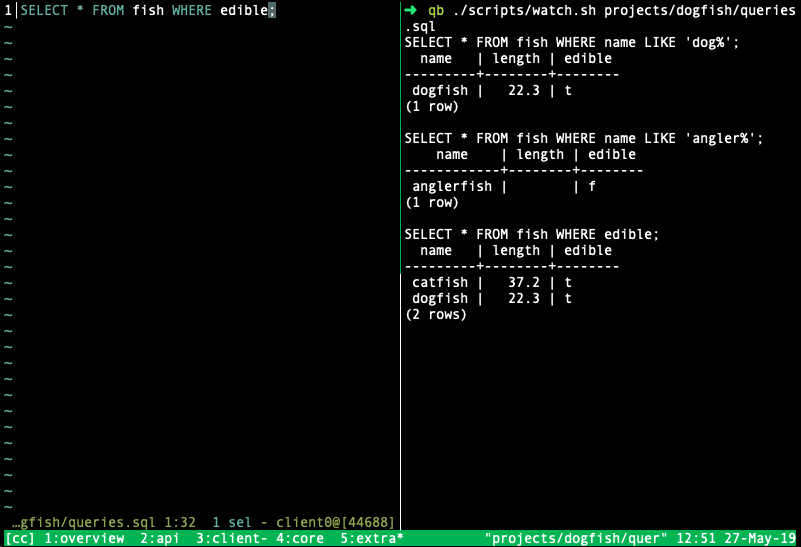 The possibilities with this technique are endless, but let's cap it off here with adding auto-formatting to our query browser. If you're following along, install pgFormatter for your OS (brew install pgformatter works on OSX). Now, save a new script to ./scripts/format.sh:

Chmod it and add it into our watch script:

And now we have automatic query formatting:

Obviously this isn't a full-featured query browser, but for me, the longer I develop software, the fewer features I want in the software that I use. Kakoune is a great foundation for building custom, minimal tools for day-to-day use. And, of course, this technique isn't limited to Kakoune — it's just a matter of building small tools that do one thing well, and composing them together.

I do encourage you to try Kakoune out if you haven't! Its learning curve is not beginner friendly, but it does pay off for the dedicated student.

Renaming a table in production in PostgreSQL

Once suspended, staab will not be able to comment or publish posts until their suspension is removed.

Once unsuspended, staab will be able to comment and publish posts again.

Once unpublished, all posts by staab will become hidden and only accessible to themselves.

If staab is not suspended, they can still re-publish their posts from their dashboard.