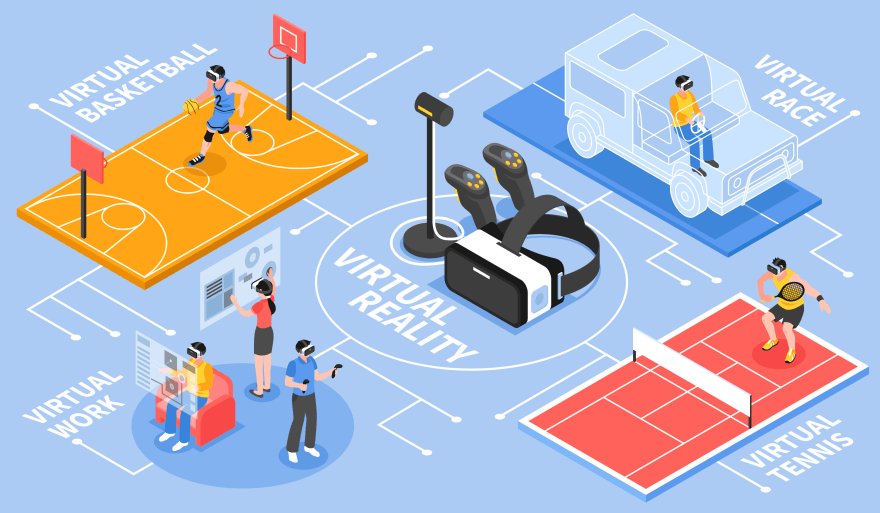 Among numerous opportunities offered by virtual reality, people are really excited at the prospect of being able to watch live matches on their smartphones through a head-mounted display. Be it a baseball game, or a football game, everything can be streamed while feeling the aura of actual matches in the stadiums from the comfort of their home. It’s high time sports organizations started amplifying sports experience making it more immersive in every possible field, such as content consumption and athlete training.

Here are a few use cases of how VR is set to revolutionize sports in the upcoming years:

Viewing sporting events in VR based apps on mobile phones

Something that is seen a lot these days is the use of 360-degree cameras to broadcast and stream sporting events in virtual reality. In most cases, a VR headset and an app are only things one will need to enjoy the stadium-like setting as the action begins unfolding, all at the comfort of their home. It could become the most realistic simulation one might get from viewing a sporting event without attending physically.

Reimagining the action in VR

Numerous initiatives are undertaken to make an exhilarating VR video streaming of sports events a reality. There are startups working to gather data from teams and games to develop a sports experience full of action, and fun. Users wearing VR headsets can explore the game from multiple angles in the stadium, including the perspective of players, fans, or officials.
The mobile app can be of great use to sports teams also, who can use it to replay and analyze the game from various perspectives.

Professionals have used media films for checking their personal performance as well as to assess opponents. However, the vantage spot is very different from the physical stadium game. Hence, the results aren’t quite optimal. These days, coaches, as well as players, can choose to train better through experiencing and viewing games on and on again in virtual reality-based mobile apps.

Today, VR for sporting events is extremely limited, hence is an opportunistic area of investment. A higher engagement as compared to what traditional broadcasters drive and multiple ways to monetize apps through in-app advertising can be leveraged. So, begin your quest to offer a fun-filled remote and live sports experience in the most futuristic and inventive ways through AR/VR technology. Get in touch with an AR/VR mobile app development services company today.

Intro to reactiveUtils in ArcGIS JSAPI

Back to basics: Data fetching in React

Avi
RPA Developer.
As a developer, I love ... ?
#discuss
Pitch me on C++
#cpp #discuss #pitchme
What tools do you use?
#discuss #tooling #productivity