Of all my favorite tools, LINQPad is probably the favorite. I use it every day, several times per day.

In 2007, Microsoft's .NET 3.5 introduced (L)anguage (In)tegrated (Q)uery, one of the killer features of .NET, and Joseph Albahari introduced LINQPad almost immediately afterward, providing the ability to do database queries using LINQ as an alternative to SQL.

Here's a screenshot from an early version of LINQPad (it still pretty much looks the same): 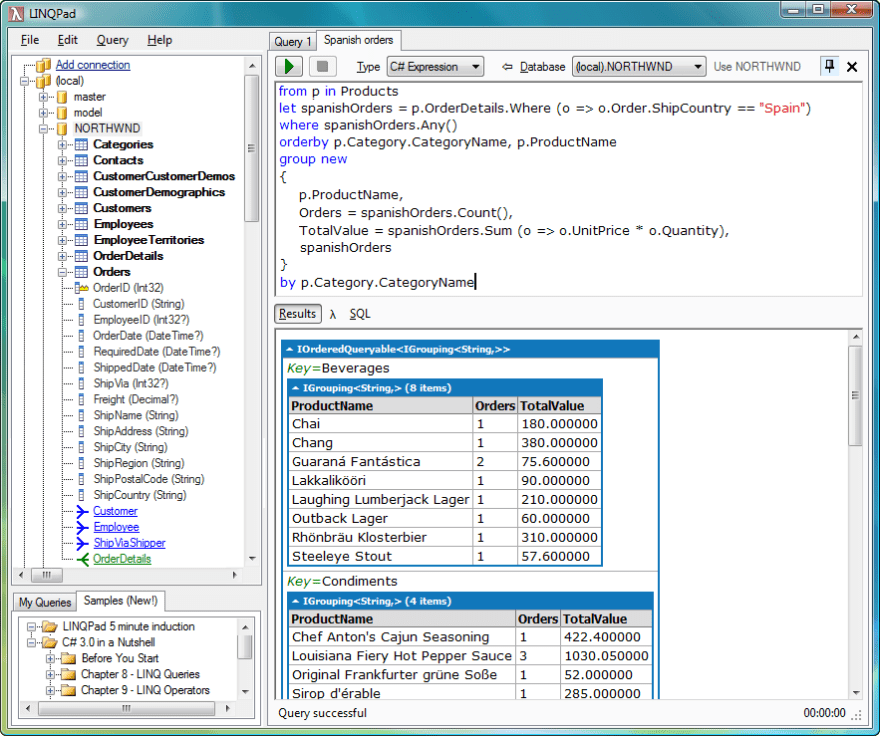 The screenshot above uses LINQ "query syntax", but of course, you can also use "method syntax" (.Where, .OrderBy). That's because LINQPad isn't just for LINQ and databases - It's for any any C#/F#/VB expression, statement block or program...

If you want to quickly try out some code, instead of creating a console app in Visual Studio, you can just open up LINQPad and and type a line or two...

I use it a lot for quick code experimentation, and have amassed a collection of tiny utility "program" queries in LINQPad (JSON and XML formatting, removing line feeds and tabs from strings, etc.), but working with databases is LINQPad's main claim to fame...

As shown in the animation below that I "borrowed" from Jiří Petržilka's blog, if you query a table with foreign keys, LINQPad shows those relationships as navigation links to those entities:

Querying with LINQ is what LINQPad was created for, but you can also query with plain old SQL:

If you do query with LINQ, you can click the results "SQL" tab to see the SQL that was generated:

I almost never use SQL Server Management Studio for SQL queries any more. 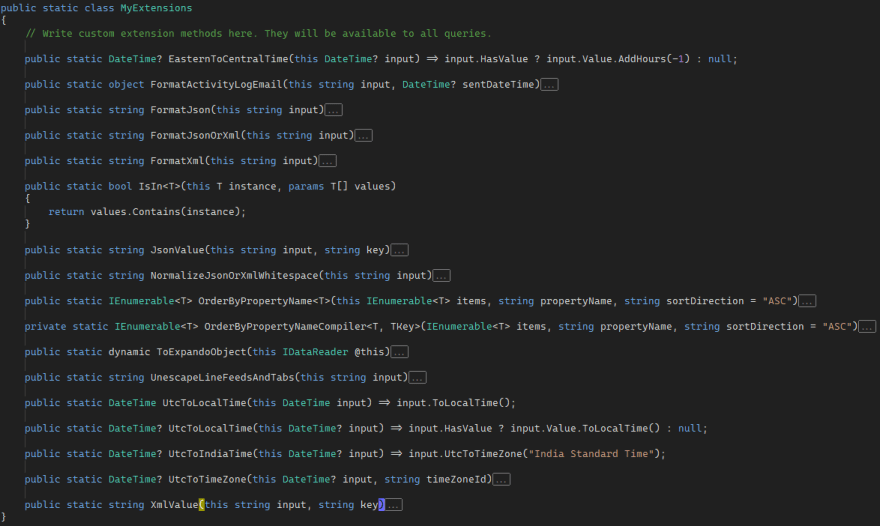 In this example query, the underlined code uses extensions I wrote to:

There is a free version, which I'm ashamed to admit I used for probably thousands of hours before finally doing the right thing and sending some money Joseph's way.

I urge you to give it a try.

You can learn more about LINQPad and download the installer from
https://www.linqpad.net/.

First experience with EPPlus and WPF

What Important Features We Developed In 2022

Once suspended, sparky will not be able to comment or publish posts until their suspension is removed.

Once unsuspended, sparky will be able to comment and publish posts again.

Once unpublished, all posts by sparky will become hidden and only accessible to themselves.

If sparky is not suspended, they can still re-publish their posts from their dashboard.

Once unpublished, this post will become invisible to the public and only accessible to Brian Schroer.

Thanks for keeping DEV Community 👩‍💻👨‍💻 safe. Here is what you can do to flag sparky:

Unflagging sparky will restore default visibility to their posts.