This is a series where I document discoveries in my Journey to SQLAlchemy. If you haven't seen my previous posts, check them out - they are somewhere at the top and bottom of this page.

NOTE
This journey is quite technical. Basics understanding of SQL is a requirement. Only shallow touches will be given to SQL query syntax on this guide as our focus is on SQLAlchemy.

Database as a data store supports different languages to construct and interact with the stored data. Below is a brief intro to the languages:

To setup codebase structure, visit SQLAlchemy with Docker - The Structure

We'll be working with two files in this journey

Lets assume, each time we have a craving, we get to track it and update any of the tracked record after the crave has been satisfied.

There are two tables in the blueprint - Item and CravedItem, each having 4 columns.

Lets use Data Definition Language (DDL) to define these structure where we'll track our records. This structure is called table in database world.

In db/scripts/queries.py add the following code

The first two lines imports, text from sqlalchemy and create_connection from database initializer that we created at journey's setup.

We define a create_item_table function. This function would create Item table with the exact columns as outlined on the blueprint with the help of connection instance returned by create_connection.

conn.execute( ... ) is non-autocommitting which means the SQL query taken by which is whatever is in text(...) is not automatically processed. We've to manually process each query execution using conn.commit().

text is a function which takes raw sql query. text function call returns an executable object which will be executed against the database by conn.execute() only when conn.commit is called

Replace run_db_select_statement() (from previous guide) with create_item_table(). main.py file should now look like this

Run python main.py from your terminal, you should have an output similar to what the image below holds

As an experiment, re-run python main.py, this should give you an error as there cannot be two Tables with similar name. Outputted error should be similar to the below.

DROP is a critical database clause/statement and should be used with caution. When used, it'll teardown/destroy the entity and whatever is in such entity. We created an Item table structure earlier, executing a DROP statement on that table will not only destroy the structure and make it unavailable, it'll also destroy the records in it.

Open up db/scripts/queries.py file and include the code below which is a new function that executes DROP statement on Item table.

Open up main.py file and import drop_item_table function. Your import statement should now look like

Open your terminal and run python main.py, this should delete the existing Item table. If you should uncomment create_item_table and comment out drop_item_table, making your code like so

Running python main.py now wouldn't give you the duplicate table error we had earlier as the existing table was dropped, instead you should now have the Item table recreated.

There will be less fun using RENAME statement if we can't see existing table. Open db/scripts/queries.py and include below code to retrieve (DQL) all available tables that are not autogenerated on database creation.

Import this function into main.py, and call it within the if block like below

Running python main.py should emit the existing tables in the database

Open up db/scripts/queries.py and include the following function which will rename existing Item table to Commodity

Now that we have rename_item_table function, import it into main.py and update if block

The if block code statement will display the available tables before and after execution of renaming Item table. After running above code using python main.py, we would no longer have a table named Item as it would've been renamed to Commodity.

Run above command using python main.py and you should have similar result 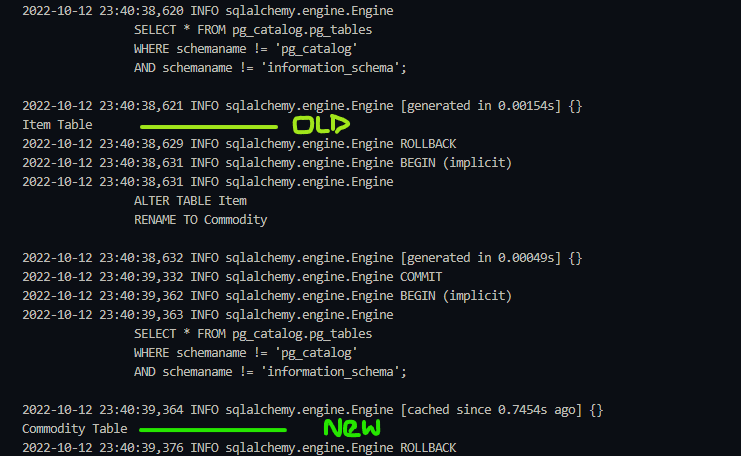 Exercise
Rename the table from Commodity to Item. Do note that we'll be working with Item table for future discoveries, ensure to complete this exercise

From our table blueprint, we had two tables, but so far we have only created one.

CravedItem table relates to Item table through FOREIGN KEY constraint, because of this, drop_item_table DDL query will fail at execution. This would warrant an update in the DROP statement used in destroying Item table

I only just showed the part that has been updated. The only difference is the CASCADE that's added

In summary, we've seen how to use CREATE, DROP, ALTER X RENAME DDL Clause to perform database interaction through SQLAlchemy. In addition we've maintained structured codebase by following the principle of Separation of Concern.

SQLAlchemy has more to offer

Although this raw query approach we've just taken has it's place of creating that awareness that this is possible in SQLAlchemy, by no means is this how SQLAlchemy is used in the real world on a day to day basis.

Thanks for sticking with me on this discovery. If you like this, don't forget to Bookmark it for later. Hit the Heart ❤️ button and do well to FOLLOW me so you're notified on the next discovery in this journey.

Once suspended, spaceofmiah will not be able to comment or publish posts until their suspension is removed.

Once unsuspended, spaceofmiah will be able to comment and publish posts again.

Once unpublished, all posts by spaceofmiah will become hidden and only accessible to themselves.

If spaceofmiah is not suspended, they can still re-publish their posts from their dashboard.

Once unpublished, this post will become invisible to the public and only accessible to Osazuwa Agbonze.

Thanks for keeping DEV Community 👩‍💻👨‍💻 safe. Here is what you can do to flag spaceofmiah:

Unflagging spaceofmiah will restore default visibility to their posts.