This post will explain how to setup automatic deployments to a Django Web-App hosted on PythonAnywhere.

What people normally do:
1. Everyone does this:

Let me first explain why I do this and then I will explain how to do this stuff.

Note: You are free to Jump to the Implementation section

Putting it simply GitHub is great place to collaborate and they have a better UI than PythonAnywhere to view code. Setting up PythonAnywhere's ssh access for everyone who will be working on the project is just too time taking for me and then again explain them what I did is another difficult task and that too if I have a paid account.

So, I thought it would be amazing if we can just push code onto GitHub and GitHub automatically updates the code on PythonAnywhere and not to mention the default features that are provided by GitHub like Pull Requests, Issues, Actions(haven't used them till now still a feature) and everything else that GitHub offers.

We will be using something known as Deploy Keys and Webhooks provided by GitHub to tell our Django Web-App tha it has been updated so it pulls the latest code.

Write the view function that will receive the update and update the code on the server.

Go to your views.py and add the following code:

You can also send response codes with them by passing the parameter "status" within the "HttpResponse" that will be returned.

Set the URL where the Payload from GitHub will be sent.

To add the payload URL add the following lines into urls.py file of your Django Project:

Now push this code to GitHub and login to our account on PythonAnywhere.

after this command you will be shown the following prompt:

Step 3: When you're prompted to "Enter a file in which to save the key," press Enter. This accepts the default file location.

Step 4: At the prompt, type a secure passphrase.

Step 5: Issue the following command on the bash terminal of PythonAnywhere to get your key.

then press CTRL+C to copy the key.

Go to your GitHub Account and then Go to the Repository in which you have your Django Project.

Step 1: From your repository, click Settings as shown below. 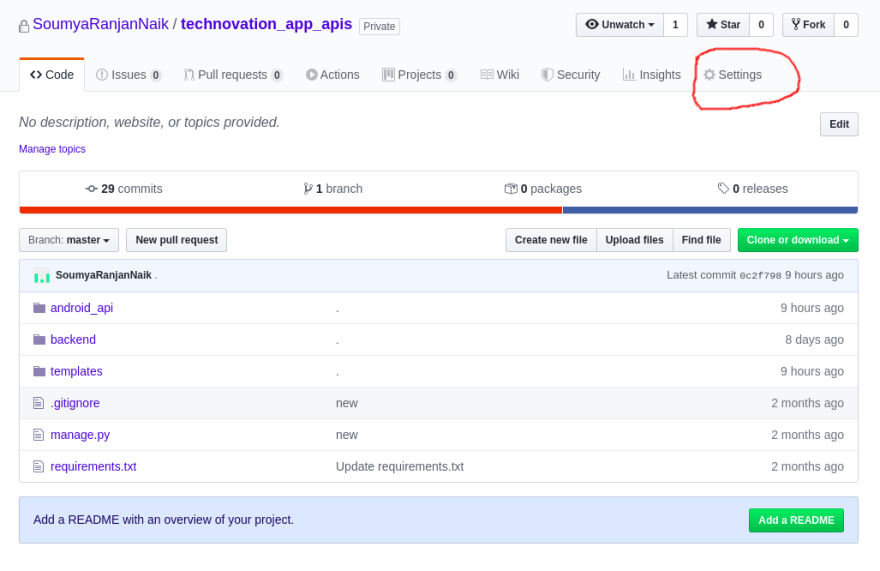 Step 3: Provide a title, paste in your public key. 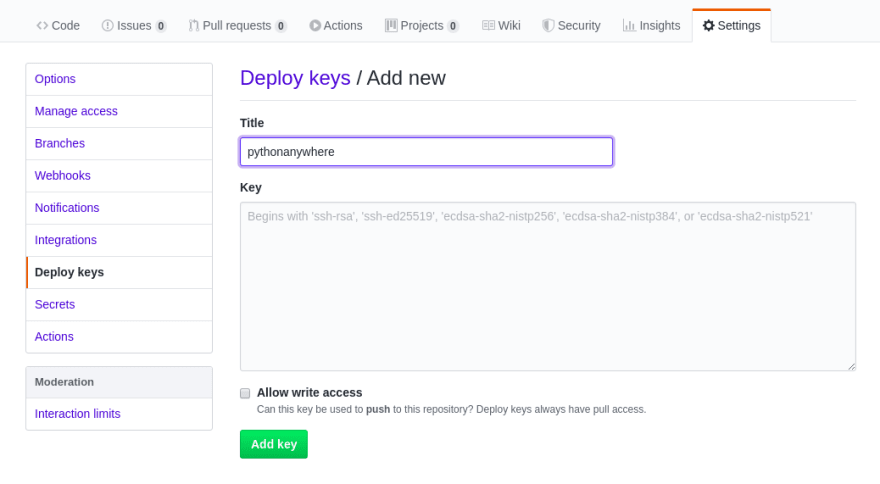 Go to your PythonAnywhere account and go to the bash terminal and setup your Web-App but use the SSH instead of HTTPS for cloning your Repository from GitHub.

Note: I would suggest to use the automated script pa_autoconfigure_django.py available in pythonanywhere package which can be installed via pip to automatically setup my project on PythonAnywhere.

If you already have a project setup on PythonAnywhere using HTTPS then open a bash terminal and edit the remote URL to set SSH by using the following command :

Go back to the settings tab of your Repository on GitHub and follow the following steps : 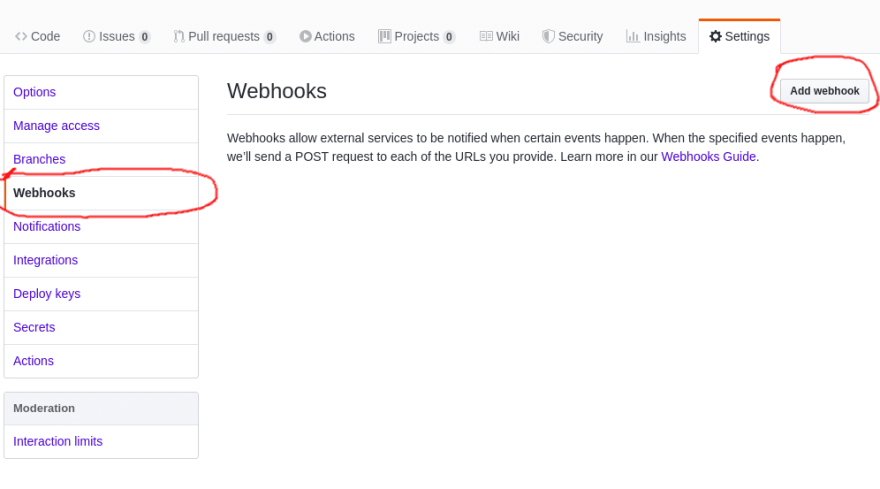 Step 2: Fill in the Payload URL and set the "Content type" to "application/json" as shown below. 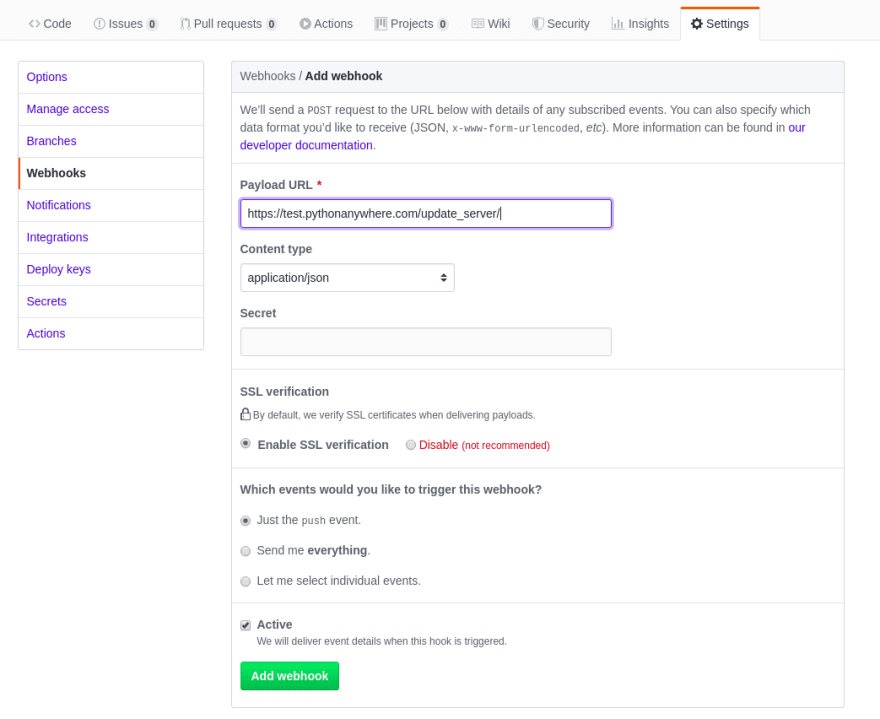 You will see the following when it is success

If it show some other icon in place of a green tick then click on edit and at the bottom you can see the "Recent Deliveries" here you can click on the button shown below to see the details of that delivery. 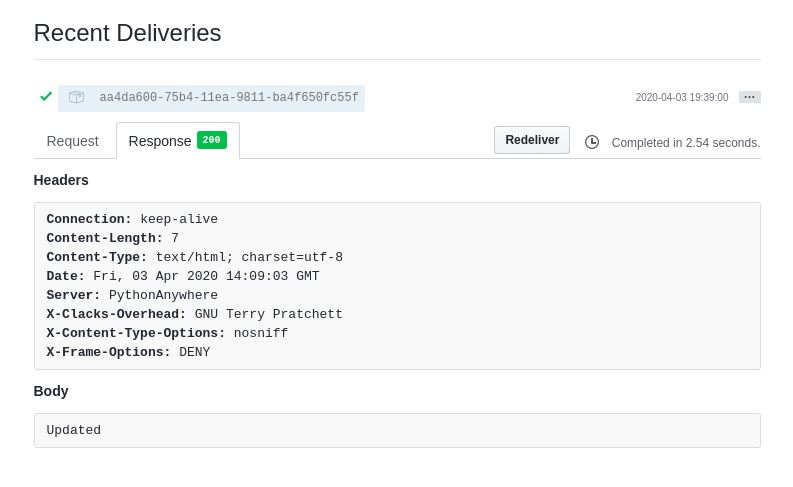 If you get any response code other than 200 then go to the error log on your PythonAnywhere account and check what's the problem.

The most common mistake that I make is when I return something else instead of HttpResponse it will throw some Attribute error.

If you get stuck somewhere then feel free to contact me on telegram using the link https://t.me/soumya_r .

Soumya Ranjan Naik
A Django Backend Developer and Cloud Engineer.
Is django underrated and node.js(express.js) overrated ?
#discuss #django #javascript #python
Is GitHub going to disable command line access for git ?
#github #git
Django vs Express/Node which one would you choose and why ?
#django #python #javascript #node